Original title: After Trump retweeted the “fire Foch” tweet, there is a follow-up!

Trump stated face-to-face: I will not dismiss Fuchs, “I like him. I think he is awesome.”

According to CNN, US President Trump briefed the White House on the 13th local time It was stated at the meeting that Fookie, director of the National Institute of Allergy and Infectious Diseases, would not be fired. At that time, Foch himself was at the briefing. The day before, Trump had retweeted a tweet with the word “fire Fitch”, which once triggered speculation. 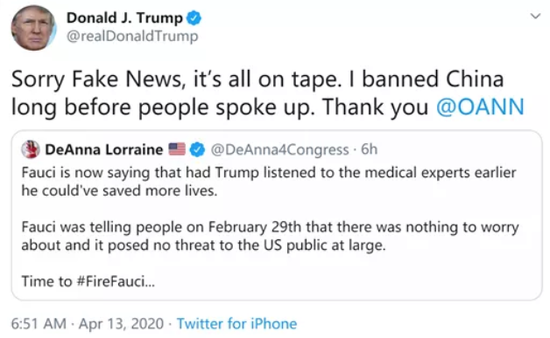 (Trump has retweeted a tweet that says “fire Foo”)

It was reported that at the press conference that day, he was asked When he noticed that the tweet he reposted had the tag of “fire Foch”, Trump admitted to seeing it, but at the same time said that it was another person’s tweet that he reposted, “that is someone else’s point of view.”

“I like him. I think he is awesome.” Trump said.

Trump also said that he and Fodge agreed, “we have been this way from the beginning.”

On the 12th local time, Trump retweeted a tweet that read “Dismiss Fuchs.” This tweet came from Rowling, a former Republican congressman of the United States. The tweet said: “Fuchs now says that if Trump listened to medical experts earlier, he could have saved more lives. But he was on February 29 Japan once told the public: there is nothing to worry about, the epidemic poses no threat to the American public … it ’s time to dismiss Foch. ” 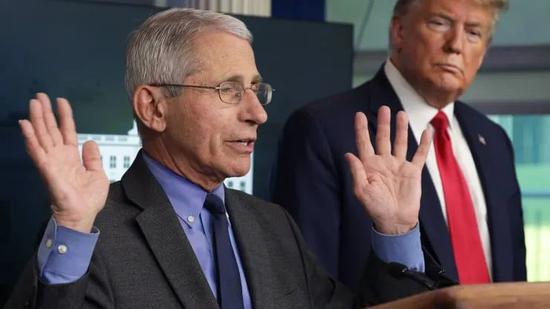 White House on April 13 During the epidemic briefing, in the , Trump and Foch (right)

past two days , the New York Times and other media and the Democratic Party have severely accused the Trump administration of delaying the fight against the epidemic. Trump criticized the media for “fake news” and also attempted to “throw the pot” against China and the World Health Organization. Fuchs had publicly corrected Trump time and time again on issues such as the time of vaccine development, the effectiveness of therapeutic drugs, and whether to insist on maintaining social distance, making Trump and the Republican right wing very dissatisfied. Dobbs, the Fox Business Channel host who has been supporting Trump, has criticized Fodge for being too cautious about experimental treatments. Gateway Pundit, a conservative right-wing website that enthusiastically supports Trump, accuses Fuch of the measures to encourage segregation as “destroying the economy,” and “indecent remarks have damaged the image of the president.”

Foch’s latest reason to anger Trump is a paragraph he said “accidentally” in an interview with CNN earlier on the 12th. When the moderator asked, “If the social distance and separation at home are taken from the third week of February, will it save lives”, Foch said: “If there is a continuous process, and it can start earlier By taking measures to slow down the spread of the virus, we could have saved more lives. Obviously, no one denies this. “The

British” Guardian “said that Foch’s statement confirmed the” New York Times “on the 11th about Trump repeated Refuse to report on social isolation across the United States. The New York Times on the 11th combed the entire process of the White House delaying the fight against the epidemic, accusing “Trump’s complete failure to respond to the epidemic.” “Washington Post” also previously said that the US government’s anti-epidemic decision was “overshadowed by denial and disorder”.

The US Capitol Hill quoted anonymous insiders on the 11th as saying that at the epidemic task force meeting held in the White House war room last month, Trump asked Fodge if the United States could allow the epidemic in order to preserve the economy. Scour “All America?” According to reports, the “washing” that Trump refers to clearly refers to the “group immunization” policy proposed by Britain at that time. At first, Fuch did not understand Trump’s meaning, but after a while he reflected what Trump meant by “washing out”, he was shocked. He said: “Mr. President, many people will die in this way.” In the end, Trump dismissed this idea.

According to the US Consumer News and Business Channel (CNBC) just news briefing at the White House epidemic Local 13, the US President Trump said the new cases of the new virus infection crown growth has stabilized, New York, etc. The number of new admissions in hotspots also decreased during the weekend, which provides “clear evidence that our active strategy to fight the virus is working.” 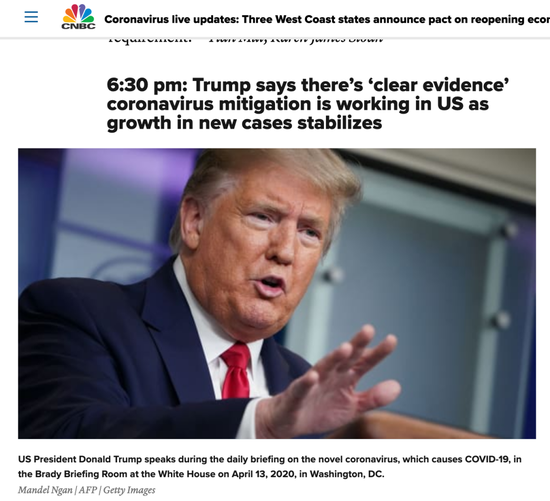