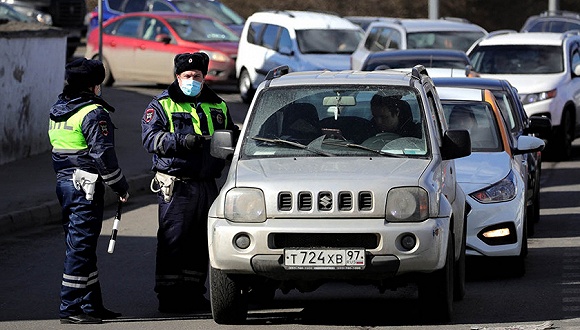 In the early stage of preventing the spread of the new coronavirus, Russia was one of the first countries to respond.

As early as January 30, Russia announced the closure of the Sino-Russian border port in the Far East and the suspension of the issuance of electronic visas to Chinese citizens. In February, Russia sent military aircraft to evacuate overseas Chinese from China, and then began screening passengers who arrived in Russia by air from China, South Korea, and Iran.

However, from the end of March, Russia, which seemed to have escaped the disaster, began to follow in the footsteps of other European countries, and the number of diagnoses increased. 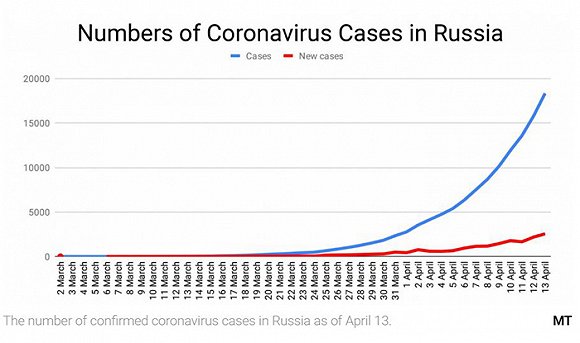 to April 13, according to the statistics of the Russian Center for Fighting New Coronavirus, 82 regions in the country added 2558 new cases in 24 hours, an increase of 16.2%, and a total of 18328 cases were diagnosed; There were 18 new deaths and a total of 148 deaths. Among them, the capital Moscow is the hardest hit area, with more than 11,500 cases diagnosed.

However, Moscow Mayor Sobyanin warned on Friday that Moscow is now only at the “mountain foot” and is far from the peak.

The next day, Kremlin spokesman Peskov continued to warn that due to the influx of patients into the hospital, the situation in Moscow and St. Petersburg was very tense, “Moscow hospitals are operating in a state of extreme emergency.”

According to Reuters, a long queue of ambulances appeared outside a hospital dedicated to treating patients with new crowns outside Moscow. An ambulance driver said that he had to wait in line for 15 hours to send the suspected patient to the hospital. 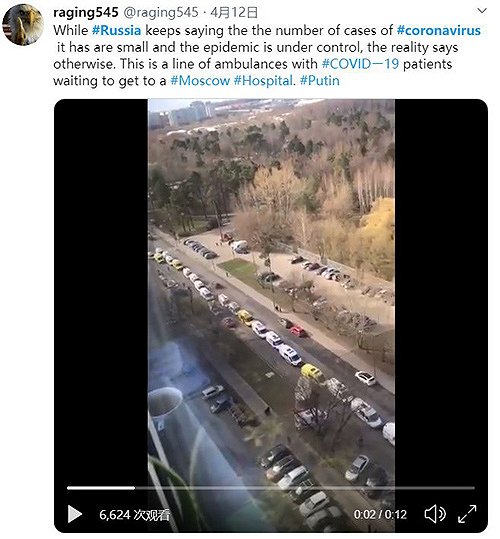 In Moscow, with a population of 12.5 million, the government has implemented a series of restrictive measures including a family order. This week, the authorities will also use digital licenses to monitor public travel. People who go out for medical reasons and other necessary reasons must present a digital license when driving, taking public transportation and taxis. Violators will face fines and vehicle seizures.

Taking action so early to prevent foreign imports, why has Russia still failed to stop the large-scale outbreak?

Sergey Alkhovsky, a virologist at the Ivanovsky Institute of Virology of the Russian Ministry of Health, previously mentioned in an interview with the journal Science that by March, despite community infections, most of the diagnosed patients in Russia came from Europe .

He pointed out that although it was forced to cut off personnel exchanges with China very early, Russia’s restrictions on flights to and from Europe were implemented “too late”. “At that time, Italy and other countries had already experienced outbreaks.”

Russia only began to restrict flights to and from the European Union, Switzerland, and Norway on March 16. And only for restrictions, Moscow flights to European capitals remain unaffected. On March 13th, the World Health Organization has declared that Europe has become the epicenter of the epidemic; by the 16th, Italy has confirmed 20,000 cases, Spain has nearly 8,000 diagnoses, and Germany has nearly 5,000 diagnoses.

Until March 27, Russia announced the suspension of all international flights.

According to the previously announced standards by Russian officials, the detection of suspected patients for the new coronavirus needs to meet a series of strict conditions, including going overseas, having close contact with people going overseas, and suspected symptoms over 65 years of age. Young patients who did not travel overseas and did not have close contact with returning personnel, but young patients with suspected symptoms could not be tested.

Until March 23, all the test samples need to pass the second test of the Russian National Virology and Biotechnology Research Center in Novosibirsk Region, and Novosibirsk is more than 3300 kilometers away from Moscow. The high threshold of detection and complicated procedures also limit the number of confirmed cases.

From the 23rd, Russia began to adjust the testing standards, and the samples no longer need to be confirmed by the Russian National Virology and Biotechnology Research Center. Due to the surge in patients, from last week, doctors no longer need to wait for the virus test results, and can directly treat patients according to the new crown diagnosis according to clinical judgment.

The “Washington Post” report also pointed out that according to the records of the Russian Federal Statistics Office, in January this year, the number of pneumonia patients in Moscow increased by 37% over the same period.

Anastasia Vasilyeva, the head of the Russian Medical Doctors Union and an ally of the opposition leader Navarni, suspects that some of the growing pneumonia patients are actually new crown patients. And because the doctors who treat ordinary pneumonia will not take the strict protection needed to treat patients with new crowns, it may have caused infections inside the hospital. Russia ’s official denial of Vasilyeva ’s claims.

In terms of its ability to respond to the outbreak in the future, WHO representative in Russia Melita Vujnovic believes that Russia is relatively well prepared.

She pointed out that Russia has publicized the prevention and control information in advance, and there are about 70,000 available beds and 40,000 ventilators in the country. In Moscow alone, the authorities have prepared 20,000 beds to receive patients with new crowns.

Vuinovic also emphasized that in the face of the new crown epidemic, “people’s behavior is the key factor in determining the outcome.”