The worst in 40 years! The World Bank predicts a sharp decline in the economy of South Asian countries such as India

Home Health The worst in 40 years! The World Bank predicts a sharp decline in the economy of South Asian countries such as India
Health, Politics
April 13, 2020April 13, 2020By daydayhub
0

Original title: Worst in 40 years! The World Bank anticipates a sharp decline in the economy of South Asian countries such as India. The

World Bank (hereinafter referred to as the “World Bank”) pointed out in the latest issue of the “South Asia Economic Focus” report (hereinafter referred to as the “Report”) that due to the suspension of economic activities, the decline in trade, The pressure on the financial and banking sectors is increasing, and all eight economies in the region are expected to experience a sharp economic downturn.

The World Bank pointed out that in the context of rapid changes and uncertainties in the epidemic, the region’s economic growth rate is expected to decline to 1.8% to 2.8% in 2020, which is a sharp reduction from the 6.3% growth forecast 6 months ago.

The World Bank said that this will be the worst performance in the region in 40 years, and all South Asian countries will experience a temporary contraction. The report also warned that under the circumstances of a long and extensive national closure, the entire region will experience negative growth this year.

The World Bank recommends that, with the death toll caused by the New Coronary Pneumonia epidemic and the increasing negative impact on the global economy, governments in South Asia must increase their efforts to curb health emergencies and protect people, especially the poorest and most vulnerable groups. The economic recovery laid the foundation. 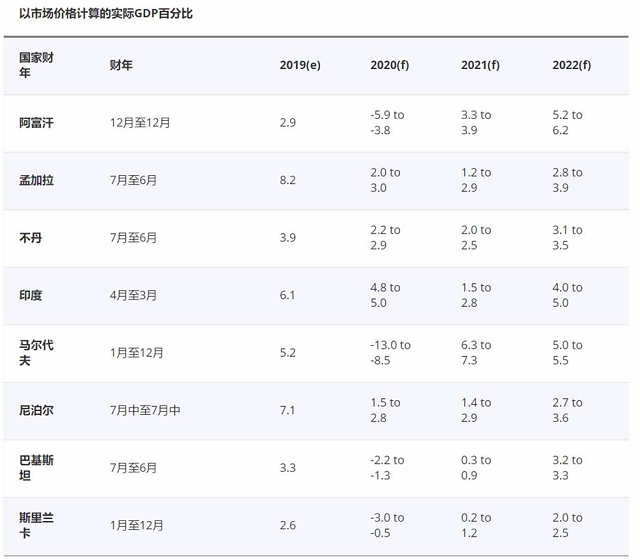 Hartwig Schafer, deputy governor of the World Bank ’s South Asia region, said: “For South Asian governments, the priority is to contain the spread of the virus and protect the people. The New Coronary Pneumonia Crisis is also an emergency mobilization order that requires innovative policies. The end of the crisis will quickly start the South Asian economy. If this is not done, it may affect long-term growth and lose the hard-won poverty reduction results. “The

World Bank pointed out in the report that the new coronary pneumonia epidemic will hit low-income people, especially They are informal workers in the service industry, retail industry and transportation industry. They have limited or no access to medical services or social security.

The report also emphasized that the impact of the new coronary pneumonia epidemic may increase inequality in South Asia.

“A scene that is constantly being staged throughout South Asia is that the sudden and massive loss of low-paying jobs has driven a large number of migrant workers from cities to rural areas, leading to a sharp increase in concerns about the return of many of them to poverty.” The report pointed out that although there are no signs that a large scale has occurred Food shortages, but the protracted new outbreak of pneumonia may threaten food security, especially for the most vulnerable groups.

In the short term, the World Bank recommends that weak medical and health systems be prepared to deal with the greater impact of the new coronary pneumonia epidemic, and provide a social safety net for the most vulnerable groups to ensure the supply of food, medical supplies and necessities. In order to minimize short-term economic pain, the report calls for the development of temporary work plans for unemployed migrant workers, debt relief measures for businesses and individuals, and simplified customs clearance procedures between regions to speed up the import and export of necessary materials.

After the closure restrictions are relaxed, governments in South Asia should combine expansionary fiscal policies with monetary stimulus to maintain credit flow.

The World Bank pointed out that given the limited fiscal space in many South Asian countries, these policies should target the people most affected by the stagnation of economic activity.

Hans Timo, the World Bank ’s chief economist for South Asia, said: “After addressing the direct threat of the new coronary pneumonia epidemic, countries in South Asia must maintain prudent fiscal policies and debt reduction initiatives to maintain the sustainability of their sovereign debt and surpass The current crisis has seized the huge opportunity of expanding the use of digital technology for payment systems and distance education to reach remote areas in South Asia. “On the

2nd, the World Bank Executive Board approved the first batch of emergency assistance projects for developing countries, using the new crown The special fund for pneumonia epidemic fast track, the total amount of the first batch of projects is 1.9 billion US dollars.