Original title: The United States still has a sensible

British “Nature” magazine apologized to China for three consecutive days, saying that it was wrong to associate the new crown virus with Wuhan and China.

At the same time, Bill Gates, the co-chairman of the US Gates Foundation, was interviewed by CCTV’s “News 1 + 1” on April 9 and once again praised the achievements of China’s national defense and epidemic prevention. Uncle Hai noticed that Gates praised China many times in recent stages.

Judging from these two aspects, China’s contribution to the world’s anti-epidemics is really not something that Western arrogance and prejudice can obliterate. And, with the development of the epidemic in many places, it will be more clearly revealed-China’s original anti-epidemic approach was correct.

The apology of “Nature” magazine occurred on April 7, 8, 9 on the website, Twitter and WeChat public account. In the form of a social review, the journal stated that “the original approach was indeed wrong, and we are willing to take responsibility and apologize for this.” Uncle Hai felt that, in terms of form, such an apology is sincere. If you smell it, you will change it. 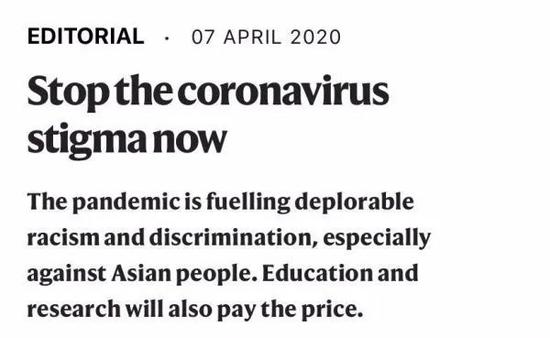 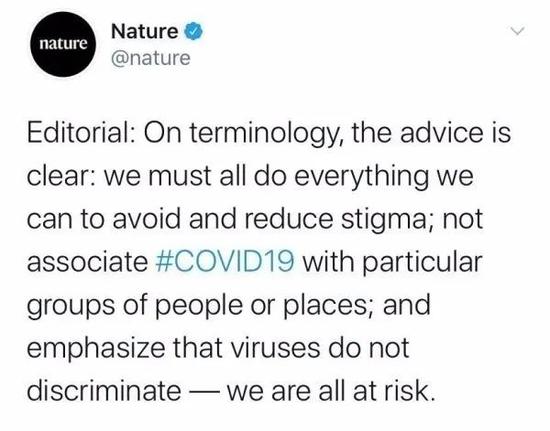 is not only an apology posted on the Chinese interface, but also an apology posted on the official website and Twitter, the intention is obvious- — This apology is not just sent to the Chinese people, it should be seen by the whole world. As for the apology issued on the WeChat platform, it is in Chinese, with the word Xiao Chang-“Our original approach was indeed wrong, and we are willing to take responsibility and apologize for this.” 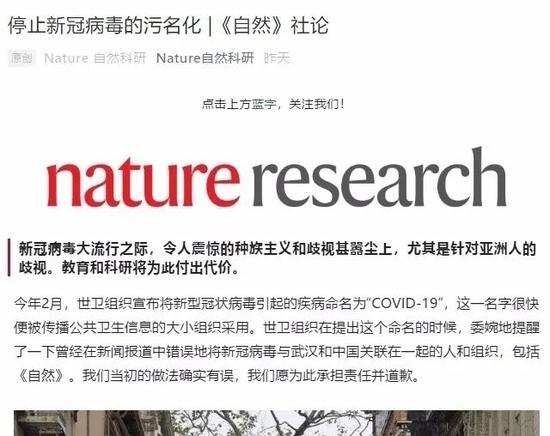 So, is such an apology useful? Uncle Hai believes that of course it works.

“Nature” is the world’s top academic journal. When the New Coronary Pneumonia outbreak began in Wuhan, WHO did not announce the name of the new coronavirus. At this time, the article published in “Nature” used some titles to associate the new coronavirus with Wuhan and China. Is such an approach appropriate? Obviously inappropriate.

Even though there was no official name for the new coronavirus at that time, WHO provided naming guidelines as early as 2015 to stop the stigmatization. But until the WHO has a clear name for the new corona virus-COVID-19, according to the apology article of “Nature”, “This name will soon be adopted by large and small organizations that spread public health information.” At this time, “Nature” magazine can uphold the scientific attitude and apologize for its own mistakes, in fact, it has not lost or reduced the value of its publications. 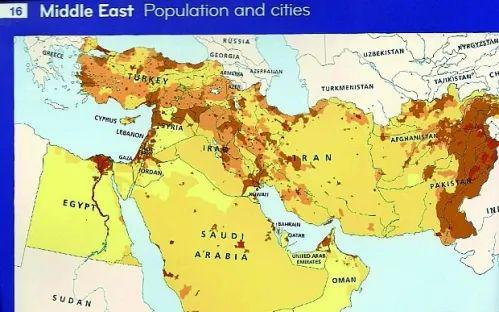 In the atlas of Harper Collins Press in the United States, Israel disappeared out of thin air

in two languages, and issued an apology on various platforms, making Uncle Hai think of the recent pre-sale of a diary of the American Harper Collins Press. In 2014, this publisher was the first to erase Israel from the map in the atlas issued by the Middle East. However, there is no such “oversight” on the maps issued by the United States. Obviously, this is not an “oversight”, it’s just to please both ends. In the Middle East, Harper Collins Press claims to respect the preferences of locals and “Gulf customers cannot accept the existence of Israel.” In the United States, it dare not ignore Israel’s existence. Really made two good deals!

Watch Bill Gates praise China again. In an interview with CCTV on April 9, Gates said that China is the first country to start fighting the epidemic. The first countries to experience the epidemic often face the greatest challenges because people know too little about the disease. Now China is helping other countries. China has basically resumed work and is currently participating in the supply of some key materials, which will bring about major changes in the global anti-epidemic.

Bill Gates even said: “Under strict isolation, all Wuhan people have made huge sacrifices and life has become very different from the past. Being at the center of infectious diseases is an incredible challenge. Thank you for your sacrifice. ” . 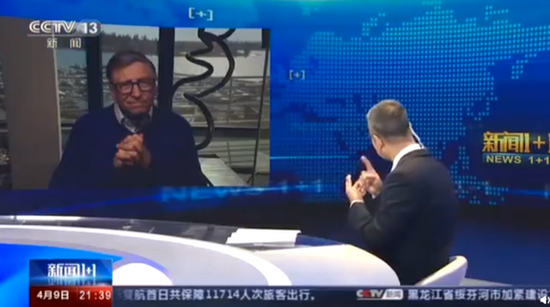 On March 18, Gates answered the questions of American netizens on social media Reddit, the topic is about the prevention and treatment of the new crown virus. He believes that the United States should learn from China and South Korea in the prevention and control of epidemics. At the time, Gates even stated that the situation in Wuhan was severe in January, but the Chinese were quite open to the case and gradually controlled the epidemic. In answering questions, he particularly emphasized that the new crown virus should not be called “Chinese virus”. 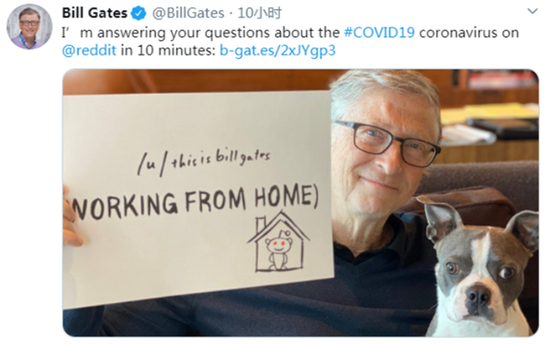 Bill Gates called on Twitter to stop working on home

From the repeated apology of “Nature” to the repeated praise of Bill Gates, it can be seen that even in the West, there are still people who know where justice is. Uncle Hai believes that no matter where the new coronavirus originated, or the unsatisfactory aspects of the current anti-epidemic in some western countries, many problems remain to be solved!

On April 10, Zeng Guang, a member of the high-level expert group of the National Health and Health Commission, said: “We think about it. If we took measures that were synchronized with China at that time, then they should be under control before us. Because they had fewer cases, then Everyone is at the same level. If there is no control, only two problems can be explained. One problem is that there may be other sources besides Wuhan. We have not found that there may be abroad. The other problem may be Because their epidemic prevention measures are not in place. ” 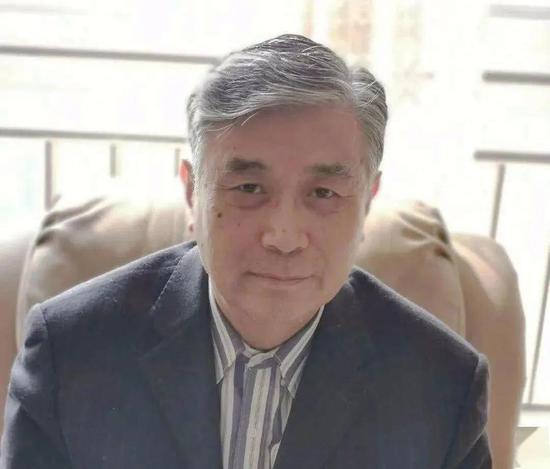 in the eyes of Uncle Hai-

1. Stigmatizing others does not do you any good. Especially in the case where the New Crown Virus originates from the two! Zeng Guang’s statement is at least a reminder to some people in the West! On April 8, researchers from the University of Cambridge and Germany published a paper in the Proceedings of the American Academy of Sciences (PNAS), saying that earlier versions of the new coronavirus are more common in the United States and rare in Wuhan. The lead author of the paper, Dr. Peter Forster, a geneticist at Cambridge University, said that by analyzing the first batch of 160 complete viral genome sequences found in patients, the closest to the bats was found. The variation is mainly in patients from the United States and Australia, not in Wuhan, China. 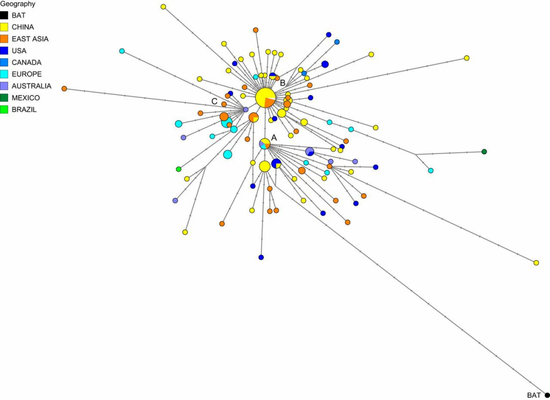 research team used sample data collected from around the world from December 24, 2019 to March 4, 2020 . The data shows that there are three distinct but closely related variants of the new coronavirus called A, B and C. Although some authoritative professors in the international biological community claim that this scientific research conclusion is still not related to the source of the virus, whether the new coronavirus originated in Wuhan is indeed a mystery! And, Uncle Hai believes that the answer will be revealed to the world! 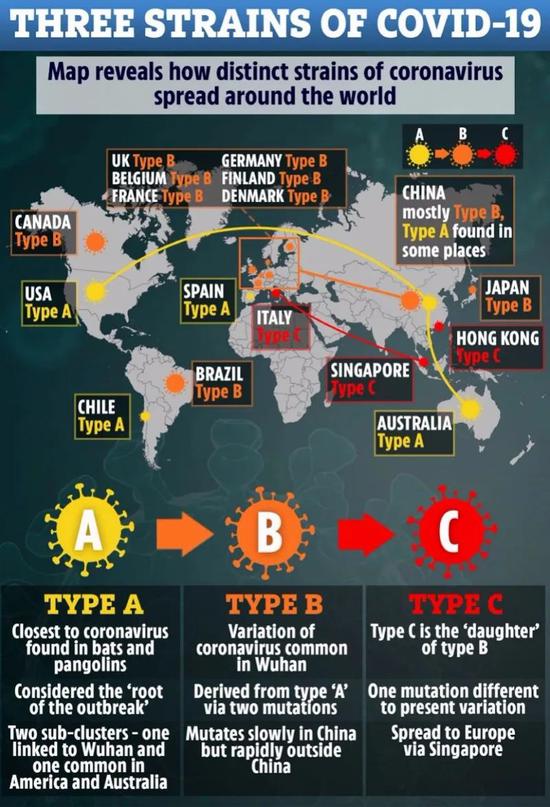 . China can control the epidemic in a relatively short period of time, and its experience is worth studying and learning. Bill Gates did not shy away from this, and some authorities in Europe and America should not shy away from this. Let’s see what Zeng Guang said-after SARS in 2003 and A1 in 2009, China has carefully summarized every battle and has accumulated a lot of effective experience in the prevention and control of infectious diseases. It is the first battle. The repeated apology of Nature magazine and the repeated praise of Bill Gates are, in the final analysis, some people in the West have realized that the source of the new coronavirus is still a mystery. Stigmatizing others is not good, and China ’s anti-epidemic measures are very powerful. !