Home Health Trump again tried his best to recommend anti-epidemic drugs and was questioned by the media
Health, Politics
April 11, 2020April 11, 2020By daydayhub
0

Original title: Trump once again tried hard to recommend anti-epidemic drugs. The media questioned the medical emergency. In the

face of an increasingly severe epidemic, US President Trump again recommended the anti-malarial drug hydroxychloroquine at a press conference on the 7th. Trump said there was no loss if it failed. The National Institutes of Health (NIH) announced on the 9th that it will start a clinical trial of hydroxychloroquine in patients with new coronary pneumonia.

Trump has repeatedly recommended the use of the drug

Previously, Trump repeatedly recommended the use of the drug.

On March 21, Trump posted on social media that the combination of hydroxychloroquine and azithromycin may change “the rules of the game in the history of medicine.”

At the White House press conference on April 4, Trump again recommended the use of the anti-malarial drug hydroxychloroquine for patients with new coronary pneumonia.

According to the “New York Times” report, Trump recommended the treatment plan mainly because he saw an article published by the French scientist in the International Journal of Antibacterial Agents on March 20. The article said that in a trial involving 36 people, hydroxychloroquine and azithromycin work synergistically, which can shorten the time to expel the virus and help treat new coronary pneumonia.

However, forced by clinicians to question, this paper has been deleted recently.

Chinese and foreign experts have doubts about the clinical use of hydroxychloroquine.

According to the US media “Capitol Hill”, hydroxychloroquine is a drug used to treat rheumatoid diseases such as malaria, lupus and arthritis, which can reduce fever and reduce inflammation. The use of this medicine is not without risks. Even short-term use can cause patients to have symptoms such as arrhythmia, epilepsy, skin allergies and hypoglycemia.

Dr. Foch, a senior expert in infectious diseases in the United States, has repeatedly warned that it is too early to promote hydroxychloroquine before the results of more rigorous tests. When asked whether he should consider using the drug to treat patients with new coronary pneumonia, his answer was no.

Dr. Megan Lenny, an emergency physician at Brown University in Rhode Island, said the drug may be effective for some patients, but there is not enough scientific evidence to support Trump’s claim. She said: “Hydroxychloroquine has side effects. It can cause mental problems, heart problems and other adverse reactions.”

Experts in our country have also repeatedly reminded that it should be used with caution, and it is not recommended that individuals hoard the drug.

Academician Zhong Nanshan has pointed out earlier that in theory, hydroxychloroquine combined with azithromycin can be used to treat new coronary pneumonia, but these two drugs will cause impairment of cardiac conduction function and are not suitable for large-scale promotion. Use needs to be very cautious, not only to consider the effectiveness, but also pay attention to safety.

Suffering from illness? Media: Trump is taking a risk The

British “Financial Times” commented on this, saying that Trump’s attachment to the unproven new crown therapy is taking risks. The article pointed out that Trump’s approach will only cause the US government to ignore the focus on more feasible anti-epidemic methods. And those who really need hydroxychloroquine to treat malaria, lupus and rheumatoid arthritis will also lack such drugs. 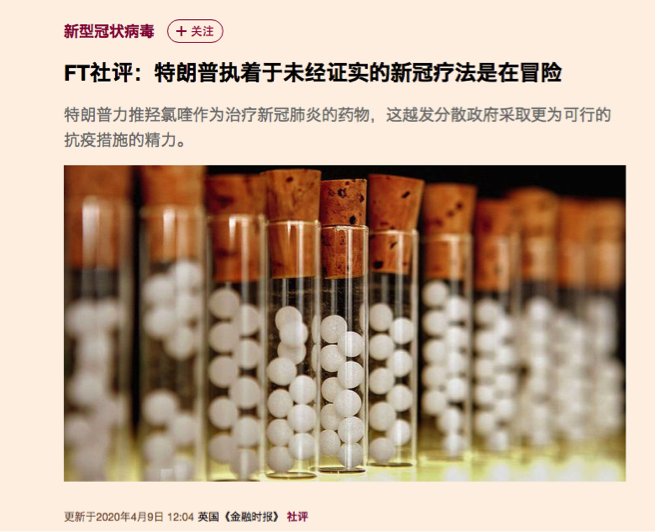 The clinical study of hydroxychloroquine is still in progress, why does President Trump repeatedly tout this drug? Whether there is a commercial connection has caused many US media to question.

According to the New York Times, Trump can get a small amount of economic benefits from a manufacturer of anti-malarial drugs.

Trump’s family trust funds are all invested in a mutual fund, the fund’s largest shareholder is Sanofi (Sanofi), and Sanofi is the producer of hydroxychloroquine.

“Washington Post” reported on April 8 that Trump admired the drug for two reasons: First, Trump heard the wrong statement. And more importantly, he is a bit desperate. He wants to stand out from this matter and become a hero. In his view, this is the only drug that can give him hope.