Was criticized for digressing at the epidemic briefing, Trump angered the Wall Street Journal

Original title: Was approved for “off topic” at the epidemic briefing, Trump angered the “Wall Street Journal”: “fake news” media!

[Global Network Report] US President Trump has worked with the media again, this time in the Wall Street Journal. On the 9th local time, Trump tweeted that the Wall Street Journal was “fake news” media. Because the media in a comment on the 8th criticized Trump’s “off topic” behavior at the White House New Crown Epidemic Press Conference and people who criticized himself, and also suggested that Trump put the “C” position of the conference. Let others. 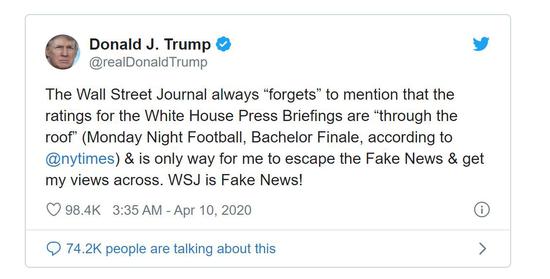 Trump wrote on Twitter on the 9th: “The Wall Street Journal always ‘forgets’ mentions of the soaring ratings of the White House press conference (according to” New York ” The Times, (comparable ratings of the conference), “Monday Rugby Night” and “Bachelor”), (the conference) is the only way for me to escape fake news and make my point clear. The Wall Street Journal is a fake news media ” 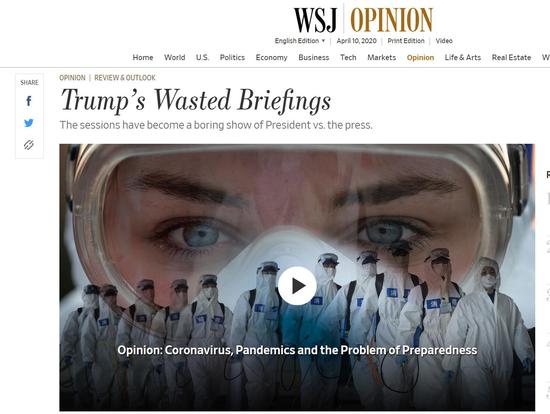 article said that in the press conference, Trump frequently attacked the media, the governor, and those who criticized himself were ” Off topic, because this epidemic has caused tens of thousands of deaths in the United States.

The editorial board of The Wall Street Journal also urged Trump to give the center of the conference to Vice President Pence and senior health officials, because although they often appear at press conferences, they mainly wait until the president has finished his speech. Only provide the latest information on the epidemic situation.

“Capitol Hill” said that Trump’s Twitter rarely appeared in the media tycoon Murdoch’s “Wall Street Journal”, the move highlights its obsession with the role of the epidemic conference in the media. Trump often boasted about the popularity of the conference, and White House officials also complained that the videos were not fully played online.

It is reported that before answering reporters ’questions, Trump usually starts a daily press conference with a prepared statement. This form also led to the contradiction between Trump and reporters at the epidemic briefing, and similar criticisms of the presidential candidate Biden appeared at the meeting.