[Global Network Reporter Zhang Xiaoya] “We have seen some favorable signs, and the (epidemic) curve is flattening.” New US cases of CV infection remain On the rise, CNN’s latest report on the 10th said that Anthony Fudge, director of the National Institute of Allergy and Infectious Diseases, said in an interview with the program that day that he has seen some positive signs that indicate the new US crown The virus (newly infected cases) curve may be flattening. 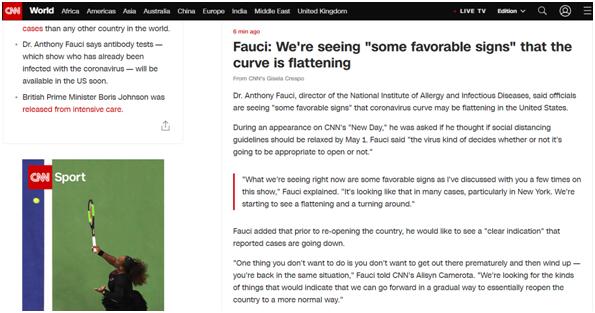 On CNN’s “New Day” program, Fauci was asked if he believed that the US “social alienation” guidelines should be relaxed by May 1, Fauci said, “To some extent In fact, the virus determines whether the relaxation measures are appropriate. ”

” We are now seeing some positive signs, as I have discussed several times in this show, “Fuch explained,” This is true in many places. Especially New York. We are seeing a (curve) trend of flattening and getting better. ”

Foch also added that before the United States reopens, he hopes to see a“ clear sign ”that the reported (new) cases are taking place decline.

“You wouldn’t want to relax the restrictions prematurely, and then-back to the same situation,” Foch told CNN: “We are looking for signs that we can move forward gradually, basically letting the US Reopen in a more normal way. ”

new coronary pneumonia, News, Outbreak, United States
Previous PostIndia is about to enter the stage of containment of large-scale outbreaks but something frighteningNext PostForeign media: Chairman of the ad hoc arbitration tribunal in the South China Sea arbitration case died due to illness