Trump, criticized by Tan Desai, continued to speak hard, calling the WHO “toward China”

[Global Network Reporter Liu Yang] After Trump criticized the WHO as “centered on China” and threatened to suspend the payment of dues, the WHO The organization’s director general Tan Tsai did not call on Trump on the 8th, calling for “stop politicizing the new crown virus.” But his words did not seem to be heard by Trump. The latter continued to attack WHO at the White House New Crown Outbreak briefing on the evening of the 8th, saying it would “make up its mind” on the issue of dues. 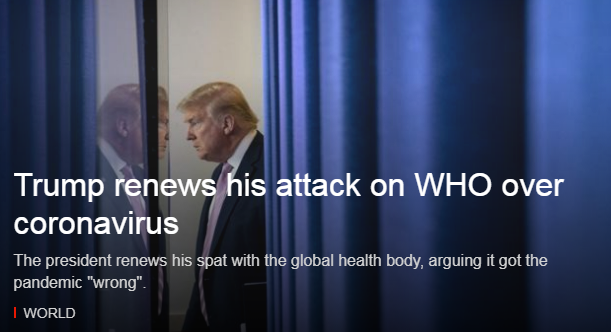 “Please do n’t politicize this virus. It is taking advantage of the differences between different countries. If you want to use it like this, if you want to have more body bags, okay, then you do it like this, “The Director General of the World Health Organization Tan Desai said on the 8th that it was generally regarded as a response to Trump’s previous remarks. He continued, “If you do n’t want to see more body bags, then do n’t politicize it (virus). The message I want to give is very short: please isolate the politicized coronavirus. The unity of a country is to defeat This dangerous virus is crucial. ”

But according to CNN, after Tan Desai expressed his position, Trump’s attack did not stop. He continued his criticism of WHO at the White House epidemic briefing. “When you see their (WHO) relationship with China, I can’t believe he (Tan Desai) is talking about politics. China spent 42 million US dollars (referring to the WHO membership fee), and we spent 450 million For the US dollar, everything seems to be going in the Chinese way. This is wrong, it is unfair to us, “Trump said.

CNN also said that Trump hinted that if the WHO could give a “correct analysis”, the deaths of the new coronavirus would be even smaller. On the 8th, CNN, BBC and other international media were watching the debate between Tandse and Trump. Tan Desai said on the same day that in late January this year, after the first report of a community-transmitted case outside of China, WHO “announced a public health emergency of international concern”, “this is our highest level of alert”.

“We said that we have done everything we can, but we will continue to do our best-night and day-just like we have been doing to save lives. We don’t want to waste time.” Tan Desai said.