Reuters: British experts knew from China that the epidemic was “very, very serious” in January

An in-depth report from Reuters reflecting on the outbreak of the British epidemic showed that scientists who advised the British government as early as mid-to-late January I have realized the seriousness of the new coronavirus epidemic through the situation in China.

However, Reuters believes that these scientists did not express their concerns to the government particularly strongly, urging the government to upgrade the level of prevention, and even because they were worried that they would violate the “political correctness” of the United Kingdom, they did not prepare any large-scale travel restriction strategies …

British experts 1 It has been known since the middle of the month that the epidemic is very serious.

“It is too early to judge whether the early response of the United Kingdom is really appropriate. But if history determines that the response at that time is insufficient, then the criticism that the Prime Minister will face is not so much as neglecting him. The scientific adviser ’s suggestion is worse than his failure to question their assumptions. ”Reuters wrote in an in-depth report reflecting the outbreak of the British epidemic published on the 7th, pushing the responsibility for the outbreak of the British epidemic. To the experts of the British government.

The most mainstream news agency in the UK and even the West wrote this because the media found through interviews and inquiries about meeting minutes that the British government ’s scientific advisory team had realized the new crown through the Chinese epidemic as early as mid-January The severity of the virus, but they did not convey this concern to the government more strongly.

Specifically, Reuters stated that epidemic experts who provided scientific advice to the British government were already tracking the epidemic of the new coronavirus when Wuhan, China, at the time stated that the risk of virus-to-human transmission was low. At that time, according to the situation in China, they believed that the risk of virus outbreak in Britain was “very low”.

However, as the situation in China soon changed dramatically within a week, these experts said that they had actually realized that the epidemic was “very, very serious” since mid-January, and in January believed that the new coronavirus epidemic had ” The potential for global outbreaks. ”

Reuters also specifically mentioned that Chinese scholars began to publish papers in famous journals such as The Lancet in the United Kingdom at that time, and also issued a strong warning. 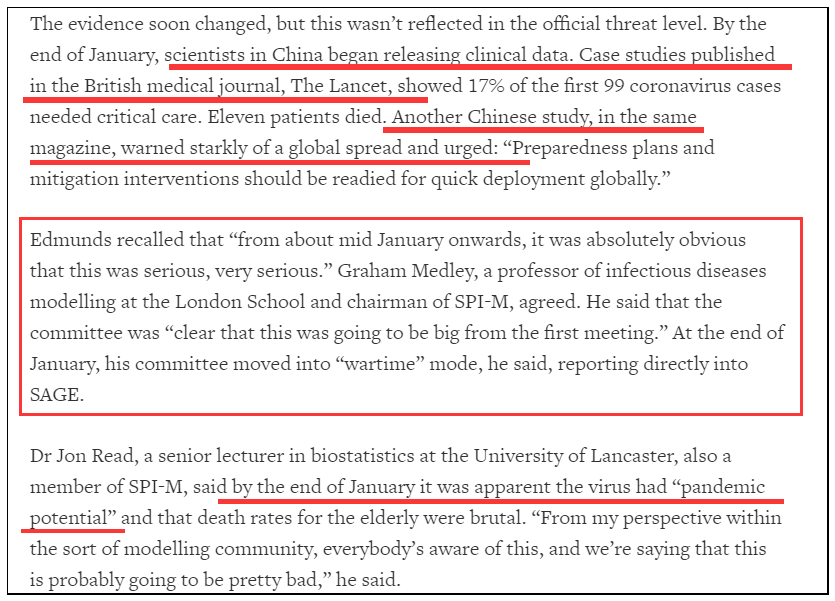 However, Reuters stated that judging from the minutes of the meeting of the committee that provided scientific advice to the British government, the scientists “have not strongly expressed their concerns to the government Express it. ”

The report said that on January 21, these scientific advisers proposed to reduce the risk level of the outbreak to the UK from “very low” to “low”, and then until January 30, 7 days after the city was closed in Wuhan, China, the UK Only then adjusted this level from “low” to “medium”.

But at that time, Britain was still not nervous. Reuters vividly described that on the night of January 31, the British Prime Minister Boris Johnson, who has entered the ICU because of infection with the new crown virus, had made a television speech at the time, but his solemn speech Not about the new coronavirus, but Brexit.

Britain’s relaxed attitude also angered Richard Houghton, editor-in-chief of The Lancet. According to a Reuters report, Richard Houghton said in an interview with the British BBC on February 13 that the British government and public health system wasted preparation of isolation measures and large-scale testing projects, as well as the storage of materials such as ventilators and protective equipment Timing. He also said in a later social commentary on The Lancet that the “urgent warning from the Chinese frontline” is completely inconsistent with the “boring scientific evaluation” received by the British government, and rebuked it as a British The “national scandal”.

The United Kingdom has been rejecting China ’s experience of closing the city.

Secondly, in addition to thinking that the scientists did not sound the alarm to the government in time, Reuters also revealed in the report that although the British government ’s scientific advisory team has early noticed the decision of the city of Wuhan in China They once thought that this kind of behavior would not be accepted by “democratic countries”. Therefore, they did not consider this method when formulating the anti-epidemic plan, but adopted a strategy to deal with the flu.

But this strategy is only to suggest people who are sick to stay at home, and does not contain any restrictive measures.

Even when outbreaks in other European countries have already occurred, especially in Italy, a destination where a large number of British people choose to vacation, outbreaks of severe outbreaks, despite scientific advisers from the British government At that time, it was very clear that the outbreak of the British epidemic was inevitable, especially after the first case of death in the UK, they still rejected the large-scale blockade strategy adopted by Asian countries such as China at a meeting on March 9. 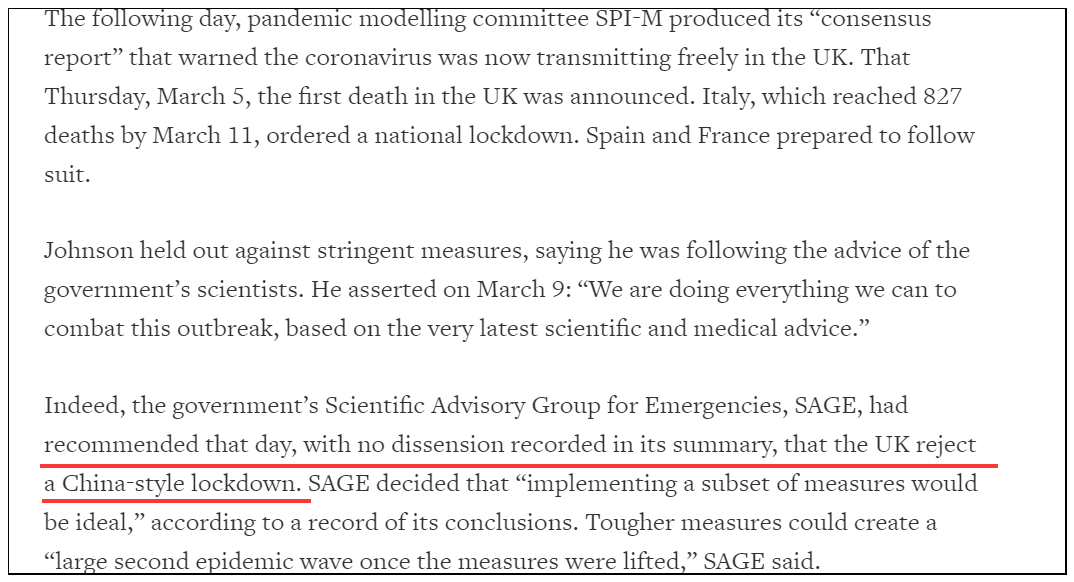 According to a Reuters report, the scientific adviser of the British government believes that it was too late to stop the spread of the virus at that time, so it is better to give up to find out how many people are infected, concentrate on the hospital, and test the patients in the hospital. And rescue, and think that this can delay the outbreak speed. Therefore, the United Kingdom still did not prohibit large-scale gatherings at the time, and football matches were still going on.

But it is embarrassing that although more and more people are infected with the virus, some major British institutions choose to take the initiative to close their doors, even football club players have been infected, and the football league has stopped. The British government still refuses to suspend schools and prohibit public gatherings. According to a Reuters report, this led some British media to question the government on behalf of the public: Is this not enough (serious)? 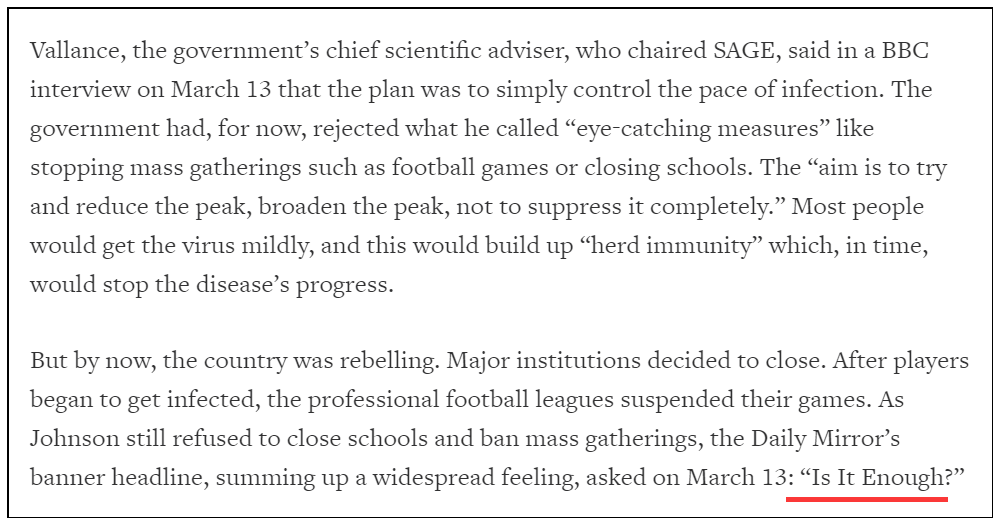 Eventually, according to Reuters report, until the British scientific research institutions discovered through data models that this faint trick of “group immunity” would cause 500,000 deaths, the UK This gave up this strategy on March 16. However, some experts told Reuters that the change in government policy was due to the closure of Italy, which gave Britain a “policy space” for change.

“Despite the initial reservations, no one will now doubt the necessity of the blockade measures for the United Kingdom.” Reuters quoted a British government at the end of the report Scientific experts wrote.

“At this moment we don’t know what will happen in the next 6 months, we only know that if we don’t stop the (virus) transmission, then the medical system will collapse. Yes, this is the only thing we are sure of.”

new coronary pneumonia, News, Outbreak
Previous PostPhilippine Education Minister tested positive for new crown virus and is being quarantinedNext PostUS media: The US is not prepared for a major crisis and more than once