For the first time in New York State, new deaths from new pneumonia have declined. Trump: We are starting to see the light

Home Health For the first time in New York State, new deaths from new pneumonia have declined. Trump: We are starting to see the light
Health, Politics
April 6, 2020April 6, 2020By daydayhub
0

[Global Network reported reporter Zhang Xiaoya] integrated a number of foreign media reports, local “Maybe this is a good sign.” On April 5th, US President Trump expressed optimism at the White House press conference on the new crown pneumonia epidemic regarding the federal government’s response to the new crown virus: “We are beginning to see the light at the end of the tunnel.”

CNN The report said that at the press conference on the evening of the 5th, Trump expressed optimism about the (Federal) government’s response to the new crown epidemic. 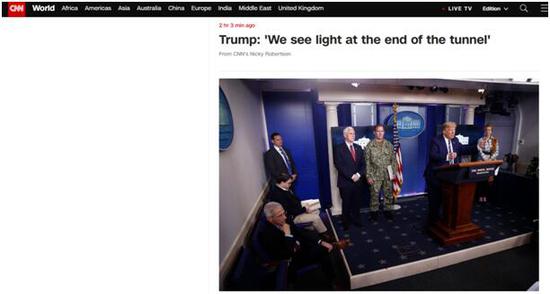 “Maybe this is a good sign,” Trump said on the 5th. “There has never been such a thing before, but we are beginning to see the light at the end of the tunnel.”

In addition, US Vice President Pence also said that the number of cases (curves) in various states of the United States has begun to flatten. “New cases have declined slightly,” Pence said, and all governors who have spoken to him have reported a flat trend. He also emphasized that, as Trump said, “the end of the tunnel is bright”, “we will go through the difficulties faster than we initially thought.”

Johns Hopkins University, the latest According to the data released, as of 9:40 on April 6, Beijing time, there were 337,274 cases of new coronary pneumonia and 9633 deaths in the United States. Among them, there were 2256 deaths in New York City alone.