Welcome to pay attention to the WeChat subscription number of “Chuangshiji”: sinachuangshiji Biance

Silicon-based life is out of reach, but carbon-based circuits have come and are alive.

It turned out that protein can also make the basic unit of a computer. Like a silicon-based circuit, this “protein circuit” can be combined to design a variety of responsible logic circuits.

From then on, we can control the life processes that proteins participate in just like controlling circuit switches.

A research team from the University of Washington used artificial proteins to create molecular logic gates from scratch, implementing dual-input, three-input AND gates, OR gates, NAND gates, NOR gates, XOR gates, and so on.

This research is on the latest issue of Science.

In a silicon circuit, a high level indicates 1, and a low level indicates 0. Ingeniously designed proteins, like a series of 01 signals, achieve a specific function through a set of different combinations.

Their ultimate goal is not to build a protein computer, but to use logic gates to regulate gene expression in human T cells, to make genetically modified T cells live longer, and to improve the safety and durability of cancer cell therapy.

The author of the paper stated that the complexity of the new protein design is close to the real protein aggregate.

“(This research) is a key step in programming complex biological circuits.”

And, according to an article by Chen Zibo, the team has already begun to study whether this method can be used to form multi-level circuits.

controlled by logic gates is controlled

The so-called CIPHR is a polymer of two different proteins, each of which corresponds to an input at a specific location. Different combinations are equivalent to ones in different positions of the circuit.

The logic gates of CIPHR are portable, which also means that we can use logic gates to control different biological functions.

In the experiment, the researchers designed four pairs of heterodimer modules and constructed two logic gates with different control functions. One is used to separate the catalytic activity of luciferase, and the other is used for gene expression in primitive human T cells.

In the system that controls luciferase, they embed a protein on the corresponding nano-site, and test whether the logic gate is opened by in vitro translation and monitoring luminescence.

The logic gate that controls the gene expression of human immune T cells is handed over to the separate TALE-KRAB suppression system.

If a heterodimer is used, as long as it enters (1), it will produce inhibition (0), which is equivalent to a NOT gate.

If a protein monomer is used, as long as any kind of protein enters (1), it will destroy the original TALE-KRAB combination and cancel the inhibition (1), thereby achieving the function of the OR gate. 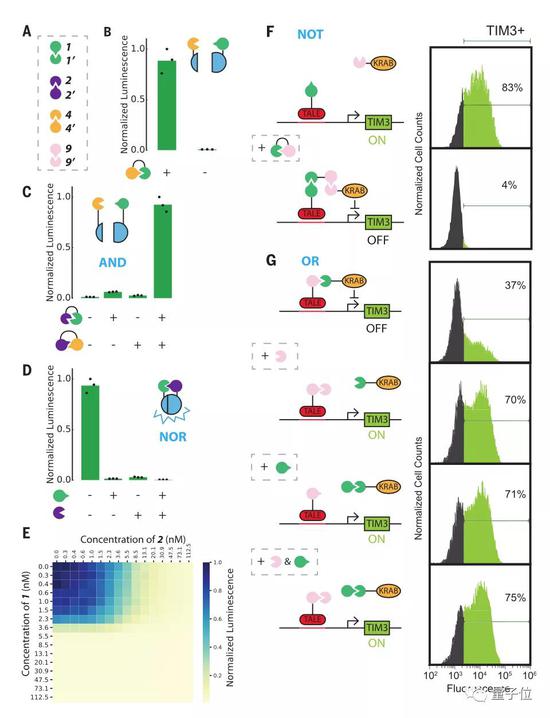 The NOT gate and OR gate are used to control the expression of TIM3 protein in human T cells, which is detected by flow cytometry.

The above is just the case of two inputs, and it is similar if the input is increased to three. But more dimers are used, and more proteins are used inside the logic gate. 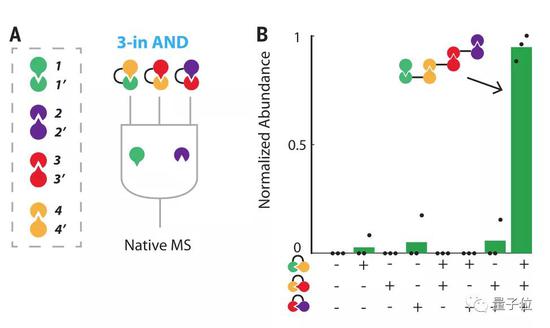 The principle of 3 input OR gate is similar. 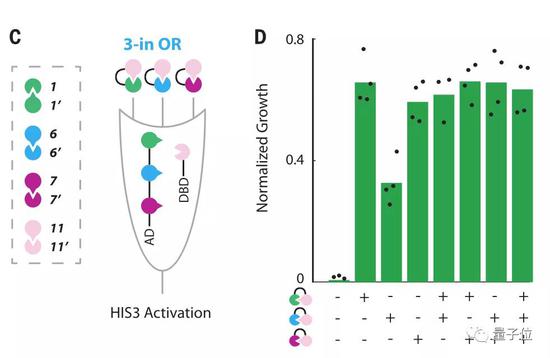 Although logic gates have been designed with proteins, heterodimer modules are completely new technologies that take advantage of de novo protein design.

Specific coding of protein hydrogen bonding networks allows for a wide range of binding affinity between monomers with similar structures, which in turn allows the construction of more complex gates based on competitive binding.

Because the design component of the logic gate is an ultra-stable protein, no additional cell mechanical structure is required. The protein logic gate can work whether inside or outside the cell.

The first author of the article, Chen Zibo, said: “We have proven its function with purified ingredients from cell-free extracts, yeast cells and T cells.”

So, how is this “carbon-based circuit” specifically designed?

In principle, various logic gates can be designed de novo using a group of heterodimeric molecules.

For example, given a heterodimer pair A and A ‘, B and B’, C and C ‘. Through genetic fusion of A ‘and B, and B’ and C, an AND gate can be constructed that regulates the association between A and C ‘. 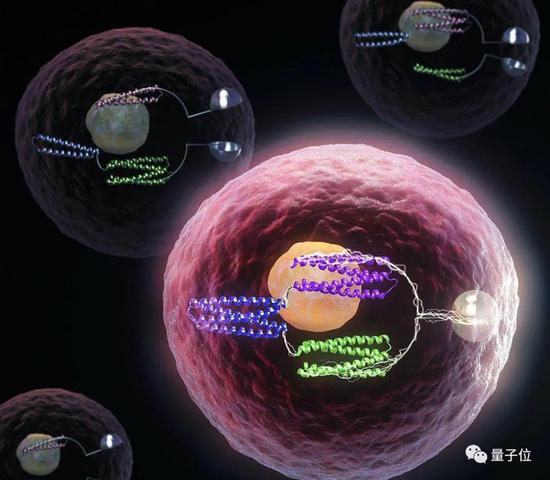 The conditions involved are:

First, there should be many mutually orthogonal heterodimer pairs, so that the complexity of the gate will not be limited by the number of individual elements.

Second, the components should be modular and similar in structure.

Third, a single component should have the ability to combine with multiple different, adjustable-affinity partners so that the input can perform the inverse operation by destroying pre-existing low-affinity interactions.

Fourth, the interaction should be cooperative so that the gate activation is insensitive to stoichiometric imbalances in the input.

Specifically in this study, in order to meet the condition 1, the researchers used a set of heterodimers with hydrogen bond network-mediated specificity and mutually orthogonal design to construct logic gates. 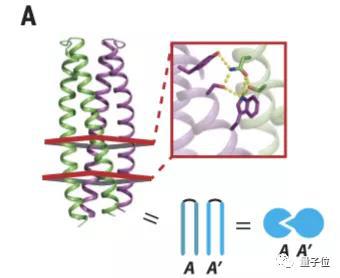 The shared interactive interface limits the amount of crosstalk between heterodimer pairs, so that the binding affinity hierarchy can satisfy Condition 3.

Finally, by constructing monomer fusions (A ‘and B, B’ and C mentioned in the above example), Condition 4 is satisfied.

Hereinafter, a system such as A + A’-B + B ‘is called induced dimerization, A and B’ are called monomers, and A’-B is called a dimer. 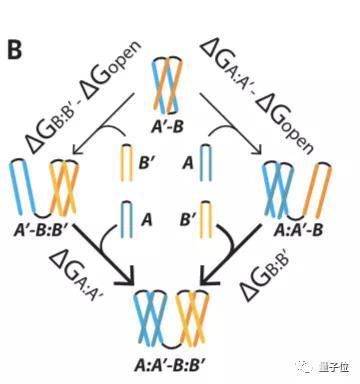 The schematic diagram of the induced dimerization system (6-residue linker) is as follows. 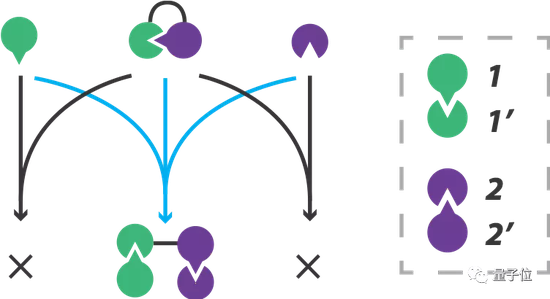 In the experiment, the dimer showed synergistic binding.

So, using nMS, the researchers explored the collaboration of a two-input AND gate composed of two dimers 1′-3 and 3-2 ‘, and monomers 1 and 2 as inputs. 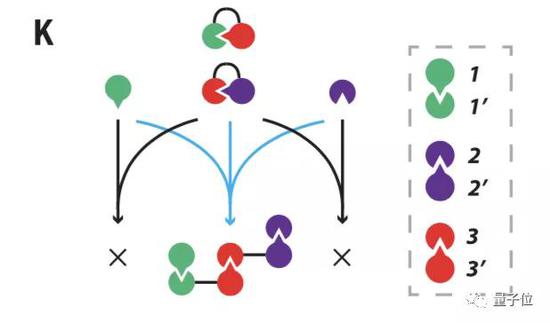 In the experiment, the researchers only observed a very small amount of heterotrimers and heterodimers, further proving that the method has high synergy. 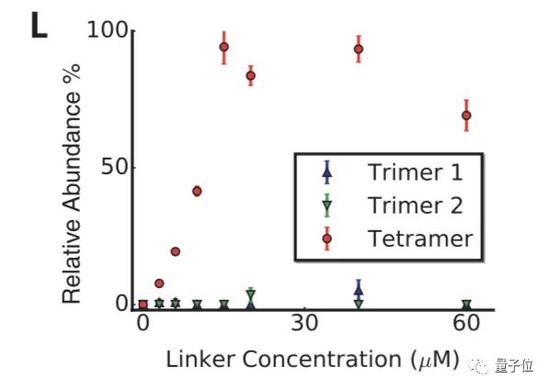 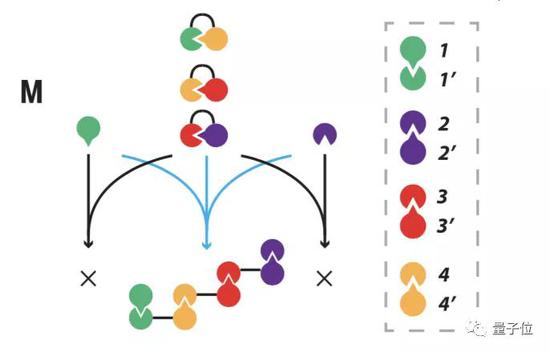 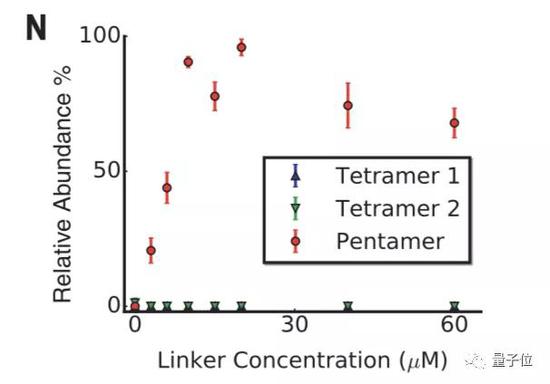 On this basis, the researchers built a variety of 2-input and 3-input CIPHR logic gates.

The specific method is that the monomers of each DHD are connected to the target effector protein through genetic fusion, so that the input (linked heterodimer subunit) controls the colocalization or dissociation of the effector protein. 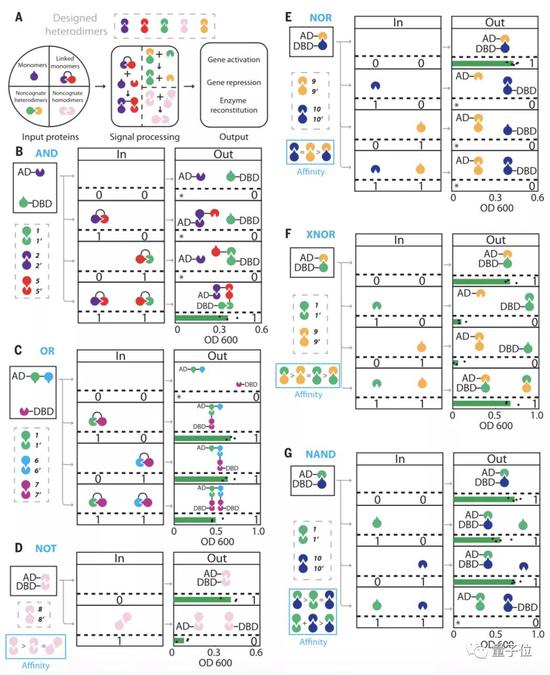 To extend life for immune cells

Now, we can control life at the molecular level in the same way as computers, which is of great significance for future medicine and synthetic biology.

The research team at the University of Washington has begun the next step in the preparation of this technology for the treatment of cancer.

Targeted therapies for CAR-T cell therapy for cancer treatment now have many difficulties, and scientists believe it is related to T cell failure. 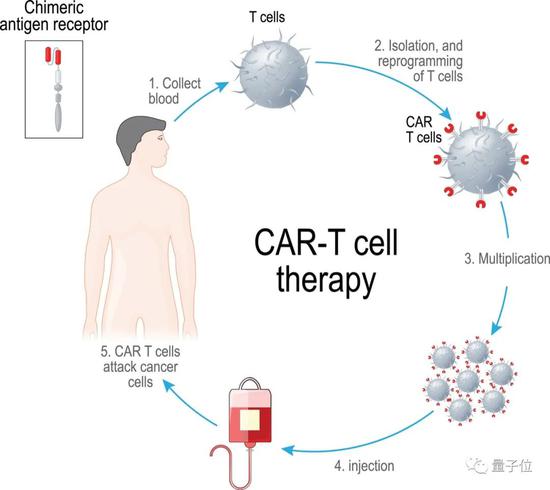 The so-called CAR-T cell is a chimeric antigen receptor T cell, which is a bioengineered protein. Scientists extracted T cells from the human body, genetically modified it to specifically target the antigen on the surface of cancer cells, and then imported it back into the patient.

But transgenic T cells can only survive for a shorter period of time, and the University of Washington team hopes that the use of protein logic gates that attenuate signal responses can prolong the activity of CAR-T cells.

Chen Zibo is 29 years old and is a postdoctoral fellow at the California Institute of Technology’s Elowitz laboratory. His current research direction is to use proteins to build logic circuits from scratch. 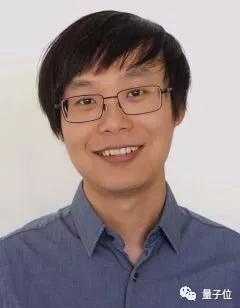 He graduated with a bachelor’s degree in life sciences from the National University of Singapore and received a doctorate degree from the University of Washington in 2019. Last year, he was also selected by the MIT Technology Review as 35 people under 35.

Corresponding author David Baker, professor of biochemistry at the University of Washington School of Medicine and director of the Institute of Protein Design. 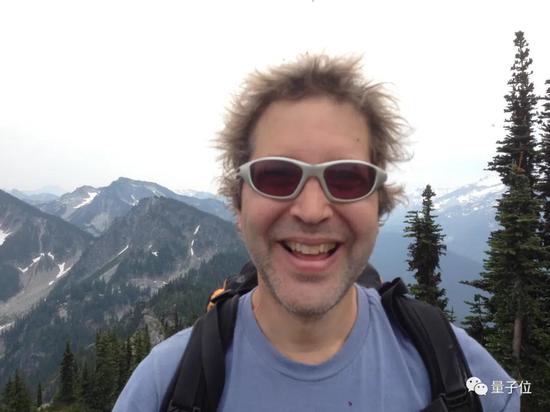 It is worth mentioning that David Baker is also one of the authors of the protein design game Foldit. The protein designed by Foldit has been cited by scientific researchers many times, and is now also used to design against the new crown virus.