Africa’s new crown has more than 7,000 diagnoses, will it be the next Europe

Original title: Africa Epidemic Line | African New Crown diagnosed more than 7,000, will it be the next European

, senior consultant of African Center for Disease Control and Prevention (hereinafter referred to as “African CDC”) on April 2nd, Beijing time The professor was invited by the charity organization “Diinsider Grassroots Changers” to conduct an online live broadcast. The total number of confirmed cases of the African New Crown reported on that day totaled more than 6,000, and on the second day of the live broadcast, the number of confirmed cases increased to 7,123.

Wang Xiaochun served as the director of the Hepatitis C Prevention and Treatment Office of China. From November 2014 to January 2015, as the head of the expert working group of the Chinese Center for Disease Control, he led a team to participate in the prevention and control of Ebola in Sierra Leone. Since October 2018, he has been assigned to the African Union as a senior disease control consultant for the African Center for Disease Control.

Africa Center for Disease Control and Prevention is a young institution established in 2017. In this outbreak, it provides support to 55 member states of the African Union. The City Hall column will organize this live broadcast into articles. Many questions thrown by Professor Wang Xiaochun about Africa in the epidemic situation still need to be answered. For example, after Europe and the United States, will Africa become the next concentrated area for virus outbreaks? Can Africa’s originally weak medical facilities and services respond to this new crown epidemic?

(Editor’s note: As of 5 a.m. EDT on April 3, the African Centers for Disease Control and Prevention announced that the cumulative number of confirmed cases in Africa reached 7,123 and the number of deaths was 289.)

Many countries have been able to report the outbreak at a fixed time every day, such as new confirmed cases and deaths. However, Africa is different and it is difficult to be consistent. Countries have reported cases early and late, and the overall trend is rising.

You can see the change in the number of diagnoses in the past month through the following table. From the discovery of the first case on February 14 to the end of February, the average number of newly diagnosed patients per day was very low. There was an increase until March 10, and the increase began to intensify on March 14. On March 28, the number of confirmed diagnoses reported in a single day reached 680. 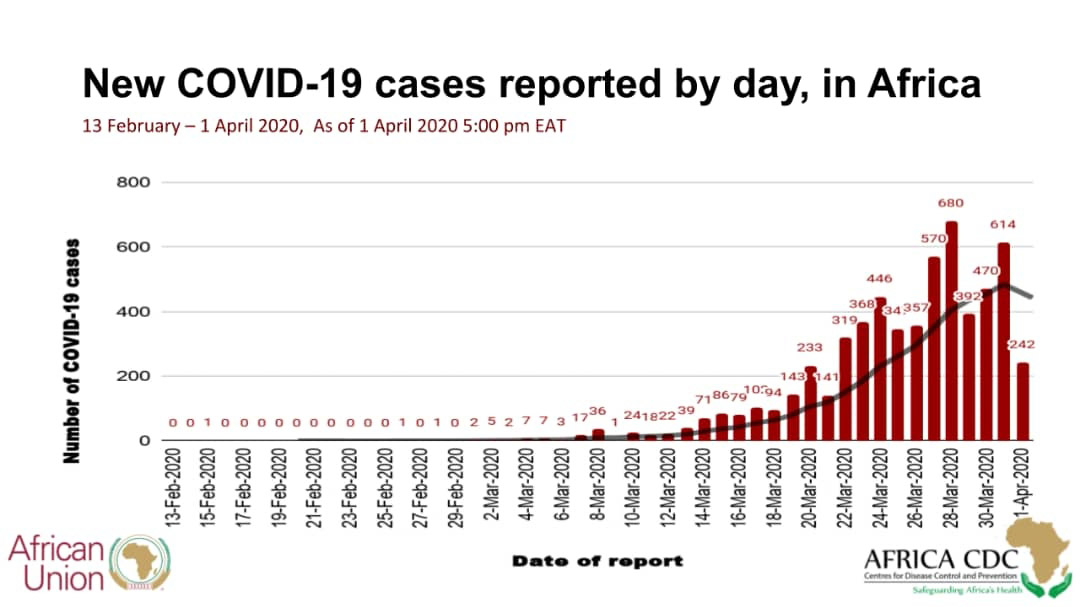 The daily change of newly diagnosed cases of new Africa. The charts in this article are all from the African Center for Disease Control and Prevention.

Comparing the severity of the epidemic situation on all continents, the number of newly diagnosed patients is a major indicator. The current epidemic situation in continental Europe and North America is relatively serious. But everyone also has a question, will Africa become the next Europe?

We made a graph comparing the changes in the outbreak in Africa and Europe 50 days after the first diagnosis. After the first report in Europe, the growth rate intensified by the 30th day. Africa also changed at about the same time, but the increase was relatively small compared to Europe. At present, many scholars are also analyzing different strategies in Africa and Europe, and the situation in different countries. 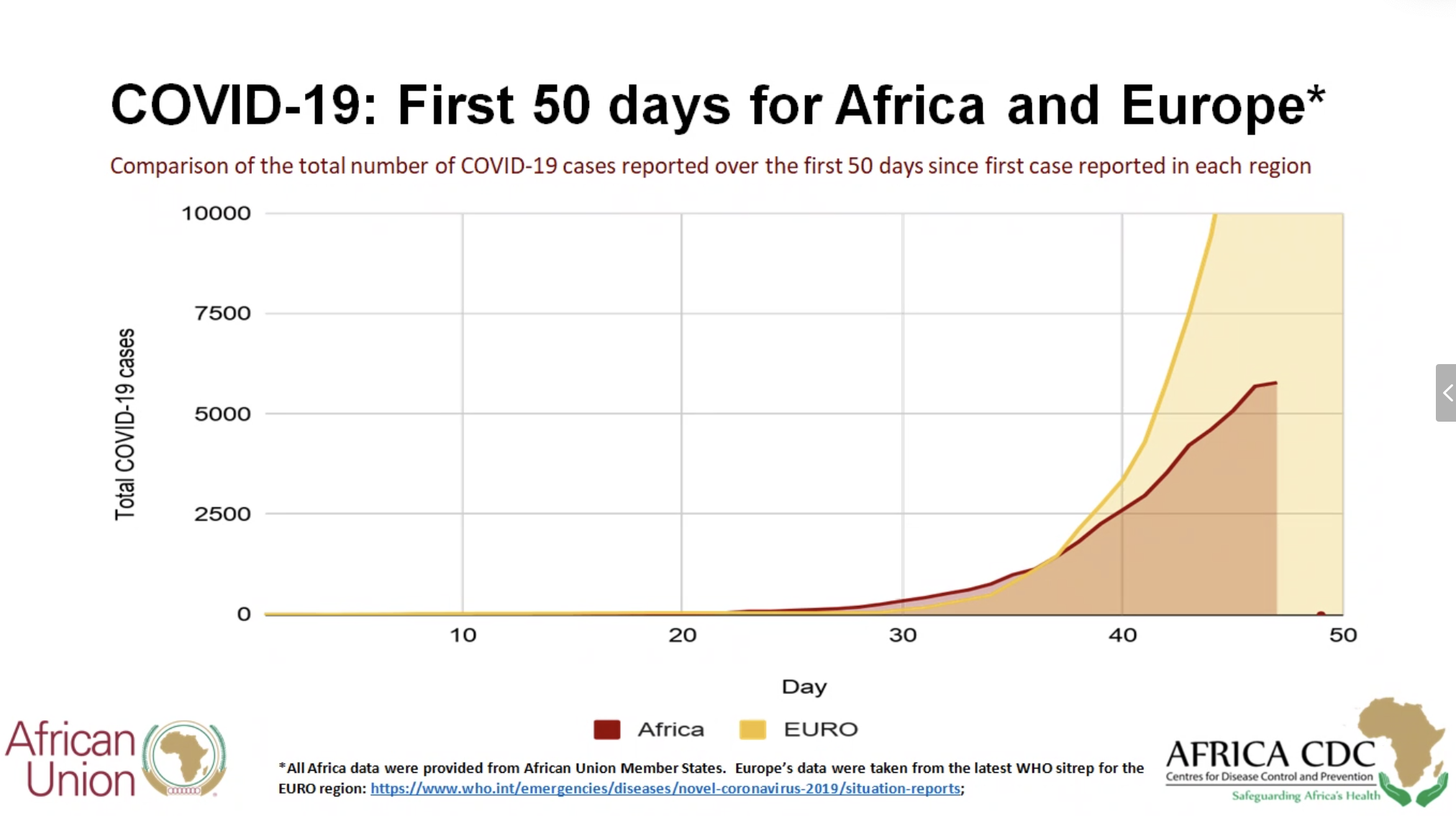 Comparing the outbreaks in Africa and Europe, the number of new cases within 50 days after the first confirmed person changed.

Closing borders is effective for controlling the spread of imported cases. The earliest cases in African countries were imported cases. If the new corona virus has become local or community spread, such as the current United States, Italy, Spain and other countries, simply controlling external input is no longer effective.

At present, South Africa, which has the worst epidemic situation, is also taking various measures, including the management of the source of infection and cutting off the transmission route. These measures will take time to take effect. Early detection, early reporting, early isolation, early treatment. 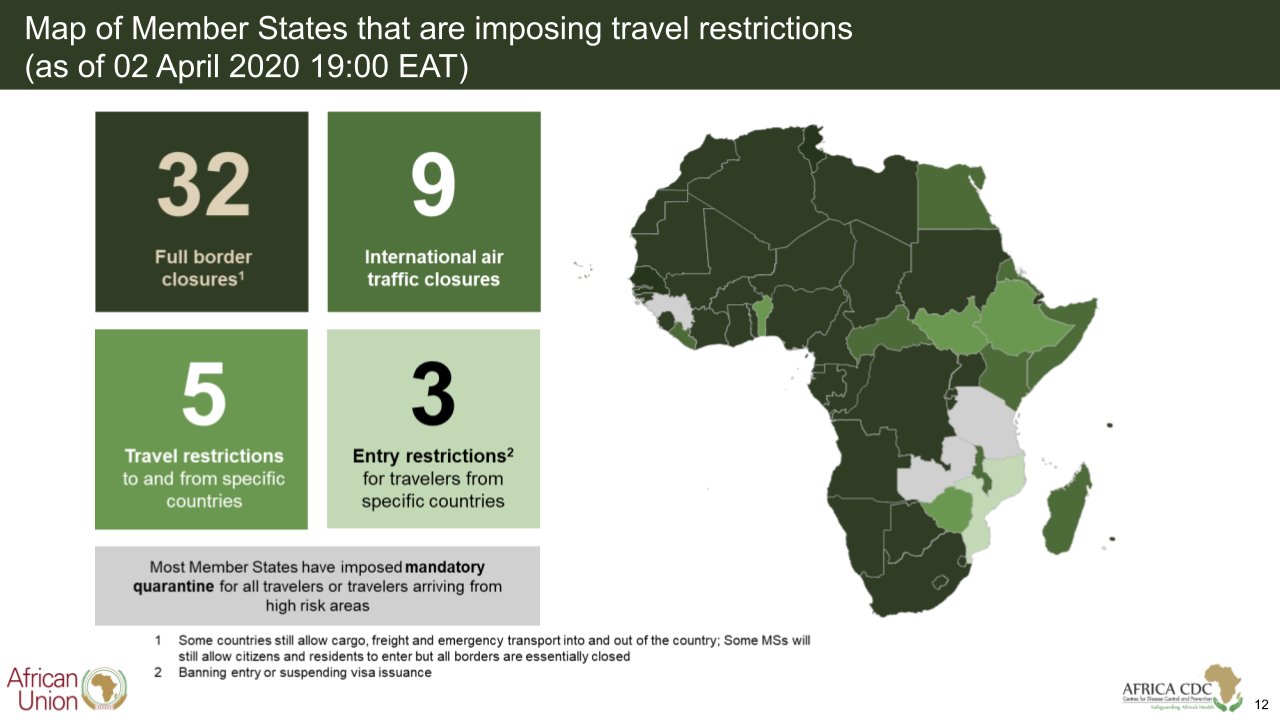 The African Center for Disease Control is a new institution. In fact, from a global perspective, the “Disease Control Center” is only gradually known after epidemics such as SARS. The African Center for Disease Control and Prevention was officially established on January 31, 2017. It is headed by the African Union and is headquartered in Addis Ababa, the capital of Ethiopia. It established specific responsibilities at the beginning of its establishment and is committed to supporting African countries to carry out effective work in areas such as public health monitoring, emergency response, and capacity building in response to huge health challenges.

In February, the African Centers for Disease Control and Prevention had formulated a strategic plan for Africa to respond to the new coronavirus pandemic at the request of the African Union. In the strategic plan, the African CDC needs to work hard to coordinate African member states, AU agencies, the World Health Organization and other partners to ensure resource integration and reduce duplication. At the same time, evidence-based public health strategies are needed to carry out surveillance, prevention, diagnosis, treatment and control of new coronavirus.

To this end, two temporary organizations have been established within the African Center for Disease Control and Prevention. The first is the African Working Group on Response to New Coronaviruses. Its work includes six aspects: virus surveillance, infection prevention and control, clinical management, laboratory diagnosis, and risk communication , As well as supply chain and medical supplies procurement. The other is the African CDC Emergency Management System, which is responsible for contacting 55 AU member states.

The African Centers for Disease Control and Prevention has been strengthening and continuing to support member countries in conducting testing, including the provision of testing reagents. At present, 48 African countries have been supported by the new coronavirus detection reagents provided by the African Center for Disease Control, 25,000 copies of the detection reagents have been distributed, and another 63,000 copies will be distributed to some African countries in the past two weeks.

But as the number of confirmed cases increases, each close contact person of the confirmed person also needs to be monitored, and the test kit still needs to be supplemented. In addition to the kit itself, other testing aids are needed, such as sampling swabs and transporting culture medium. At present, some African countries already have a certain number of testing reagents, but due to the lack of these auxiliary products, the testing work has been affected and the progress has been slow.

In terms of epidemic surveillance, the African Centers for Disease Control and Prevention mainly carried out some training work, one aimed at entry channels, and the other was incident-based surveillance. To strengthen aviation’s ability to respond to the new coronavirus, 40% of airlines across Africa have received training.

In terms of clinical treatment, the African Center for Disease Control has opened online courses, and 299 clinicians from 22 countries have received online training.

At present, the African epidemic is still facing many challenges. For example, more and more African countries have already experienced community infection, and the community has a trend of potential new coronavirus pandemic.

In addition, the number of confirmed cases and the affected countries are still increasing. Many African countries are not yet ready to respond to outbreaks, such as the storage of medical supplies, including masks, PPE (personal protective equipment), and ventilators.