How did the virus land on the US aircraft carrier?

Original title: How did the virus get on the US aircraft carrier?

Judging from the activity trajectory above Roosevelt, the most likely point in time for sailors to be infected with the new crown virus was during the carrier’s visit to Vietnam.

On March 26, 25 sailors on the USS Roosevelt’s carrier had been diagnosed with new crown pneumonia, and this was only three days after the carrier first reported three confirmed cases on the 24th. The doubling of the number of confirmed diagnoses means that the virus has spread in the crowded aircraft carrier space. In the latest CNN report, U.S. Navy officials also acknowledged that more people are expected to test positive on the Roosevelt. It may be There will be “tens of” cases.

Another official said that the US Department of Defense was reluctant to announce the number of Roosevelt carriers infected in the Navy as a result of fears that Chinese or North Korean opponents would consider the Roosevelt carrier to be vulnerable. Happening. US Secretary of Defense Esper said in an exclusive interview with Reuters on the 26th that the total number of confirmed diagnoses in the military will still be announced daily in the future, but in order to “avoid leaks”, detailed information on the number of US troops infected will not be released.

The USS Roosevelt aircraft carrier is the latest US aircraft carrier deployed to the Indo-Pacific region. The carrier left San Diego’s home port in January this year to go to Indo Pacific for deployment and arrived in Guam in mid-February. So the question is, how did this US aircraft carrier that has been sailing at sea get infected with the new crown virus?

Tracking the activities of the aircraft carrier Roosevelt after arriving in the Indo-Pacific region, it can be found that the aircraft carrier visited Da Nang, Vietnam on March 5 for a visit. In a March 24 report from the United States Naval Research Association website (USNI), U.S. Naval Operations Secretary Admiral Mike Gildy said that when Roosevelt visited Vietnam, 16 confirmed cases of new crown pneumonia had occurred in the country. However, at that time, the US Navy considered that the number of confirmed cases was relatively small, and that all cases occurred in northern Vietnam and were all isolated. The carrier’s visit to the port should not be a problem, and the decision was made to proceed as usual. 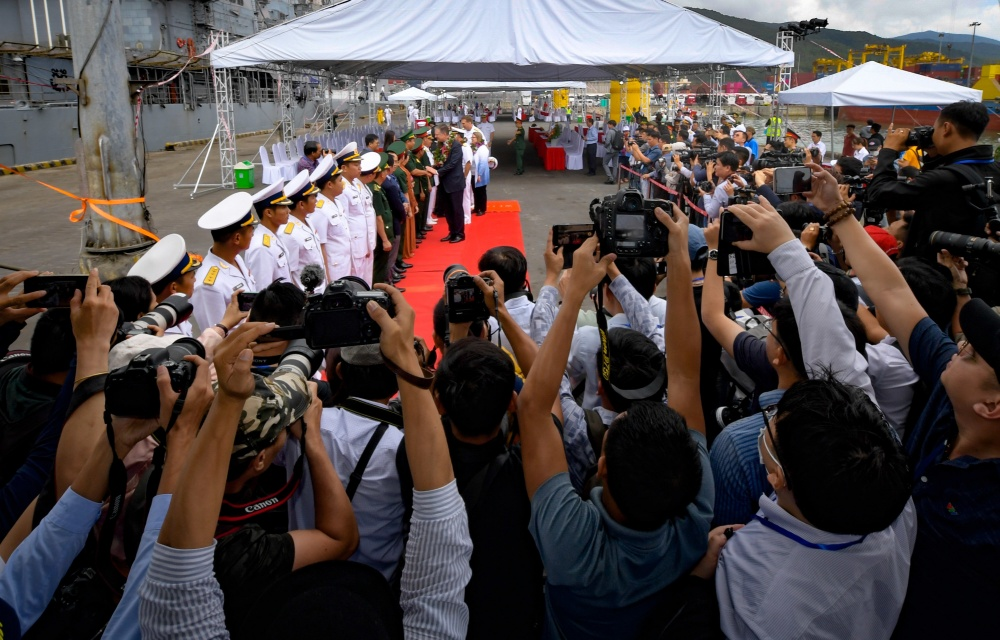 However, it is worth noting that the USS Roosevelt arrived at Danang, Vietnam at the same time as the Bunker Hill guided missile cruiser. The Bunker Hill guided missile cruiser docked at the Da Nang terminal, while the Roosevelt only anchored at the anchorage and did not call at Vietnam. Fang dispatched a barge to transport personnel between the dock and the aircraft carrier. During the visit to Vietnam, U.S. Navy officers and soldiers conducted a number of exchange activities with Vietnam, including attending a welcoming ceremony at the Vietnamese pier, visiting local communities and charity centers in Da Nang, and inviting local Vietnamese media and Vietnamese officers and soldiers to visit aircraft carriers Exchanges, etc. According to the official photos of the US Pacific Fleet, during various exchange activities, US warships did not take any epidemic prevention measures, and neither the US nor Vietnam wore masks. 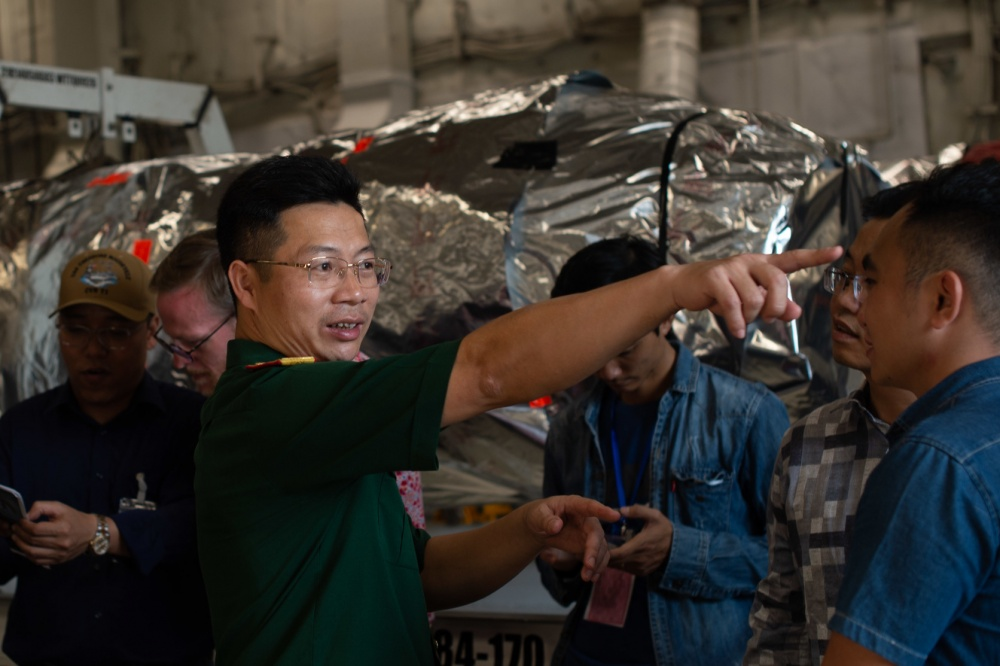 After completing a visit to Vietnam on March 10, the USS Roosevelt moved in the direction of the South China Sea and conducted joint exercises in the South China Sea on March 15 with a number of ships such as the American amphibious assault ship and the Green Bay amphibious dock landing ship. . After the exercise, the Roosevelt sailed out of the South China Sea and arrived in the Philippine Sea. On March 17, a horizontal resupply was carried out. On March 18, it joined the B-52H bomber from the 69th Expeditionary Bomber Squadron of the US Air Force and the F-15C of the US Air Force. The fighters conducted joint exercises. 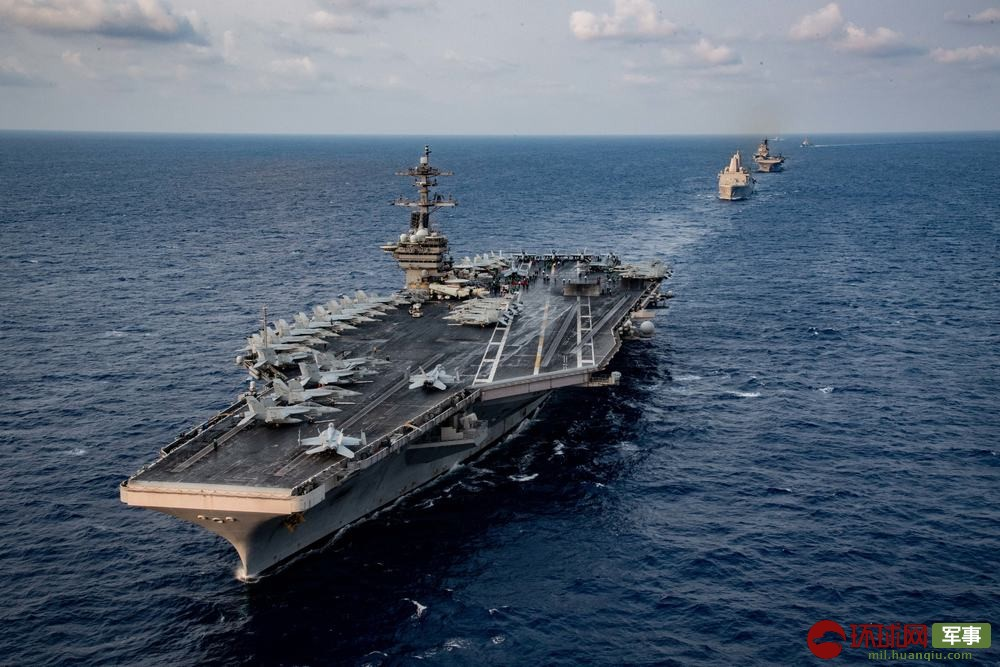 until March 19. With the rapid development of the epidemic in various parts of the world, the U.S. Navy is also aware of the serious consequences of this virus on the carrier. In response to the possible outbreak on the ship, the US Navy ’s front-line medical protection force and the Naval Medical Research Center ’s Members also boarded the USS Roosevelt on this day and brought a variety of professional testing equipment to the ship. These equipment, including the FilmArray tester and ABI one-stop RT-PCR tester, can be used for the rapid detection of new coronaviruses. This means that once a sailor on an aircraft carrier becomes infected, it can be tested immediately on board the ship without having to send it ashore. 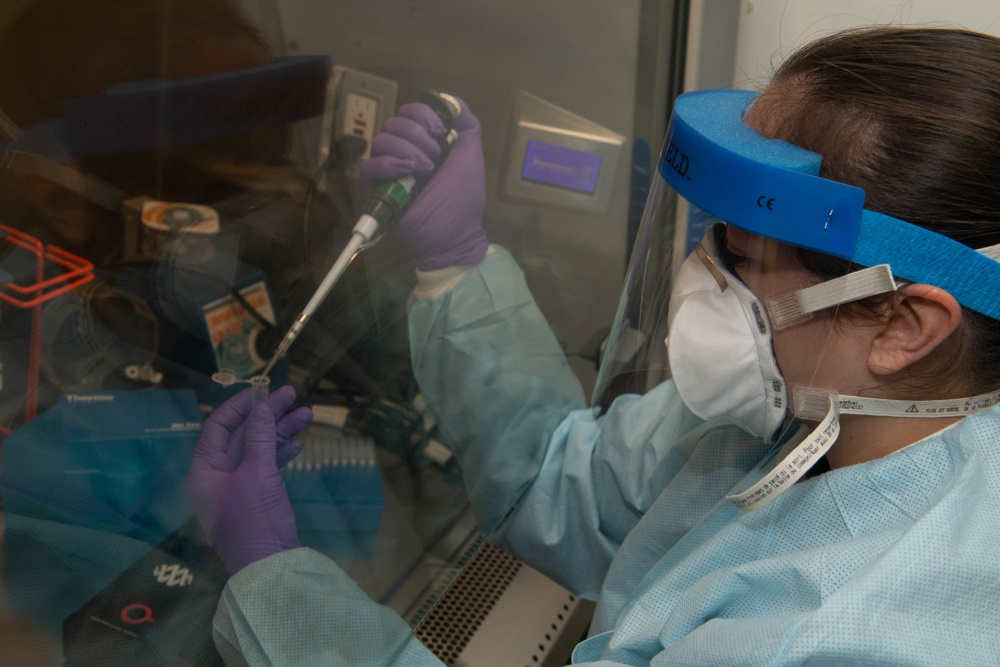 On March 19, U.S. military medical staff set up a temporary medical laboratory on the “Roosevelt” aircraft carrier for the detection of new crown virus samples.

As soon as the epidemic prevention “special forces” entered the aircraft carrier, they set up temporary laboratories and temporary quarantine areas non-stop, and carried out the inspection of all crew members. Subsequently, on March 24, US media revealed that three people on the USS Roosevelt were diagnosed. This was the first confirmed case of new crown pneumonia in a US aircraft carrier, and it was the first time that the US military found a virus-positive case on a warship on a deployment mission. 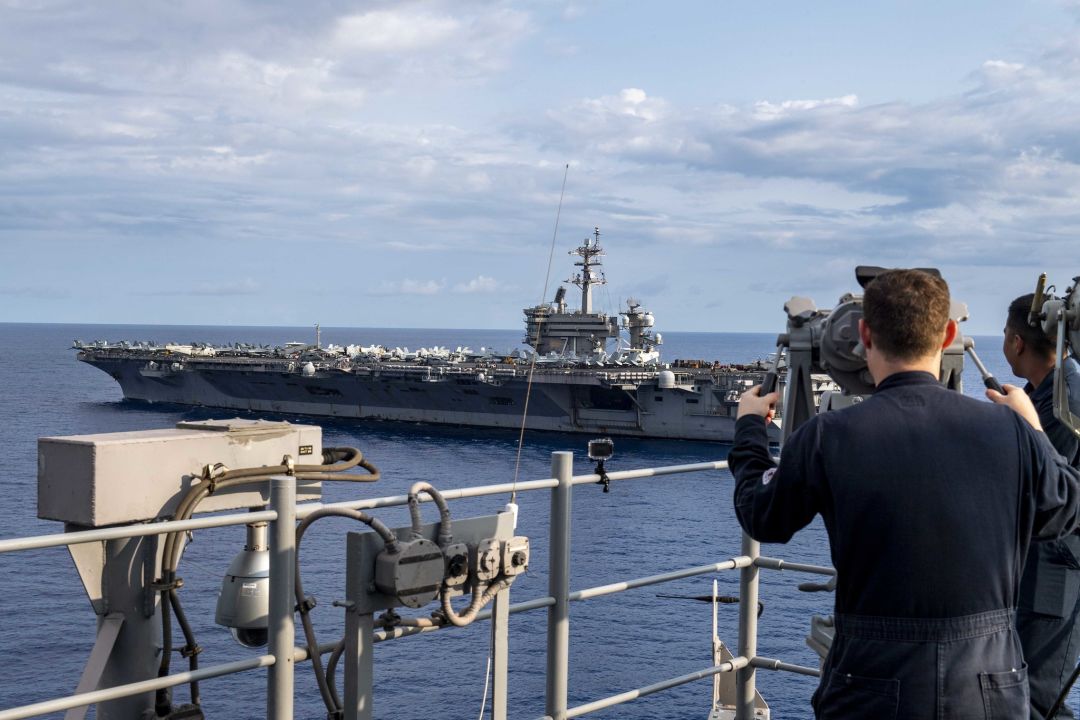 However, on the day when the first confirmed case was revealed, the Roosevelt aircraft carrier was still very active, with six US sevenths, including the USS amphibious assault ship, the Blue Ridge amphibious command ship, the Green Bay and the German City amphibious dock landing ship. The main battleship of the fleet once again held formation sailing training at the Philippine Sea and “showed muscles” at sea.

Judging from the activity trajectory above Roosevelt, the most likely point in time for sailors to be infected with the new crown virus was during the carrier’s visit to Vietnam. Moreover, from the point of time, confirmed cases appeared in the two weeks after the visit to Vietnam on March 10 to March 24, which is also consistent. However, the possibility that the USS Roosevelt introduced viruses through other channels cannot be ruled out. During joint exercises with other US warships and maritime replenishment, the USS Roosevelt may also have personnel exchanges with other US warships. In addition, aircraft carriers sailing at sea are not completely isolated. The C-2 transport aircraft on the aircraft carrier can easily transport personnel between the aircraft carrier and the land, including aircraft carrier crews who are preparing to take vacations and return from vacations.

Military expert Song Zhongping said on the 27th that Roosevelt’s main task at present is to stop at Guam, isolate all personnel at the military base, and thoroughly kill the entire aircraft carrier. According to the previous US Navy ’s response to the epidemic, after leaving a previous port, a US warship must be quarantined at sea for 14 days, and it must be confirmed that no one is infected before it can dock at a naval base. Now the condition of the Roosevelt is more awkward. Just after 14 days of quarantine, the confirmed cases immediately appeared. At present, the aircraft carrier has been hovering for several days at sea in the Philippines. Theoretically speaking, stopping in Guam is a matter of “oil”, but has been slow to act. It seems that the United States is currently at the heart of whether the Roosevelt should be allowed to dock in Guam No exact number.

At present, the Roosevelt has transported several infected sailors to a medical facility at the Guam base for isolation and treatment by means of a ship-based helicopter, but this has also raised concerns among the base personnel. Some U.S. military personnel deployed at the Naval base in Guam have been ordered to transform some base facilities into temporary quarantines in order to contain some of its crew members from the Roosevelt aircraft carrier that has had a new crown virus outbreak. In a report by the Beast Daily on the 26th, an American soldier involved in the construction of the isolation facility admitted that some troops feared that they would be infected with the new crown virus by the crew from the Roosevelt aircraft carrier. The US soldier added: “We’re done.”