On March 26, local time, the director of the National Institutes of Health Francis Collins published the title “Gene Research Shows Origins of New Coronary Pneumonia Virus” In the Nature blog post, citing and supporting an international research team supported by the National Institutes of Health, after comparing publicly available genome data of several coronaviruses, including the new coronavirus that causes COVID-19, concluded that the virus It comes naturally. 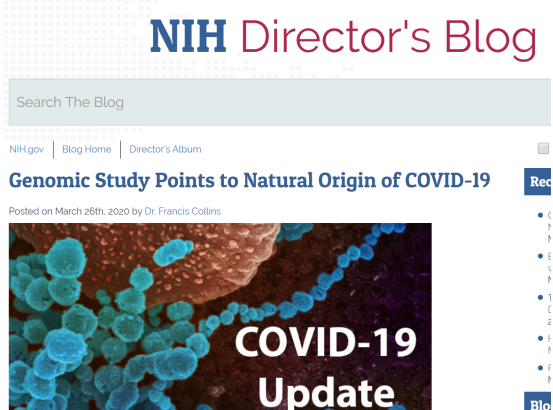 The article begins: “No matter where you open the Internet today, you will surely see articles about the new crown pneumonia virus that became popular in late 2019. Rumors and speculation about the virus seem to spread faster than the virus itself And spread widely. Many unscrupulous people have once made outrageous claims that the new crown virus that caused the pandemic was designed by the laboratory and then deliberately released, which infected people around the world. Fortunately Yes, a recent study on the new coronavirus proved that the virus is naturally occurring, thus breaking the claim with scientific evidence. ”

Collins highlighted in his blog the La Jolla Scripps Research Institute in California. A finding by Christian Anderson, Robert Gary of Tulane University School of Medicine, New Orleans, and their colleagues, among others:

“SARS-CoV-2 spike protein binds to ACE2 receptors in human cells much more strongly than currently All computer-predicted models, the reason for this result may be that the virus continues to evolve under the targeted selection of ACE2 until it has Super strong binding ability. “” That is to say, SARS-CoV-2 has a high probability to evolve its ability to infect humans only by its own efforts. The current level of humans cannot create spike proteins that are so different from the model. ”

As for the source of the new crown pneumonia virus, Collins proposed two ideas: the

first idea is that as new coronaviruses continue to evolve in their natural hosts (may be bats or pangolins), their spike proteins also occur. Mutations that bind to molecules similar to the ACE2 protein in the body and infect human cells.

In the second case, the new coronavirus had already entered animals from humans before gaining the ability to cause human disease. After years or even decades of gradual evolution, they eventually gain the ability to spread from person to person and can cause serious illness.

At the same time, Collins, a senior geneticist, also emphasized that it is impossible for any bioengineer trying to build a coronavirus weapon to design a spike protein with a (strange) virus like SARS-CoV-2. At the same time, he said that the findings of the study allow the people of the world to focus on the most important things now: maintaining good health habits, observing a certain social distance, not believing rumors, not rumors, respecting the epidemic resistance of medical staff and medical researchers Determination and their unremitting efforts in the process.

At the end of the article, he stated: “Next time when you are confused and confused on the Internet because of information about the new crown pneumonia virus, I suggest you visit the official website of FEMA’s” Resist New Rumors “. Maybe it cannot be completely resolved All your questions, but this is definitely the first step and the crucial step in the right direction. It can use professional information to distinguish rumors from facts, and to gather the power of the world to respond to this. Global public health emergencies. ” 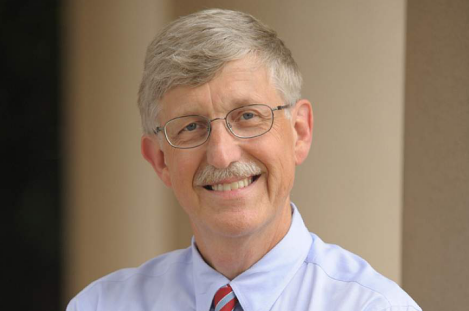 (△ Francis Collins, Dean of the National Institutes of Health)

Francis Collins has been President of the National Institutes of Health for 10 years. Before becoming the Dean, he had already Lead and successfully completed the huge human genome project, known as “one of the most influential NIH deans in history”. And this blog post came out in person to clear the rumors, and has also received many recognition.

Someone commented after commenting: “Excellent results and analysis should be actively disseminated in the global scientific community.”

Others said, “I think most of your articles are too scientific for most people, and I am really Thank you, because too many people have posted too many false conspiracy theory videos and posts on Facebook, which will put an end to some people’s release of fake news at the time of the epidemic. ”

Since the outbreak of New Coronary Pneumonia, the origin, spread and evolution of New Coronary Pneumonia virus have attracted much attention. Many controversial voices have emerged around these issues. Even some American politicians are using this controversy to discredit China and try to create public opinion in the international community, but they have been repeatedly criticized before the facts. (CCTV reporter Xu Tao)

new crown pneumonia, News, USA
Previous PostHow did the virus land on the US aircraft carrier?Next PostOfficials from Huangmei Jiangxi, Jiujiang, Hubei Province have clashes with each other, and the two authorities have been involved in the investigation.