Bill Gates warns: US must stop for at least 6-10 weeks 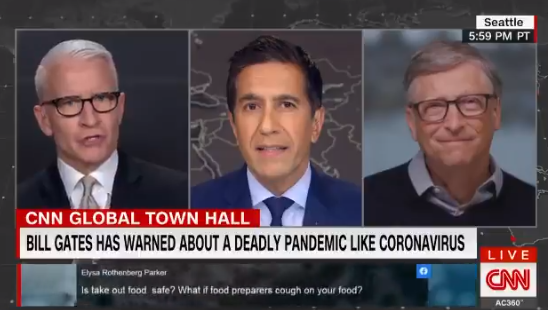 According to foreign media, on Thursday night, Bill Gates warned that there was “no middle ground” in the fight against the new coronavirus, and he called on all parties to work together , Effectively shutting down normal life across the United States to prevent the spread of COVID-19 and minimize its long-term impact on the economy.

Microsoft Responding to questions from Anderson Cooper and Sanjay Gupta, Gates said the United States will not be able to resume normal life before Easter. Cooper did not mention President Trump’s name. The co-founder has always been cautious and does not go into politics, but this issue clearly points to the president’s previous statement that the United States should be allowed to pass before Easter on April 12. It is back to normal, with a little more than two weeks left.

“No, it’s unrealistic, and the numbers are rising,”

Gates said. “This is a nightmare scenario.” Bill Gates warned in 2015 about the potential risks of the epidemic. “I said at the time that we needed to invest in new platforms so that we could quickly diagnose, make medicines and make vaccines to stop the epidemic from spreading,”

he said. In fact, the United States needed to take a longer-term, more coordinated approach. Retreat measures can effectively curb the spread of the disease.

Gates said: “We are entering a difficult period. If we do well, we only need to do it once, six to ten weeks, but it must be for the entire country. We must significantly increase the level of testing and give priority to Testing to ensure we can get through a shutdown so we can address medical issues and really stop it before a large number of deaths occur. “A

few hours ago, the number of confirmed COVID-19 cases in the United States was estimated to be over 81,000, exceeding To all other countries in the world, including the outbreak of China. Gates has warned for years that an uncontrolled epidemic could kill as many as 10 million people. In recent days, he has become increasingly outspoken that the United States needs to take more aggressive action.

“This is a nightmare, I didn’t expect our response to be so slow and confusing,” he said on Thursday night.

Gates acknowledged that closing the country would bring “a huge price,” but said another option The result will be worse.

“We did run into an economic problem, and that’s why you want to minimize downtime. Let states do different things, or think you can do it county by county, but that doesn’t work. Basically The entire country needs to do the same in areas where these infections occur in China. ”

Gates said:” The good news is that the Chinese government’s actions have made this country overcome this disease. “(Sakura) The

following is the full text of Gates’ conversation :

Moderator: Currently in many states, the confirmed cases are below 200. In your opinion, are these states similarly closed?

Bill Gates: for example, there are 1 00 confirmed cases, if we do not downtime , then the number of people infected will grow by 3 per day 3 %. 1 from confirmed cases will increase to 00 1 000 , then increased to 1 0000 , which is double the growth. The sooner you start closing, the easier it will be to reach the peak of the number of people infected. We haven’t reached the top yet. Where there is no closure of the city, we can see the number climb to a high point at the end of April , and the peak of the number of infected people will be very high, and it is currently impossible to predict. It may take another month to reach the peak before the number of infected people gradually decreases. Wherever there are confirmed cases, in fact, due to the problem of our virus detection, because we do not prioritize virus testing, there are actually cases of infection in many places, but even if they only have 100 confirmed cases , this number will rise, and People cross borders , so basically, the whole country needs to implement measures like some parts of China.

Moderator: It is worth mentioning that there were only a few confirmed cases last week, but this week there were more than 1,000 or even more than 2,000 cases. You mentioned the key issue. Another issue that interests me is the timeline of the new crown virus. The virus has gone on for three and a half months and spread to 150 countries. What progress would we make if we invested in all available analytical institutions, such as Microsoft? Can you give us a clear answer?

Bill Gates: Rich countries are very likely to implement uniform and strict closure measures across the country to prevent most people from being infected. This is also an example shown by China, South Korea and other countries. Speaking of poor countries, you may live near slums or need to go out and buy food every day. This makes isolation more difficult and the problem is tricky. By this summer, I don’t think rich nations that are capable of fighting the virus will no longer ban the country. From a viral perspective, the closure of the parliament has reduced many deaths. There are still many challenges in developing countries.

Moderator: In our last hour’s program, I asked Dr. Fauci a question. Some states reported only 100 or 200 confirmed cases. He said that these states need to do virus detection and confirm the tracing of confirmed infections. Yes, while the number of people infected is still small, we need to pay close attention to the source of the disease. He used a lot of verbs to indicate the future, such as what needs to be done, what should be planned, etc. I asked him if this was happening? He replied that much remained to be done. From your point of view, we must now take these measures immediately. If we do not immediately track the source of the disease, it now seems that there is no place where the virus has attacked, and we will immediately see them attacked.

Bill Gates: That’s true. We hope that places like New York should be closed earlier, and that the burden on medical staff will not be so heavy and it will not pose such a big challenge for medical staff. The entire country should be coordinated. People are not being asked to cross county boundaries or similar bans. How many confirmed cases are there in the country? Are we actively testing and tracking the source of infection? I don’t know if this is good news, but I very much agree with Dr. Fauci’s point of view. Due to the inconsistency of detection capabilities, etc., the number of infected people is very uncertain. He is a positive voice to promote the fight against the epidemic.

Bill Gates: This has been our focus until we reduce the number of confirmed cases and implement active detection and quarantine. It is extremely painful to implement high social isolation. I call it “closed.” There is no middle choice. It is difficult to say that you will not infect others or be infected. Until we determine that the number of people infected is at a minimum, even if you tell everyone you can buy a house, a car, a restaurant, etc., I still very much doubt that people will really do it. People want to protect the elderly and their parents. In short, the sooner we “take medicine”, the sooner the highest-level medicine, the sooner we will get out of trouble and never return to it again.

Bill Gates: The absolute number needs to be very low. We need to actively detect positive patients and detect them as early as possible before the virus spreads. That is to say, if you look at other countries that have acted earlier, there are also some countries that have not implemented closures. This is our lesson. The absolute number needs to be very low, and we need to take some precautions. Even if our space is small, we don’t want the virus to spread.

Moderator: I don’t want to be politicized, but for the people, hope and expectations are good. Some people imagine that everyone can go to church to celebrate Easter in mid-April or early April, or resume normal work. In your opinion, these don’t seem to be practical?

Bill Gates: No, these sound practical. The number of confirmed diagnoses is still rising, and only after the number of confirmed cases peaks and falls sharply to a certain extent can people expect things to happen. There is a lot of good news now, such as vaccine development. Although it may take 18 months , our foundation is also sponsoring it . We look forward to making the vaccine available to everyone in the world . In the long run , vaccines are the most critical . People want to know , we do not have enough staff to make you swab test . On Monday, the FTA announced that if you do a self-test, the self-test will be as accurate as the test performed by your healthcare provider. This means that more people will be tested in a timely manner. We continue to have good news and treatment plans, although treatment plans have not been proven. The Foundation is also focusing on human testing. Some innovations we can do ahead of time. If you look at our confirmed numbers, no state’s confirmed case curve is flat or falling. Insufficient detection capacity has prevented us from detecting some cases in a timely manner. So, what everyone expects may happen, but in mid-April, the tunnel exit is not bright. (Beg)

Bill Gates, new crown virus, Outbreak, technology
Previous PostOfficials from Huangmei Jiangxi, Jiujiang, Hubei Province have clashes with each other, and the two authorities have been involved in the investigation.Next PostTraveling around six airports in four countries, international students just fled the UK