number of newly diagnosed pneumonia patients in the United States has become the world’s number one, the Trump camp has spared no effort to deduct its ineffective pandemic from others .

On March 26, Peter Navarro, a White House trade adviser, did not face the host ’s question on the CNN program, talking about how the Trump administration is working to fight the epidemic, and repeatedly blaming China The Obama administration provoked moderator Brianna Keilar to repeatedly criticize him for “wasting time.”

In the end, when Navarro accused China again, Kayla did not give him the opportunity to continue, and ended the interview directly. 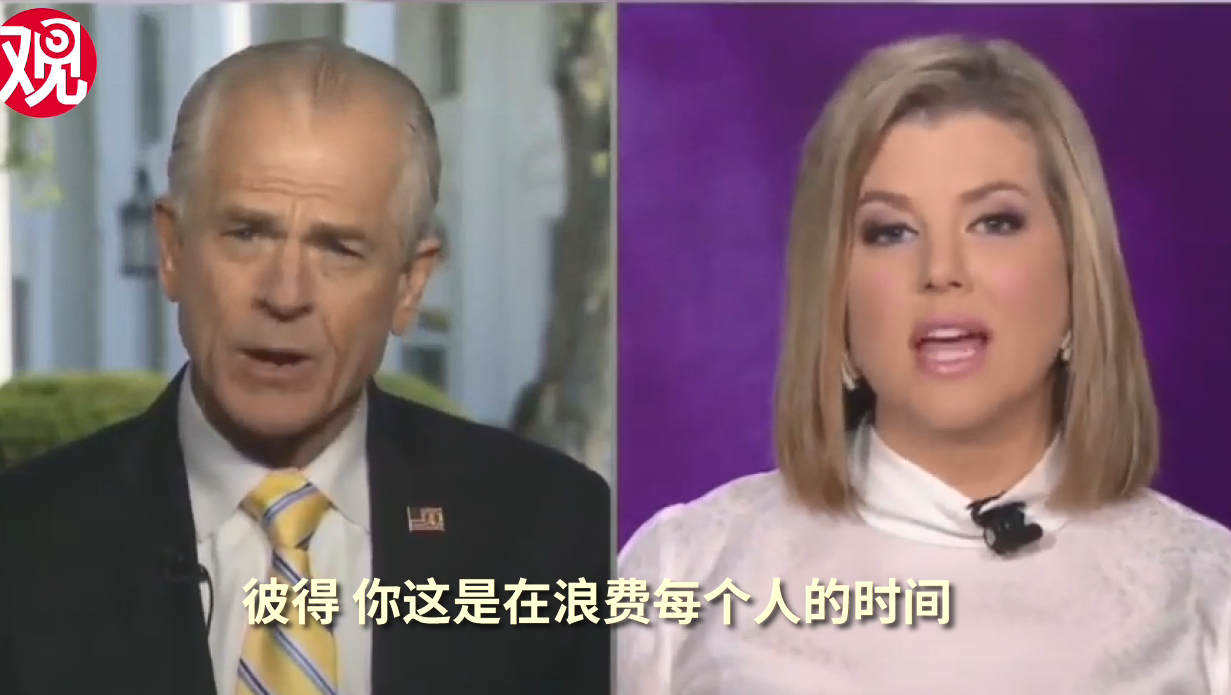 due to the surge in the number of infections, currently the nation’s medical supplies are in short supply situation. On the 26th show, Kayla connected to Navarro, questioning that the US federal government has not done more to coordinate supply and emergency production.

Navarro first said that his department was working to coordinate and mobilize businesses around the world, and to help the states obtain medical supplies. When Kayla tried to interrupt and question, Navarro asked her not to make the crisis “sensational” because it would “cause more anxiety and panic” and “make our work harder.”

“I’m not sensational, I’m just stating the facts.” Kayla countered, noting that the governors lacked the support of the federal government and were isolated from allocating and coordinating supplies to get the medical supplies they needed.

Subsequently, Navarro began to excuse Trump and aimed his “muzzle” at China. He first claimed that China had not notified the United States earlier, “the world has been delayed by 6 weeks, so we are solving these problems every day … … ”

Kayla interrupted him:” But to be honest, the government is obviously not prepared for this, you know how terrible these viruses are, and they broke out. The government knew during the summer preview that if this (virus outbreak) happened, There will be a problem … that’s why we asked you to talk about the supply problem. ”

She took a ventilator as an example, saying that the United States currently has about 200,000 units, but experts say it may be 1 million units.” Can you meet this requirement? ”

Navarro began flips” Huang Li “:” let me introduce you to the history of it, in 2009 when Biden (then US vice-president) and the administration to deal with the H1N1 flu crisis …… ”

” Peter, why are you Wasting time on it without solving your problem? “Kayla asked before he finished,” Why are you talking about this? I’m asking you if you can get 1 million ventilators. ? ”

Navarro still does not face this problem, but outright statement to him said,” it is the fastest “provide the necessary supplies to the Americans. He also said: “Don’t say that we are insufficiently prepared for this. We have inherited a severely insufficient reserve system. Many people in the last two governments have issued warnings …”

“You are wasting everyone’s time, Peter, Why talk about this? It’s now 2020, and the president was elected in 2016. Can you get a million ventilators? “Kayla interrupted again. 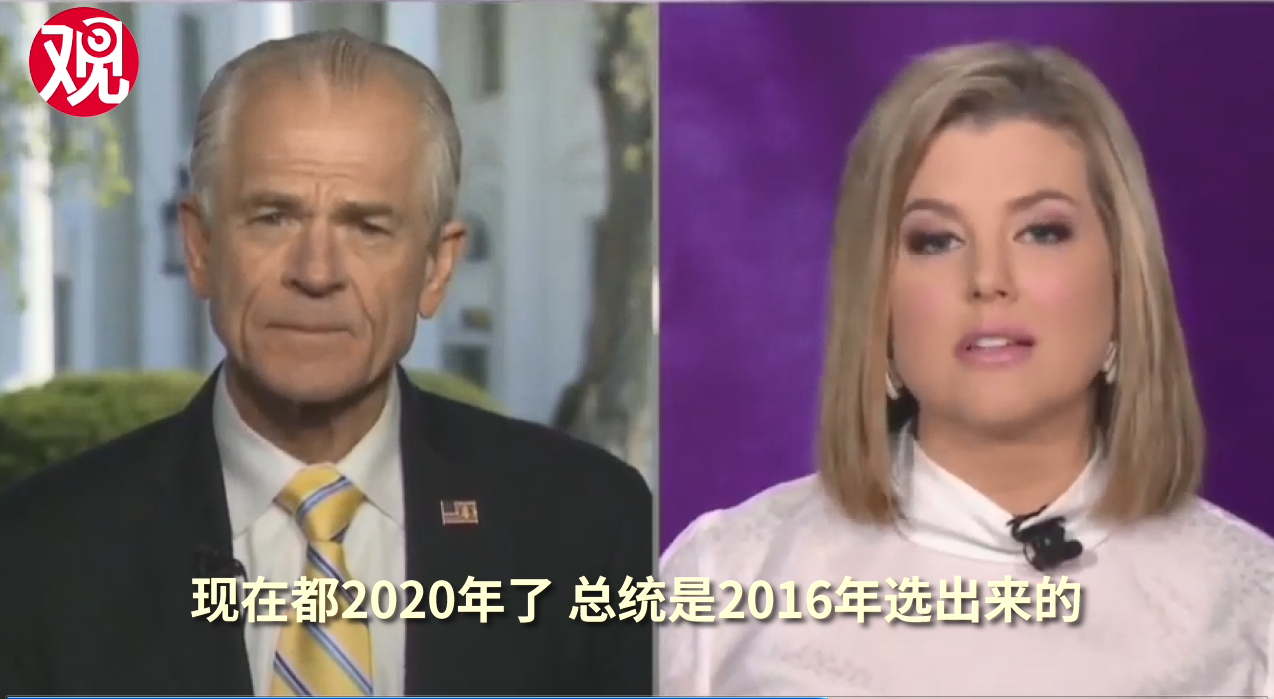 This time, Navarro called the number “far beyond our needs.” He also said that they were increasing production and getting the ventilator they needed as soon as possible.

After another few minutes of talking to chickens and ducks, Navarro once again dumped the pot to China, describing how the government worked hard, claiming that the United States was in China, and it was in a bad situation.

“Peter, saying this is just a waste of time,” Kyla accused Navarro for the third time.

“Why is this a waste of time?” Navarro asked.

“We’re out of time. This is ridiculous.” Kayla ended the interview without giving him a chance to talk further.

As an important figure in the Trump administration, in the 15-minute interview, Navarro was always avoiding Kayla ’s question, which also made American netizens confuse: “Kayla hosted a master class to teach everyone how to stop An interviewee who evaded the question avoided the question. ”

” Navarro: Can I speak? Keira : Can you answer this question? The job of the interviewer is to get the answer to the question, not to make the interviewee nonsense and delay time. ” 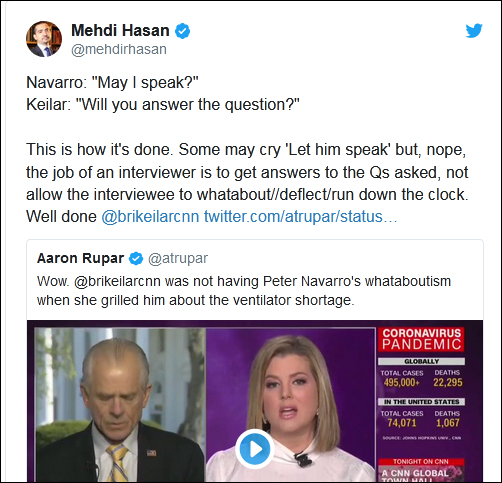 According to real-time data from Johns Hopkins University, as of March 26, Eastern Time At 9 pm, the number of confirmed new coronary pneumonia cases in the United States has reached 85,486, making it the country with the highest number of confirmed diagnoses worldwide. 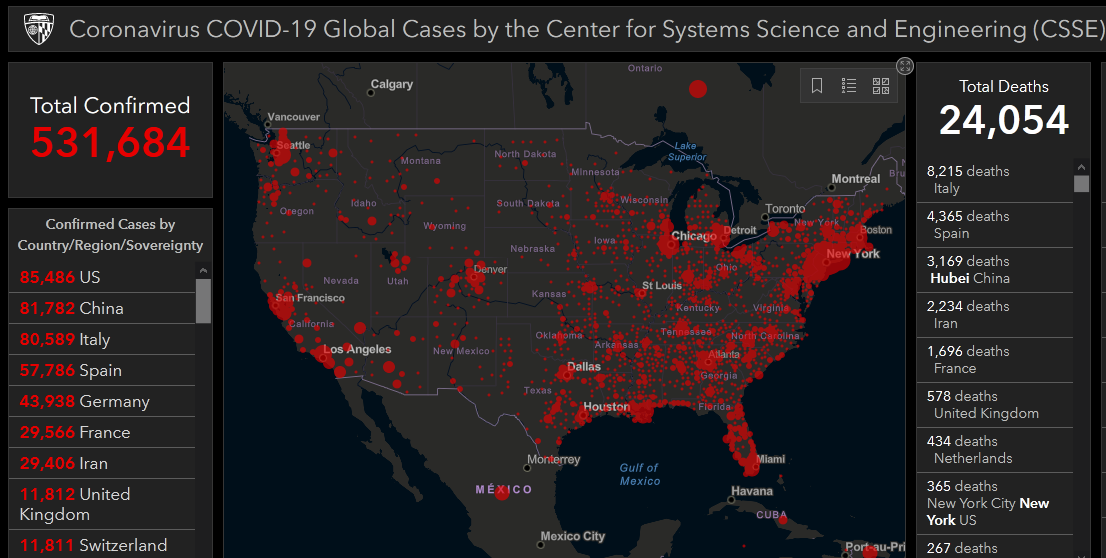