[Global Times-Global Reporter Bai Yunyi] According to the Spanish media “National News” and “World News” and other media reports, Spain purchased a number of new crown virus rapid detection kits The results are inaccurate. The accuracy of the kit should exceed 80% as required, but this batch of kits is only 30%. It is reported that these kits were produced by Shenzhen Yirui Biological. Because the incident coincided with Spain’s announcement that it would spend 432 million euros to buy medical supplies from China, the incident caused great concern on the Spanish social network. Subsequently, the Chinese Embassy in Spain, the Spanish government, and the companies involved have spoken on the matter.

The Chinese ambassador to Spain issued a statement on Twitter on the 26th, stating that kits donated to Spain by groups such as the Chinese government and Alibaba did not include Shenzhen Yirui Biological products. The kits involved have nothing to do with a large number of medical supplies procurement agreements with China announced by the Spanish Ministry of Health on the 25th, which have not yet been cleared from China. Shenzhen Yirui Biological is not on the list of medical device sales companies that the Ministry of Commerce has provided to Spain, and has not yet obtained a sales license from the State Drug Administration of China.

The Spanish government said in a statement on the 26th that the batch of defective kits was not purchased directly by the Spanish government from the Chinese government, but imported from a Chinese manufacturer through a domestic supplier. These kits have nothing to do with the purchase of medical supplies from China announced by the Spanish Minister of Health on the 25th. At the time of the transaction, Spain had not yet received the sales list provided by the Chinese company. Since this shipment has CE certification, it can be sold in the EU according to law. The Carlos III Health Institute of the Spanish Ministry of Health analyzed the reports provided by suppliers based on clinical studies by Chinese manufacturers.

The statement said, but then the Madrid Hospital and Carlos III Health Institute conducted preliminary tests on these batches of kits and found that the accuracy of the kits was insufficient. Spain has immediately returned the kits and contacted the supplier to request a replacement kit. The statement said that the Spanish government had previously checked the reliability of its intermediate suppliers. 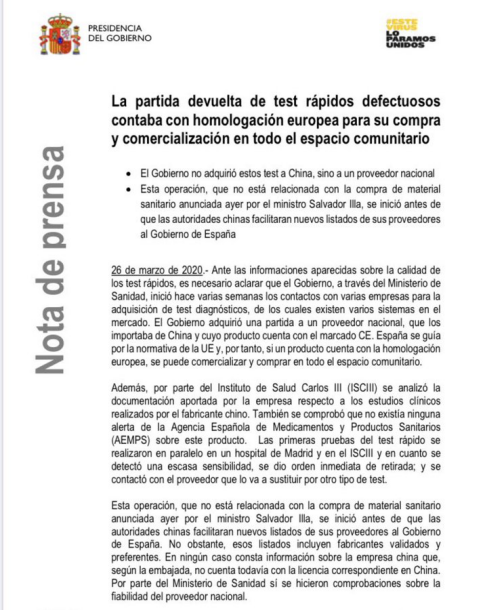 On the morning of the 27th, Shenzhen Yirui Biological also issued a statement on the matter, saying that Yirui Bio attaches great importance to it after seeing the report, and immediately contacted the Spanish Ministry of Health, and later learned in the process of communicating with relevant verification hospitals. During the clinical verification process in the hospital, the hospital used Yirui New Crown antigen quick test products and PCR for comparison experiments, and the results accorded with the PCR detection rate was low. It is understood that during the sampling and sample extraction process, the sampling, extraction and operation of nasopharyngeal swab samples may not be strictly followed in accordance with our operating instructions, resulting in a decrease in sample detection accuracy.

Yirui Bio said that the company has produced the product operation video and operation instruction card for the first time, and communicated with customers that it is necessary to strictly follow the operation video and product instruction manual, especially the operation of sample processing. At present, the Spanish Institute of Infectious Diseases and Clinical Microbiology is re-validating new batches of rapid antigen detection products in accordance with the operating guidelines provided by Yirui Bio. It is understood that the current verification status is good, and it is expected that it will A formal verification report has been released.

The statement of Yirui Bio also stated that the Spanish Ministry of Health decided to replace the new batch of products, but decided to continue to execute the contract with Yirui Bio, and asked Yirui Bio to deliver related products and equipment on time to ensure the timely availability of Spanish anti-epidemic substances. supply.

According to Yirui Bio’s statement, the company officially obtained the EU CE certification of four new crown series products on March 12, 2020; as there is no registration certificate in the country, the company’s related new crown products have not been sold in the country. , For research use only in China.