[Global Report] According to Hong Kong media reports including Hong Kong’s ” Pao” “East Network”, 21) In Yuen Long, Hong Kong, rioters have illegally assembled and carried out violent activities such as road blocking and arson. Hong Kong police carried out dispersal and arrest operations. It was reported that during the police arrest of about 60 people, Huang Weixian, an opposition district member and chairman of the Yuen Long District Council, was also arrested for allegedly obstructing police officers from performing their duties.

“Ta Kung Pao” states that the mob threw incendiary bombs and set fire to the paper on Heyi Road last night, leaving burnt debris in the middle of the road. When the riot police arrived, the thugs threw forward hard objects to attack. Police warned that the tear gas and pepper spray were used to stop the violence. Fire trucks were also present to assist in the fire fighting.

The riot police then pushed forward the line of defense and warned the mob of suspected participation in an illegal assembly or procession by raising a blue flag and using a loudspeaker, asking them to return to the sidewalk, not to block traffic and disrupt social peace. The mob ignored the advice, and the police “Athlon Team” took action to track down the mob in the Hongfa Path, successfully subdued and arrested many people, including Huang Weixian, chairman of the Yuen Long District Council and a member of the Democratic Party who was suspected of obstructing police officers from performing their duties. 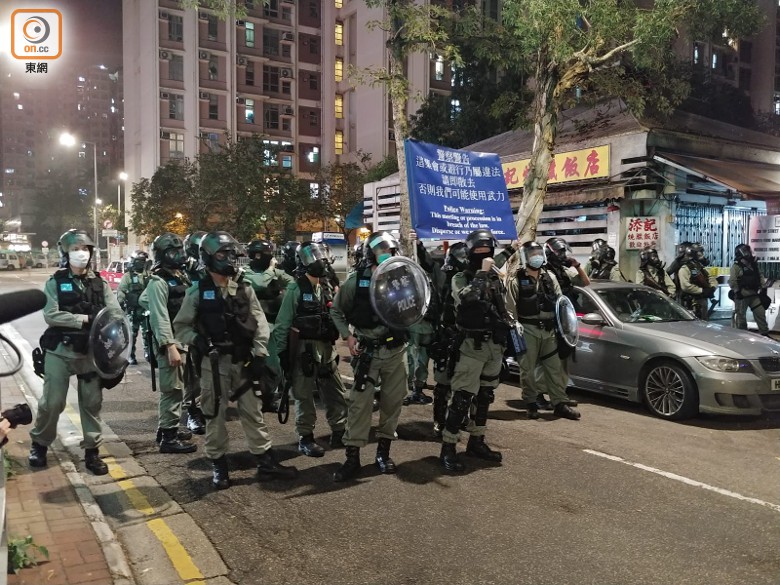 The report mentioned that another group of rioters was making trouble outside the MTR Yuen Long Station, and riot police arrived to intercept and investigate many people. Opposition member Xu Zhifeng of the Hong Kong Legislative Council was also present. He did not wear a mask in the crowd, and while the police dispersed the mob, he stood in front of the riot police and obstructed law enforcement. In addition, members of the Hong Kong Legislative Council, opposition members Yin Zhaojian and Tong Junyu, were also present, taking off their masks for cleaning the pepper spray.

“Ta Kung Pao” stated that according to its reporter’s observation at the scene, many thugs did not wear masks during the gathering in Yuen Long last night, and even called slogans from time to time, ignoring the risks of the spread of New Crown virus in the community.

Member of the Hong Kong Legislative Council, Chen Hengzheng, reprimanded the mob for destroying humanity. Under the urgent need of society to unite to cope with the epidemic, they are still creating chaos and doing wrong. He demanded that the police strictly enforce the law to protect the safety and health of the public. He also said that last year’s riots and the current epidemic have caused many people to lose their jobs. Continuing to do things will worsen the livelihood of the citizens, and I am afraid that the economy and confidence will decline. He called on chaotic elements to stop “harming speculation” and harm Hong Kong .

Chen Hengzheng also criticized opposition lawmakers and district members who ignored the risk of virus transmission and took the lead to incite crowds to gather and not even wear masks to spit. He said that the vice chairman of the Yuen Long District Council, Mai Yecheng, had been quarantined for quarantine due to his son’s diagnosis. Opposition district members who had met with Mai Yecheng in the district council earlier should have been isolated, but they were around the community. Walking, regardless of the risk of “spreading poison”, residents may be infected at any time. Opposition politicians can be described as “god hate ghosts”.