Severe fatality rate of new crown pneumonia in the United States is as high as 67%? Experts think so

Home Health Severe fatality rate of new crown pneumonia in the United States is as high as 67%? Experts think so
Health
March 22, 2020March 22, 2020By daydayhub
0

Original title: Severe fatality rate of new crown pneumonia in the United States is as high as 67%? Experts look at this

(People’s Daily Health Client Reporter Li Ningqiao Jingfang) On March 19, a research paper published by experts from the University of Washington in the Journal of the American Medical Association (JAMA) pointed out that as of March 17, 2020, the new crown in research The mortality rate of pneumonia patients was 67%, severe patients was 24%, and ICU discharge rate was 9.5%.

In total, the study included 21 patients with severe SARS-CoV-2 infection. The initial symptoms of these severe patients included shortness of breath (76%), fever (52%), and cough (48%). Before the visit, the average symptom onset was 3.5 days, and 17 patients (81%) were admitted to the ICU less than 24 hours after admission. Complications were found in 18 patients (86%), the most common of which were chronic kidney disease and congestive heart failure. 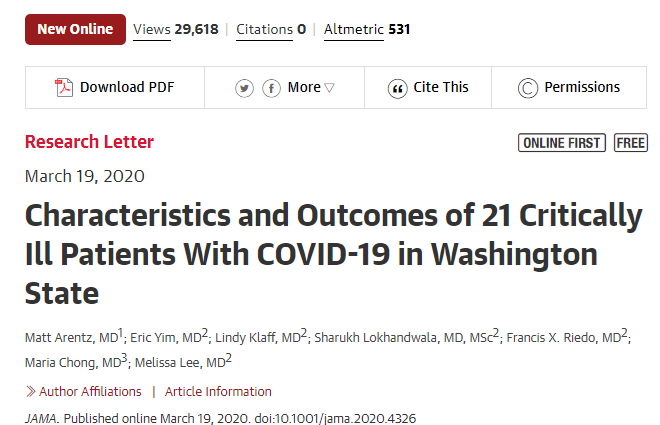 For this, the People’s Daily Health Client reporter interviewed Zhang Hongtao, an associate professor of research in the Department of Pathology and Experimental Medicine at the University of Pennsylvania Medical School. He said that up to 67% of deaths The rate is calculated for severe patients with underlying diseases, such as respiratory disease, cardiovascular disease, and patients infected with neocoronavirus at the same time, and does not represent the mortality rate of patients infected with neocoronavirus throughout the United States.

According to the current data, as of March 21, the cumulative diagnosis of new crown pneumonia in the United States was 19,624, the number of deaths was 260, and the case fatality rate was about 1.32%. On March 1, the WHO noted that the mortality rate for critically ill patients exceeded 50%. At the same time, a report released by the U.S. Centers for Disease Control and Prevention on March 18 shows that in the United States, about 80% of new coronary pneumonia deaths are older than 65 years of age, and the risk of severe new coronary pneumonia and death increases with age; patients aged 85 and over, Mortality is highest at 10% to 27%; patients aged 65 to 84 years have a mortality rate of 3% to 11%. No deaths have occurred in patients under 19 years of age.

“For critically ill patients, let alone the new crown virus, even ordinary influenza viruses are also deadly.” Professor Zhang Hongtao told the People’s Daily Health Client reporter that such patients belong to high-risk infection groups. It also reminded doctors and patients of the importance of the virus to a certain extent, adjusted the treatment plan in time, strived for cure opportunities for patients, and paid attention to the protection of the new crown virus.

Will the sample size of 21 patients in this research paper affect the accuracy of mortality results?

Professor Zhang Hongtao said that the object of this study was only special patients with severe illness, and case reports belonging to a special group. The sample size did not affect the accuracy of the results.

The paper states that the incidence of ARDS (acute respiratory distress syndrome) in these severe patients is high, so the risk of death is high. The patient’s initial symptoms included shortness of breath (76%), fever (52%), and cough (48%). This study represents the case of particularly severe patients infected with SARS-CoV-2 in the United States.

Earlier, Professor Yang Jiong, chief expert of the Department of Respiratory and Critical Care Medicine, Zhongnan Hospital of Wuhan University, also said in an interview with the People’s Daily Health Client reporter that many patients with new coronary pneumonia did not get rescued because of their disease progression to ARDS. Death at this stage The rate is up to 30% -50%. He also said that patients who cannot breathe in oxygen during the ARDS stage need to be treated with ventilator, intubation, extracorporeal membrane oxygenation (ECMO), etc. and a complete set of treatment guidelines, but not all patients can pass these Method was rescued.

“As for why ARDS is developed? Is it because the virus is too large and the concentration is too high? Or the immune response is too strong? Hard to say! So far, the mechanism of ARDS has not been figured out yet,” said Professor Yang Jiong.

new crown pneumonia, News, USA
Previous PostOne bad news after another, the world’s most powerful U.S. militaryNext PostThe number of new diagnoses and deaths in Italy is too alarming …