Under the shadow of the epidemic, Spain has suspended 80 years of uninterrupted traditional festivals

Home Economy Under the shadow of the epidemic, Spain has suspended 80 years of uninterrupted traditional festivals
Economy, Health
March 21, 2020March 21, 2020By daydayhub
0

Original title: Straight | In the shadow of the epidemic, Spain has suspended 80 years of uninterrupted traditional festivals.

On March 19th, this day should have been the climax of the Faya Festival in Valencia, Spain, but it has been crowded at this time in previous years. The downtown street is deserted, and no one can see it.

Just nine days ago, the Valencia Autonomous Region government just announced that this year’s Faya Festival will be postponed to July. 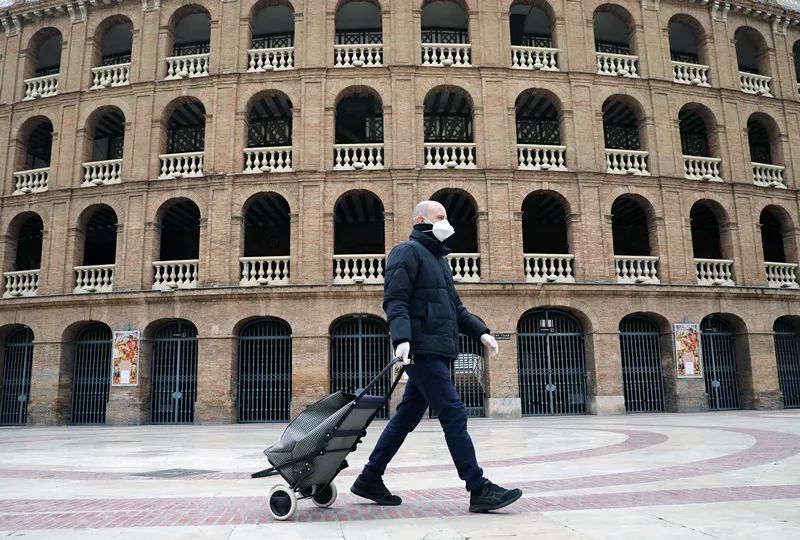 On March 20, a person wearing a mask walked in front of a closed supermarket in Valencia. Xinhua News Agency / European Union’s

. The Faya Festival, which is listed as a World Intangible Cultural Heritage by UNESCO, is one of the famous traditional festivals in Spain. Every year from March 14th to 19th, millions of tourists flock to the streets of Valencia to watch Falla dolls made of flammable materials such as cardboard and foam.

On the night of March 19, everyone will be burned. The streets and alleys of the city are full of fire, and people welcome the arrival of spring in the fireworks and cheers. 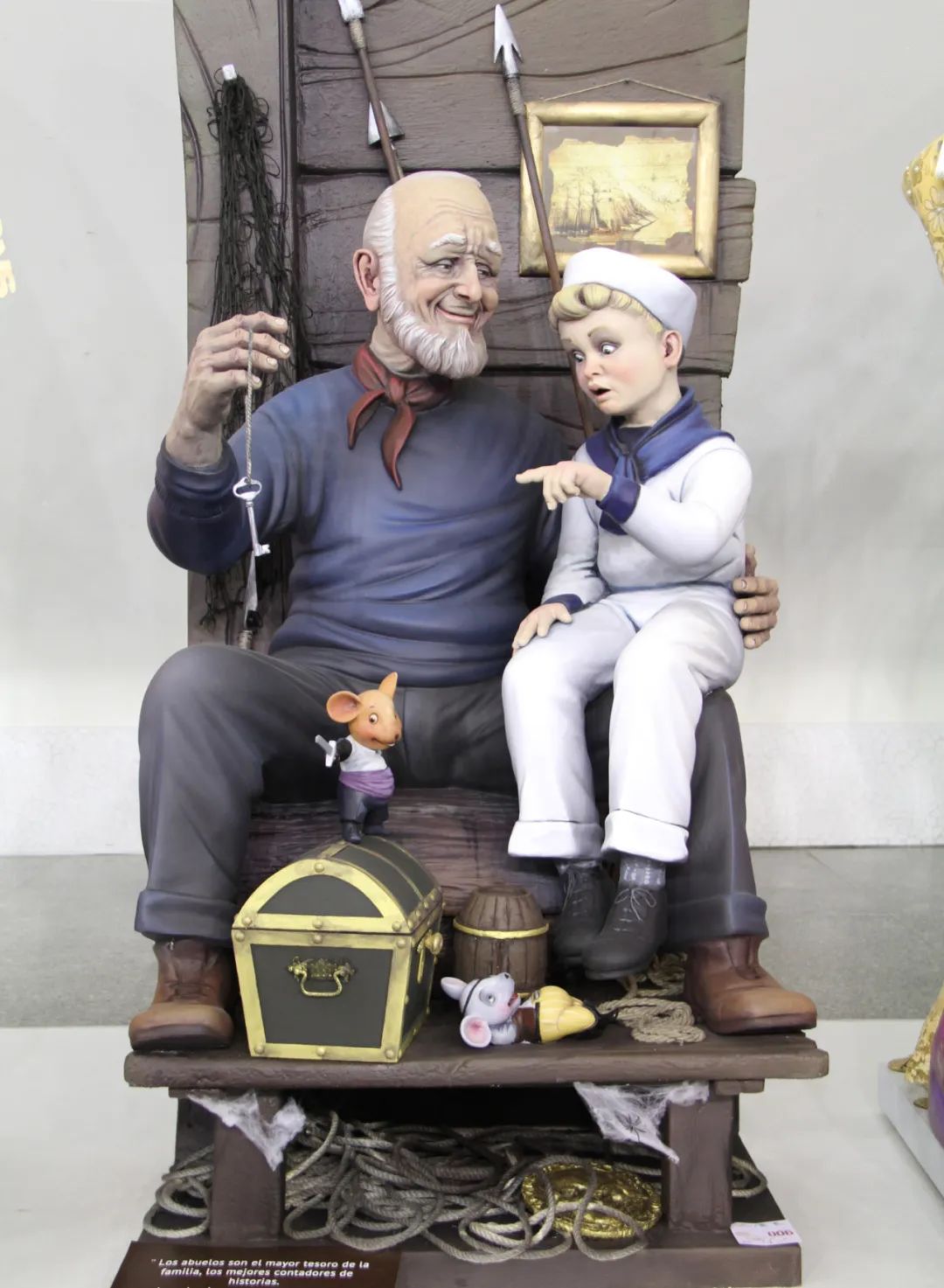 This is the puppet filmed at the Faya Festival Doll Show in Valencia in 2017. Xinhua News Agency reporter Feng Junwei photographed

that the celebration of the Faya Festival has never been interrupted in the past 80 years, and its last “missing contract” dates back to the Spanish Civil War in 1939. But this year, the epidemic of new crown pneumonia has pressed the pause button for this ancient festival.

With the extension of the Faya Festival, in the past few days, some Faya dolls that have been placed on the street have been dragged back to the warehouse to be stored in the future, waiting for the “seeing again in the sky” in the future; but other larger dolls have been on the day of assembly They cannot be dismantled, and the local government has to choose to burn them quietly at night to avoid causing crowds to gather. 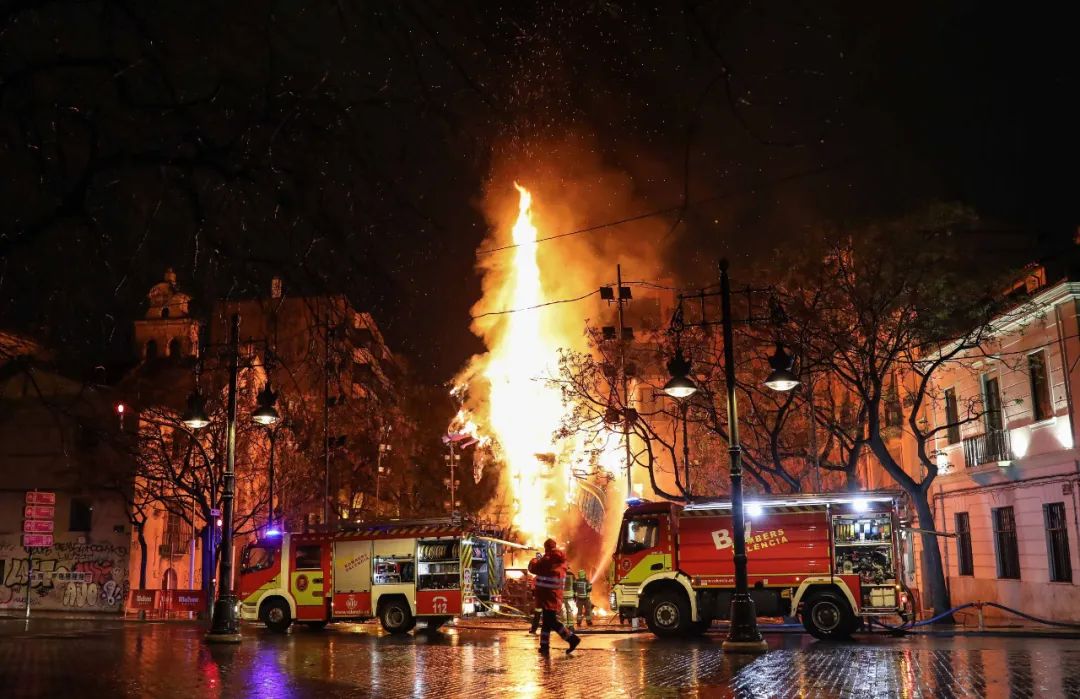 Dolls are the hard work of nearly 100,000 puppet teachers for a whole year. Now that the Faya Festival is postponed, many puppet teachers may not be able to get order-related production costs. The Valencia government has to Come and subsidize some of the costs.

In addition to puppet making, the food and beverage, flower sales and other industries have also been severely affected. The estimated total receipts during the festival period for local hotels alone reached 541 million euros, but all orders have now been cancelled. According to Puig, chairman of the Valencian Autonomous Region, Faya Festival generates nearly 700 million euros in revenue for the city every year.

Other famous Spanish festivals also suffered a fate similar to that of Faya. The city of Seville recently announced that it would cancel the celebration of Holy Week and postpone the prestigious April festival until September. 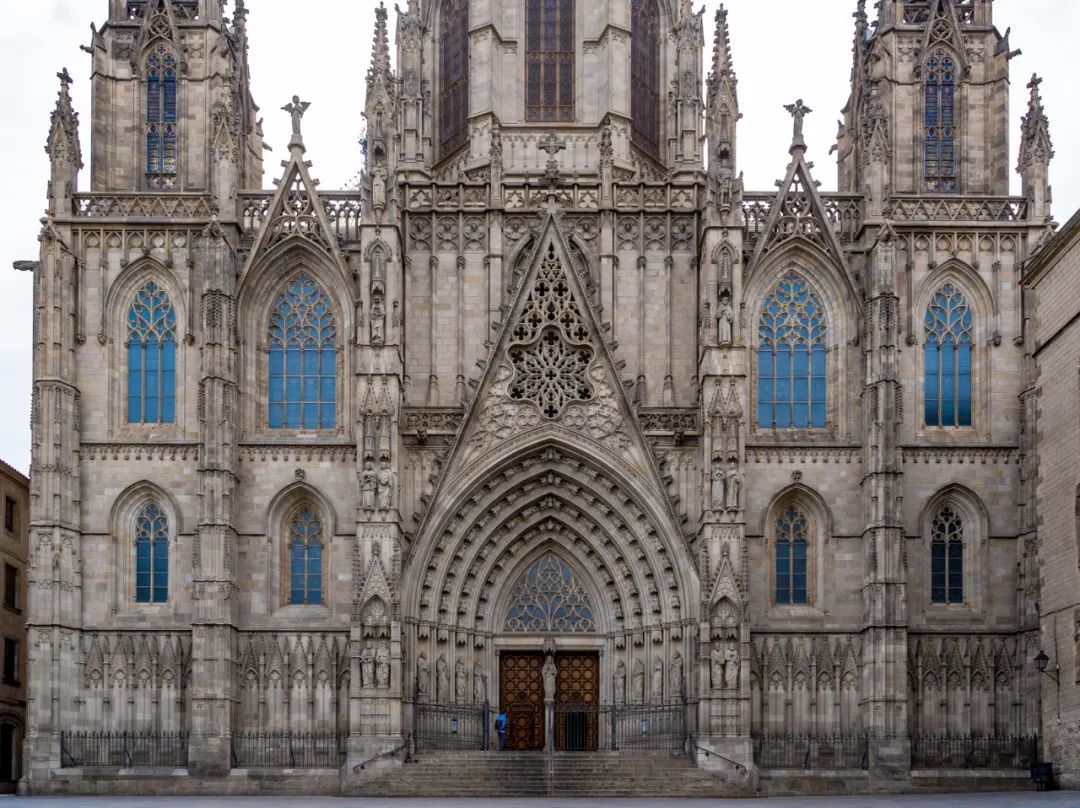 This is a church photographed in Barcelona, ​​Spain on March 18. Xinhua News Agency (photo by Juan Gossa)

In fact, in April and May of the past two years, these two festivals can contribute 80% of the annual revenue of the local service industry; only the April Festival brought the city of Seville The economic benefits reached 900 million euros, and the economic value created accounted for 3% of the city’s gross domestic product; and Holy Week can also bring 400 million euros into Seville every year.

tourism has always been one of Spain’s pillar industries. According to data released by the National Statistics Center, Spain’s tourism industry contributed a total of 148 billion euros in 2018, which is equivalent to 12.3% of the national GDP.

However, the epidemic of new crown pneumonia has made tourism one of the industries most affected by the epidemic. As the country entered a state of emergency, all restaurants and taverns were closed and no longer open to the public. On the 19th, the government ordered another 7 days to close all accommodation facilities, including hotels and other facilities open to the public, but not for health departments. Isolated hotel. Spain’s tourism industry has stalled. 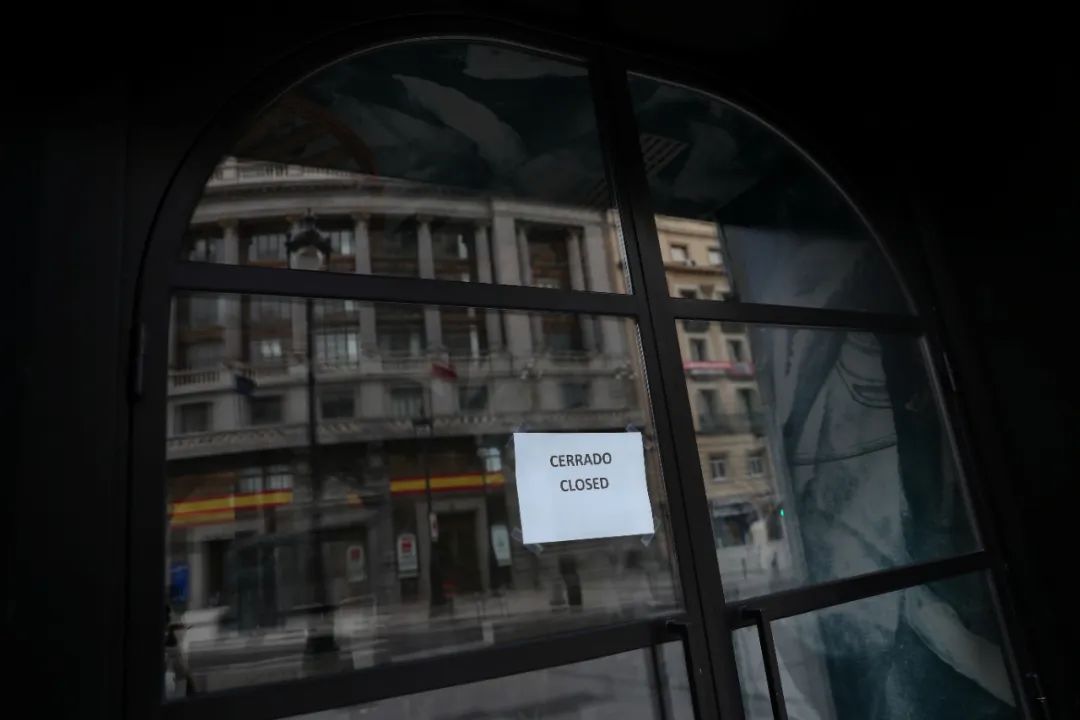 On March 15, a restaurant posted a closing notice on the streets of Madrid. Xinhua / Reuters

On the other hand, the aviation industry, which is closely related to the tourism industry, has also been hit hard. Spain ’s Minister of Transport Avalos revealed on the 19th that passenger traffic at the airport has been reduced by 50% after the government declared an emergency. The Spanish Airline Association said that in Spain, 4,400 flights were cancelled in the second half of March.

Iberia’s parent group, IAG, revealed that the group ’s passenger capacity (calculated based on available seat kilometers) in the first quarter of 2020 fell by 7.5% year-on-year; it is expected that its capacity will fall by 75% from April to May this year about.

At the same time, the company will also implement “temporary employment adjustment measures”, leaving multiple employees on leave without pay, which will affect up to 13,900 of the company’s 17,000 employees. 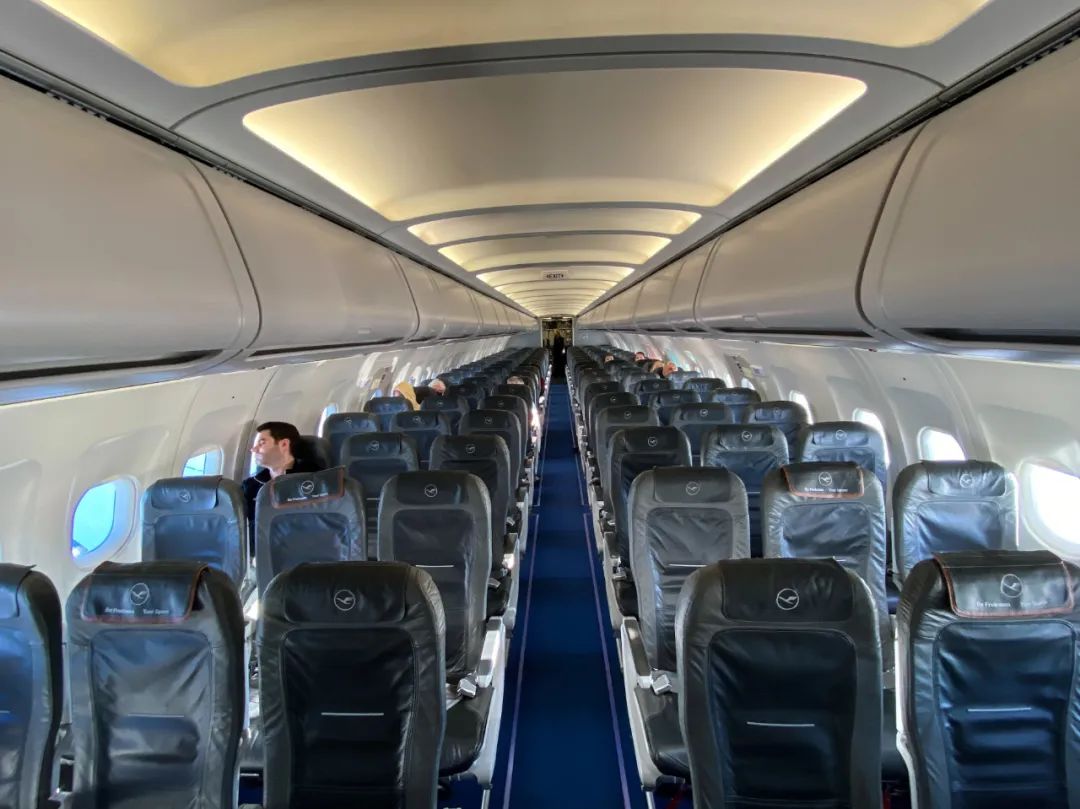 On March 18, a flight from Frankfurt, Germany to Barcelona, ​​Spain was almost empty. Xinhua News Agency / France and France’s

“temporary employment adjustment measures” is a mechanism in Spanish labor law. According to regulations, when a company’s demand for its products or services has decreased significantly due to factors such as force majeure, and corporate activities have declined significantly, this mechanism can be used to temporarily suspend contracts with a large number of employees and retain only the employment relationship with them.

Under the epidemic, many companies in Spain have filed relevant applications. The parent group of the well-known clothing brand Zara, the Inditex Group, announced that if the state of emergency continues beyond April 15, the group will implement this measure from 25,000 of its 48,000 employees. 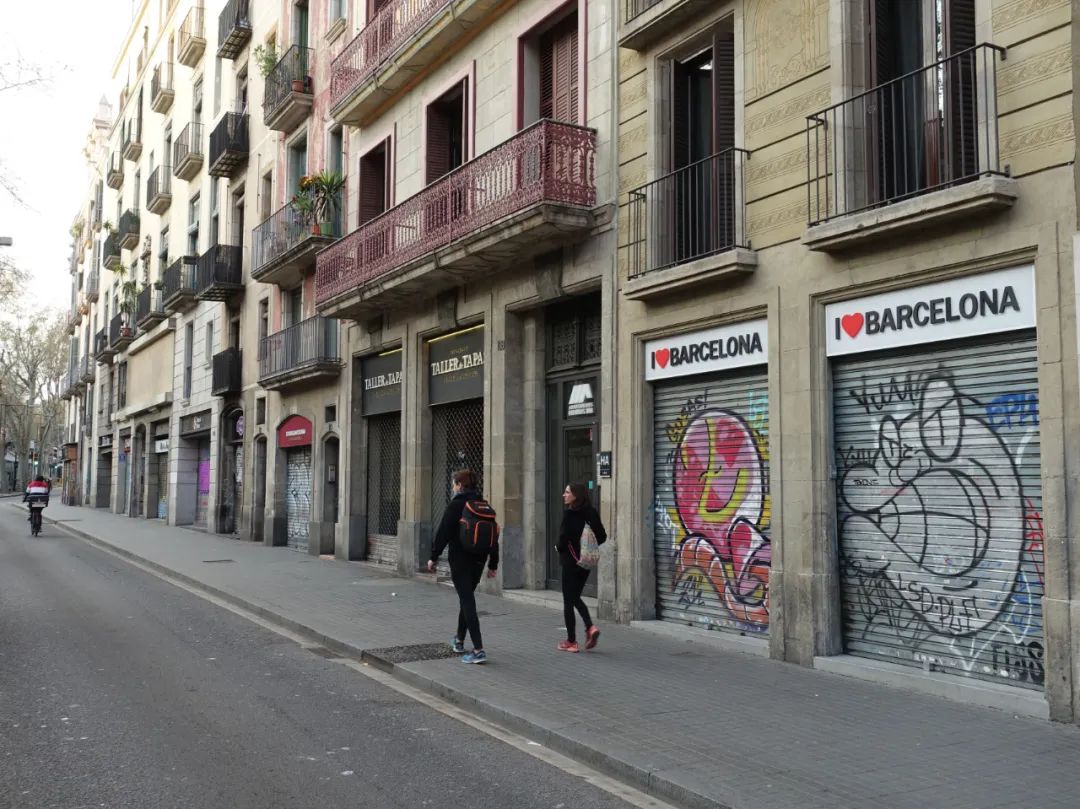 On March 14, the shops next to Ramblas in Barcelona, ​​Spain were closed and closed. Xinhua News Agency (photo by Zhou Yi)

The unemployment shadow caused by the has once again shrouded the Spaniard after the global financial crisis that just subsided a few years ago. According to an online survey of nearly 1,400 people, more than 50% of respondents are worried about losing their jobs because of the outbreak, and 60% think they will face pay cuts.

Faced with the current severe economic situation, Spanish Prime Minister Sanchez announced on the 17th that it would use 200 billion euros to alleviate the impact of the new crown epidemic on the economy. This amount reached 20% of Spain’s GDP. Sanchez acknowledged: “This is the largest economic resource mobilization in Spain since democratization.”

According to a series of measures announced by the Spanish government, 100 billion of the 200 billion euros of funds will be used to provide credit guarantees for companies to protect their fluidity. At the same time, 600 million euros will be used to guarantee the operation of social and public services in various autonomous regions, and some will provide assistance and loans to vulnerable groups. 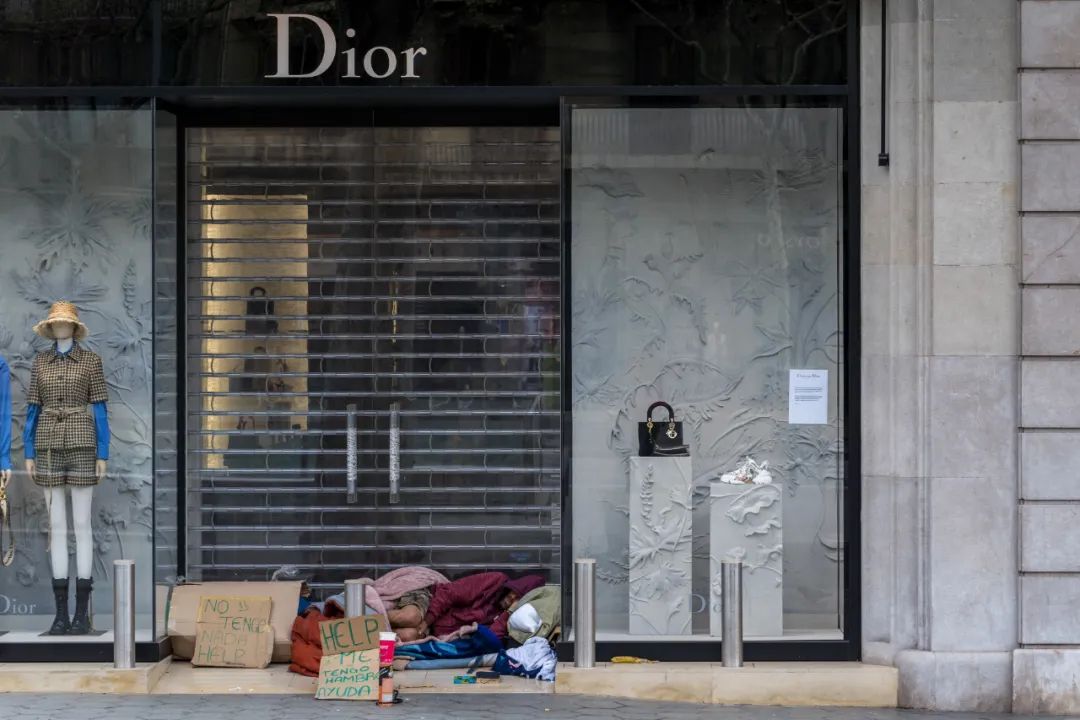 March 18, in Barcelona, ​​Spain, a man is lying in front of a closed shop. Xinhua News Agency (photo by Juan Gossa) The

government’s policy also includes allowing those who are in difficulty due to falling income to suspend payment of mortgages; simplifying the implementation of “temporary employment adjustment measures” to temporarily all income loss due to the epidemic The source population is entitled to unemployment benefits during this period, and does not include the consumption of the unemployment subsidy that accrues for accumulated contributions. 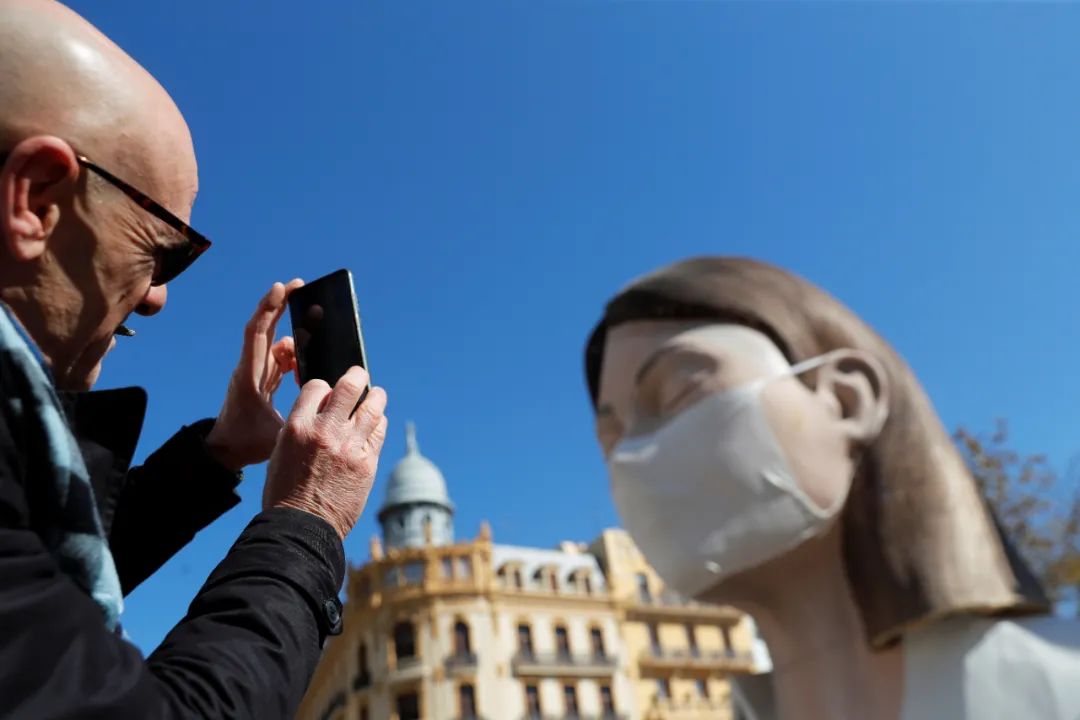 retained the Faiya doll. Xinhua News Agency / Reuters: In the

past years, after midnight on March 19, the dolls on the streets of Valencia had to be burned, and all the exquisiteness and beauty were reduced to ashes in the flame of carnival.

But this year, an exception was left here for a Faya doll. Government retained the giant bust of woman this is called “meditator” and place it in the center of Valencia’s Square, and it “wear” on a huge masks to remind people:

although Spring is here, but the epidemic is continuing.