Trump’s outbreak speech was exposed, and this detail made people angry!

According to CNN News, CNN was quoted as saying that the speech by US President Trump at the White House press conference on the 19th was taken by reporters. The photo shows that the “new crown virus” in the manuscript was crossed out and the handwriting was changed to “China virus”.

CNN said that with the increasing number of new crown virus infections in the United States, Trump began to change the door and tried to treat China as a scapegoat. 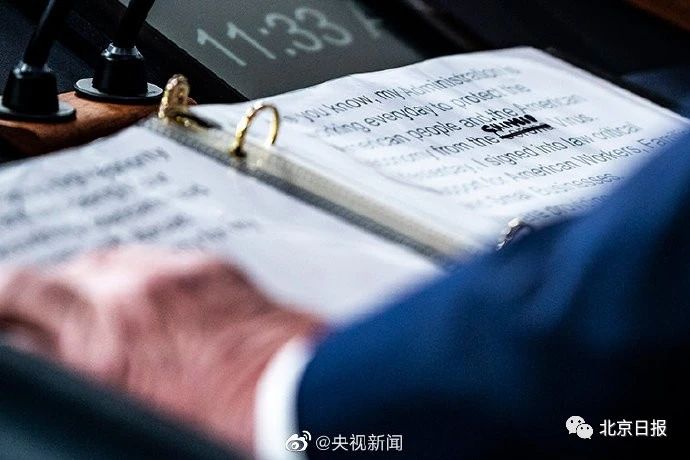 A Beijing Daily client reporter noticed that Trump has publicly replaced “coronavirus” with “Chinese Virus” as a racist term on social platforms and public places. 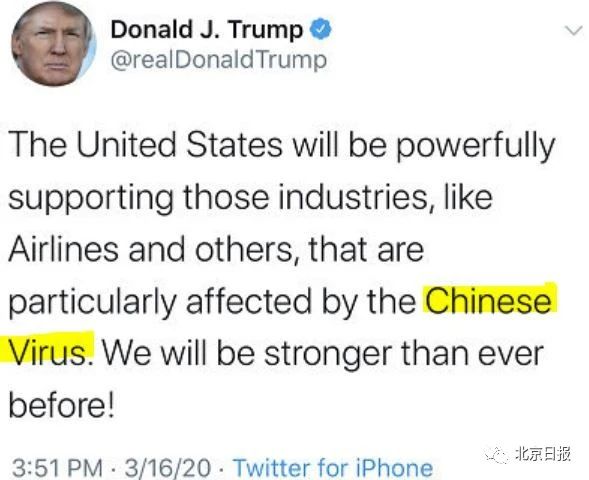 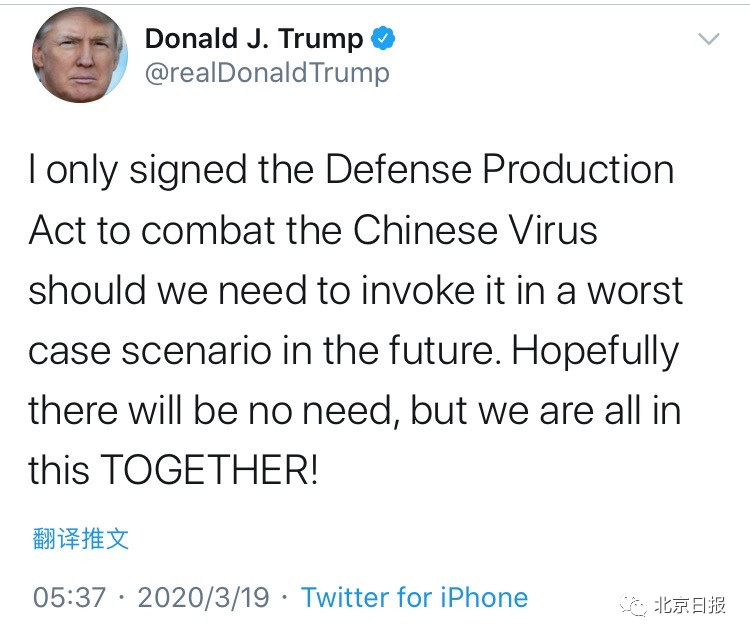 On the 18th, Trump’s old rival Hillary Clinton stepped forward, debunking Trump’s attempt to use such “racist” remarks to cover up his job dereliction of duty. She said: “The president is slipping towards racist remarks, trying to divert people’s attention, [covering] his failure to take the New Coronavirus seriously early, provide extensive testing, and be fully prepared for the United States to respond to the crisis. Don’t be fooled, don’t let you Friends and family are fooled. ” 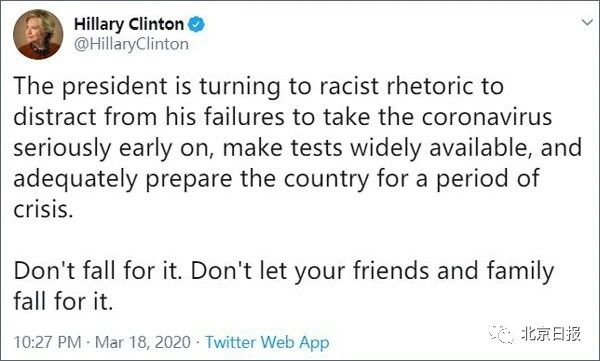 Trump’s approach has also been” outraged “by Chinese and foreign netizens. Many netizens believe that they passed the virus’s roots to China in order to cover up their poor anti-epidemic work. 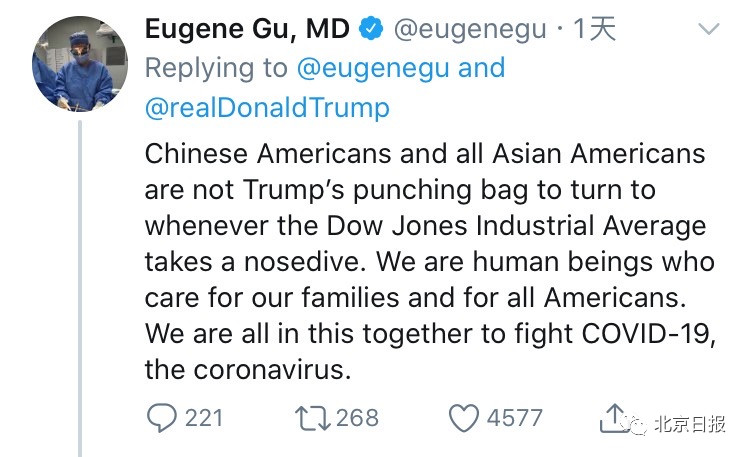 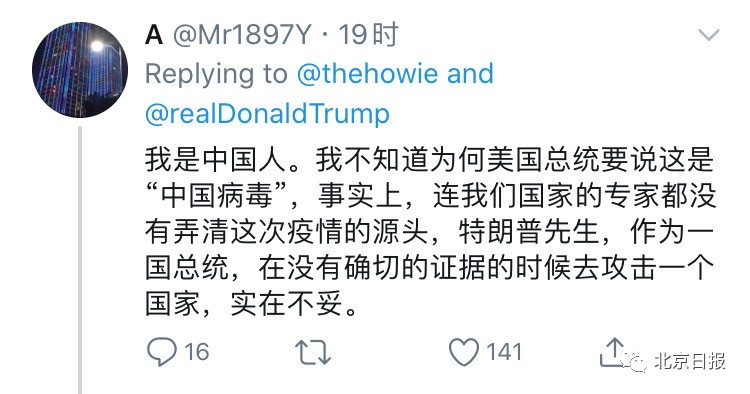 More netizens directly pointed out that this statement is suspected of racial or regional discrimination. 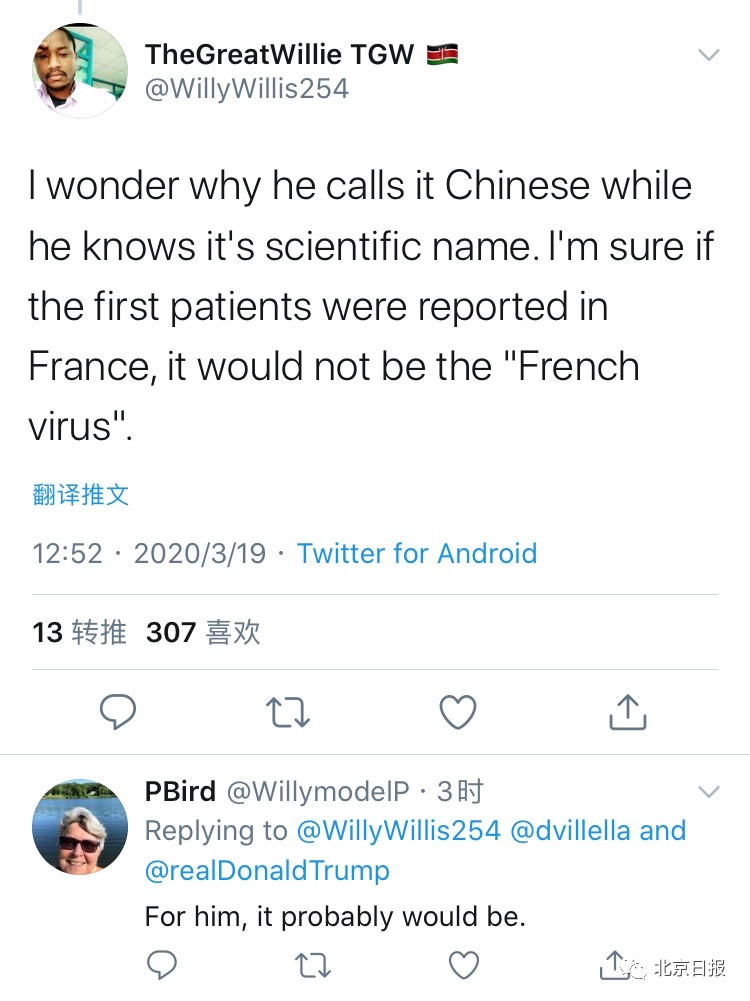 Many experts dismissed: It is

irresponsible to draw conclusions about the source of the virus. On the

18th local time, Michael Ryan, the head of the WHO health emergency project, dismissed Trump’s claim that the “new crown virus” is equivalent to “Chinese virus”. He said that the 2009 (H1N1) pandemic began in North America, and we did not call it the North American flu.

He emphasized that the virus has no borders and does not distinguish between race colour and wealth. It is necessary to unite to fight the virus together, rather than blame who.

The leader of the high-level expert group of the National Health and Medical Commission and the academician of the Chinese Academy of Engineering, Zhong Nanshan, also said that the source of the new crown virus can be clarified through the study of molecular biology and virus evolution, and the conclusion before this is irresponsible. of.

Wang Yi emphasized that individual countries attempted to stigmatize China’s fight against the epidemic. This act ignored the huge sacrifices made by the Chinese people to safeguard human health and safety, and slandered China’s major contribution to global public health security. China is firmly opposed to all actions that stigmatize the epidemic and target specific countries. The virus knows no borders, and the epidemic is the common enemy of mankind. It requires the international community to respond unitedly.

Wang Yi once again emphasized that China now adheres to the concept of a community of shared future for mankind and is providing different forms of anti-epidemic support to nearly 100 countries, including assistance for urgently needed medical supplies, sharing of prevention and control experience, and dispatching expert teams. Unfortunately, individual countries have attempted to politicize the epidemic, label the virus, and stigmatize China. Such acts are not conducive to the solidarity of the international community, and also seriously prevent countries from working together to respond to the epidemic. They must be resolutely and explicitly resisted and opposed. 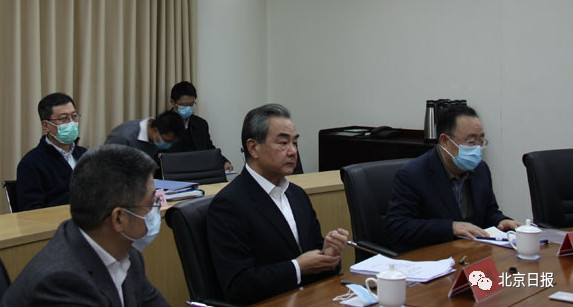 the nation’s total of 13,350 cases diagnosed

at Johns Hopkins University published a new confirmed cases of pneumonia, according to crown The real-time query system, as of 6 pm EST on March 19, has reported a total of 13,350 confirmed cases of new coronary pneumonia, 188 deaths, and 106 cured nationwide. In less than 18 hours on the 19th, 3,899 new cases were diagnosed in the United States.

According to CCTV news client news, California Governor Gavin Newsom announced the “home isolation order” on the evening of the 19th, requiring 40 million residents in the state to stay at home and not go out to prevent the spread of the new crown pneumonia epidemic.

Previously, many cities, including Los Angeles, had required residents not to leave the shelter in place unless it was a necessary post or had to go out to purchase. California is the most populous state in the United States and the number one state in terms of total US GDP. 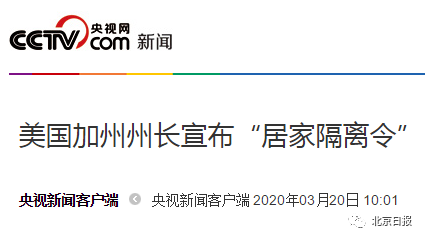 The face of the epidemic spread so rapidly

with its rush to pass the buck to China