Three weeks ago, senior US officials warned privately of the new crown “comparable to the 1918 flu” and sold stocks

Home Health Three weeks ago, senior US officials warned privately of the new crown “comparable to the 1918 flu” and sold stocks
Health
March 20, 2020March 20, 2020By daydayhub
0

[Global Network Reporter Li Dongyao] “What I can tell you about this is that it (the new crown virus) is more aggressive in spreading than anything we have seen in recent history.” “Compared to 1918 The pandemic. “At present, the new crown pneumonia epidemic in the United States is spreading at a rate of more than a thousand new cases, but the above warning, Richard Burr, chairman of the United States Senate Intelligence Committee, as early as February 27-also It was early in the epidemic.

“It was fortunate” to hear a senior Senate Republican official warn, but a group of entrepreneurs or his political donors. At that time, there were only 15 cases in the United States, and the Trump administration was still trying to eliminate people’s “fear” in front of the camera, suggesting that the virus may be seasonal. The US media mentioned that Burr himself had sold a lot of stocks in the weeks before the US stock market plummeted due to the outbreak. 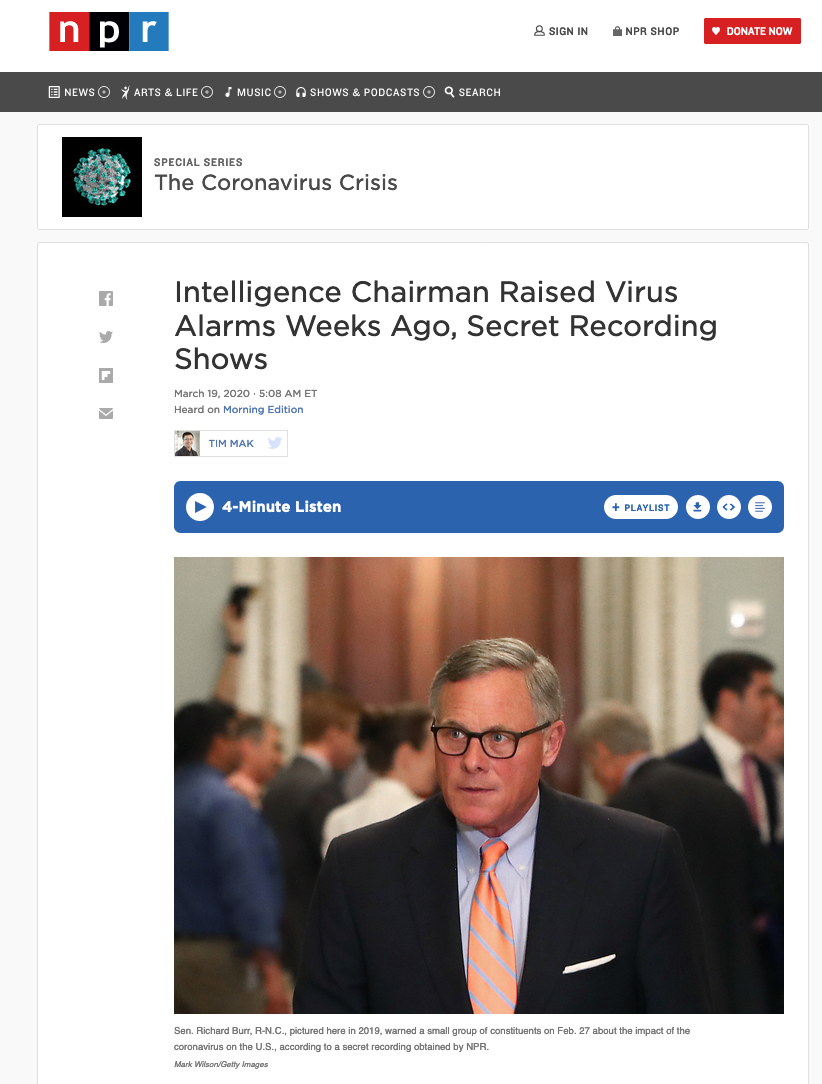 On the 19th local time, the US National Public Radio (NPR) released an exclusive report which revealed a secret recording showing the above details. According to reports, the recording comes from a speech by a Republican Sen. Richard Burr, the chairman of the Senate Intelligence Committee, at a private lunch on February 27.

The NPR report mentioned that Burr’s message that day was terrifying and even more worrying.

According to reports, Burr said on the same day, “What I can tell you about this is that it (new crown virus) is more aggressive in spreading than anything we have seen in modern history.” He also said, ” This may be more similar to the pandemic of ”

Burr said, “Every company should be aware that you may have to change your travel (planning). You may need to pay attention to your employees to determine whether their trip to Europe is necessary or whether it can be done through video conferencing. “Why take this risk?” The

report also mentioned that 16 days before North Carolina announced the closure of the school due to the threat of a new crown pneumonia epidemic, Burr gave a judgment at the time that the school might need to be closed, “I believe When the community, which may be some in North Carolina, spread, they would say, “Let ’s close the school for two weeks, and everyone will stay home.”

In addition, Burr also mentioned the possibility of mobilizing the army to respond to the epidemic Sex. “We will deploy a military hospital, put up tents, and build them outdoors.” “This will be a decision made by the President and the Department of Defense. We will have medical professionals and local staff to serve those in need of treatment.”

NPR states that Burr’s luncheon was organized by a group called “Tar Heel Circle” (members of the North Carolina state), which includes North Carolina businesses and People from multiple organizations. Joining the group requires a membership fee of $ 500 to $ 10,000. According to the group’s website, members can “interact with senior leaders and employees in Congress, government, and the private sector.”

According to a copy of the invitation list obtained by NPR, dozens of guests from North Carolina businesses and organizations were invited to attend. According to federal records, these companies, or their political agencies, donated more than $ 100,000 to Burr’s campaign in 2015 and 2016.

As of now, many US media, including the “Politician” News Network and the “Rolling Stone” magazine website, have cited the aforementioned recordings disclosed by NPR for reporting. These media all believe that Burr’s previous statement made at the end of February was completely different from what the then Trump administration disclosed to the people (muchdifferent). 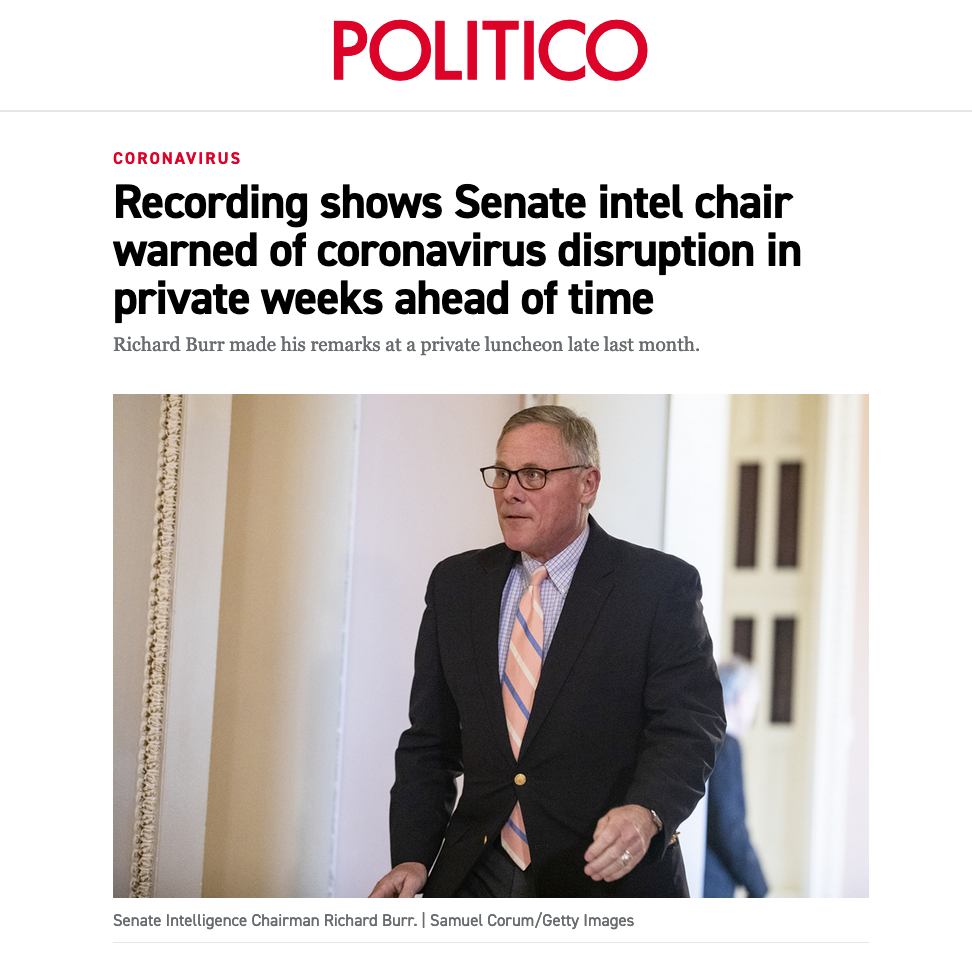 The NPR mentioned that there were only 15 cases in the United States at that time (as of February 27), and the Trump administration was still trying to eliminate people’s “fear” in front of the camera, suggesting that the virus may be seasonal. “It will disappear. One day, it will be like a miracle (disappear). He will disappear.” Trump said at the time, “Before things get better, it can get worse. (But ) It may disappear, let’s see what happens next. ”

NPR said that Burr’s office has not yet directly responded to a series of questions he asked about the recording. The statement provided by his spokesperson, Caitlin Carroll, only emphasized Burr’s interest in public health preparations over the years.

A scholar at Harvard Medical School, Jason Silverstein, said, “At the end of February, there may be such wording that we should expect this to happen. You know, this is not to panic, but it will Prepare everyone. ”

The RollingStone magazine website wrote on the 19th:” Thursday (19th), we learned that the chairman of the intelligence committee means (to the outside world) confidentiality, only told his state’s elite and their (political) donors – which have a problem, why Burr feel the need to know what their secret. ” ” 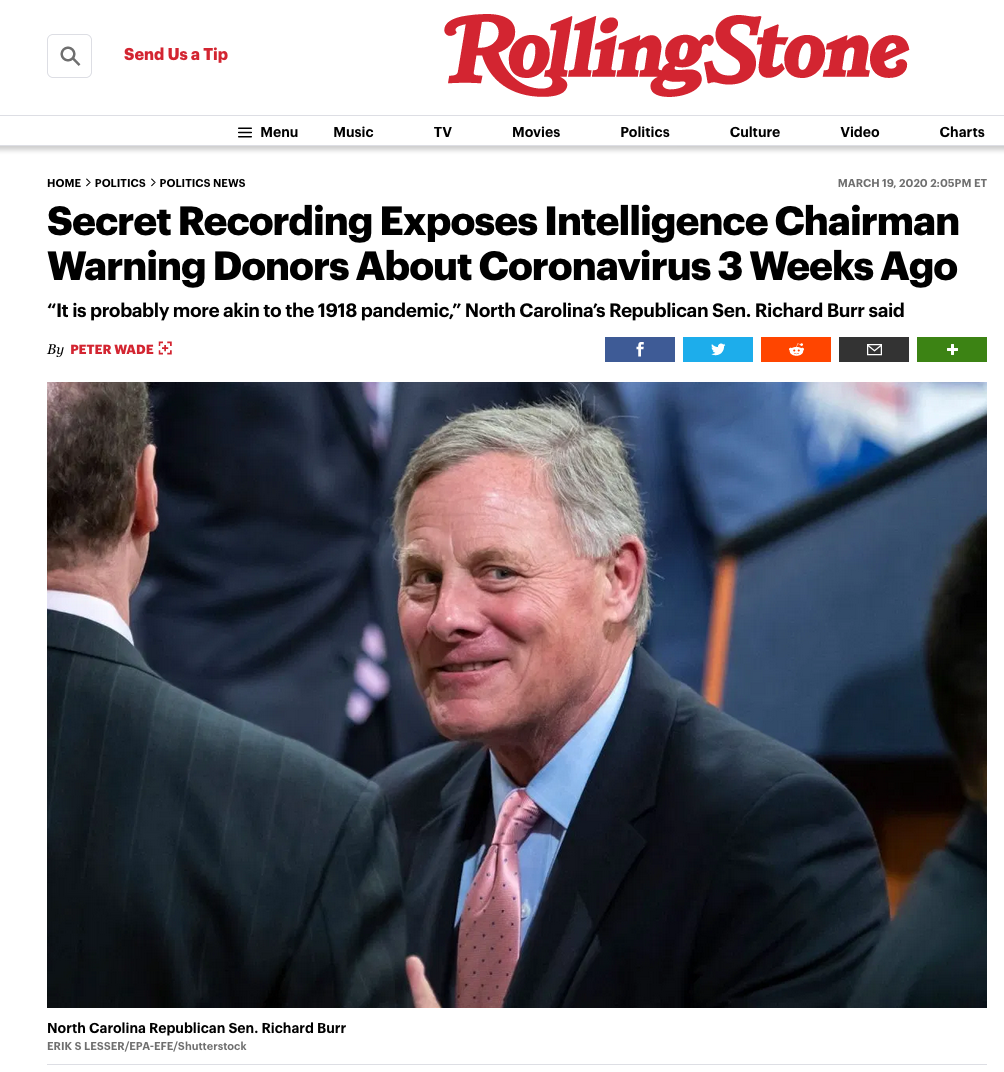 due “to initiate Trump The fear of dissatisfaction is stronger than the desire to save American lives? “The article asked.

“Politician” News Network on the 19th also mentioned an interesting detail. According to the report, ProPublica, an investigative news media in the United States, mentioned that Burr had sold shares worth 580,000 to 1.6 million US dollars in the weeks before the U.S. stock market began to plummet due to the new crown pneumonia epidemic. “Politician” News Network said that this may avoid severe financial suffering for Burr.

On the same day, Rep. Alexandria Ocasio-Cortez, a Democrat, bombarded Burr on Twitter. “As the chairman of the intelligence committee, Burr got the new crown virus a few weeks ago. Private briefing. Burr knew how bad things could be. He told the truth to his wealthy donors while assuring the public that we were safe. Then he sold $ 1.6 million worth of stock before the stock market fell. “He needs to resign.” 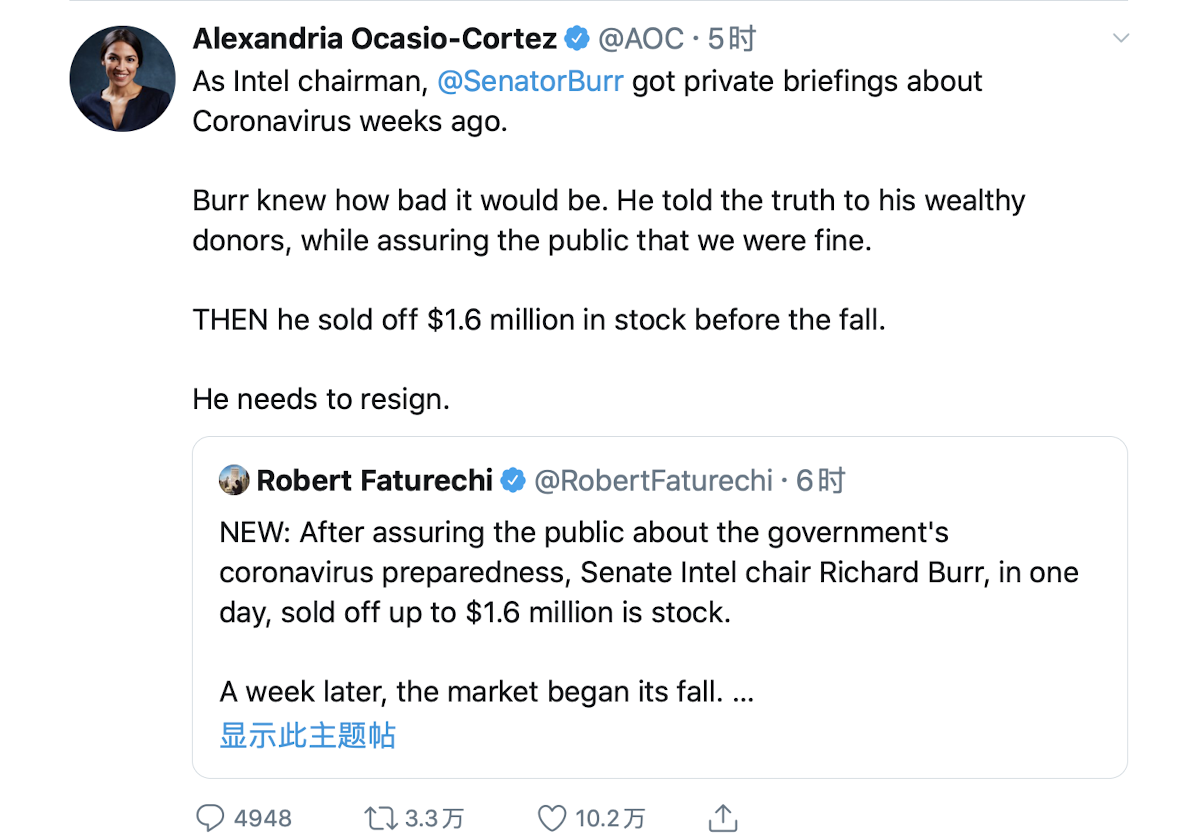 In response, Burr’s spokesman explained that Burr’s sale of shares was made long before the market began to show signs of tension.