German customs seizes masks and protective clothing from 3M company in the US: products should have been exported to the US and Switzerland

Home Health German customs seizes masks and protective clothing from 3M company in the US: products should have been exported to the US and Switzerland
Health
March 20, 2020March 20, 2020By daydayhub
0

Original title: German customs seized the US company 3M masks and protective clothing: This product should be exported to the US and Switzerland,

according to the “Rhine Post” Local 19 reported that the German customs confiscated recently that the United States 3M Group Singshih (Jüchen) European Distribution Center A batch of protective supplies, including high-grade masks and protective clothing used in medical, laboratory and chemical production, and civilian masks, and suspected that the goods were used for illegal export.

Both the German Federal Customs Administration and the 3M Group confirmed the seizure. A spokesman for the Krefeld Customs Office in Germany said: “Customs officers at the 3M Group factory inspect the export goods for compliance with the law. All other matters must comply with tax confidentiality requirements. A 3M Group spokeswoman said:” Today, the customs at Mönchengladbach inspected a batch of goods registered for export to Switzerland at our European distribution centre in Jüchen. The spokesman said that according to the customs department, the inspection was related to the current restrictions on the export of medical protective equipment in Germany.

Sources from the security department confirmed to the “Rhein Post” that several batches of protection were seized and sealed during the inspection. These products were supposed to be exported to Switzerland and the United States. Sources said that “several truckloads of goods intended to be exported illegally were found.”

Due to the crisis of the new crown pneumonia epidemic, medical equipment exports from the European Union are currently only allowed under special circumstances. According to the federal government, protective equipment can only be exported if the major needs of Germany are met. The lack of protective equipment in other countries can endanger human life, which still applies. 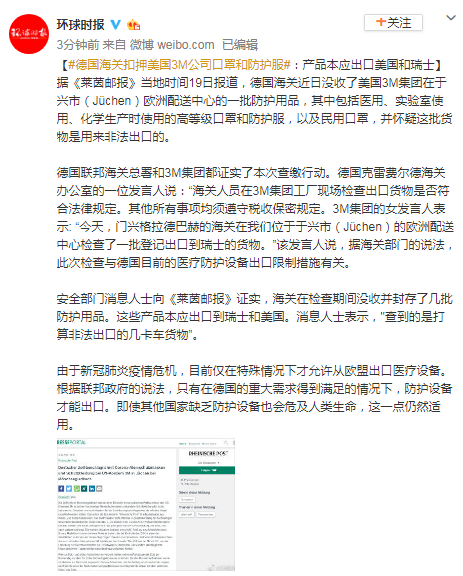