Original title: ridiculous! U.S. lawmakers have begun to calculate the US debt held by China.

[Text / Observer Wang Kaiwen] In the face of new crown pneumonia, the US government has been slow to respond and inadequately prepared. However, Trump ignored the fact that his resistance to the epidemic was weak, and attempted to “flew the pot” in China to deal with the turbulent public opinion in the country, and even blatantly said “the Chinese virus.”

The upper beam is not the lower beam, and on March 16, an U.S. congressman with Trump ’s party also bluntly declared that he wanted China to “pay for” the U.S. epidemic. As a result, he also held up Chinese holdings. The idea of ​​US debt.

The above remarks came from Fox’s “Tuck Carlson Tonight” program on the evening of the 16th. Host Tucker Carlson connected with Indiana Republican Rep. Jim Banks to discuss the so-called “Is China responsible for the new crown virus?” 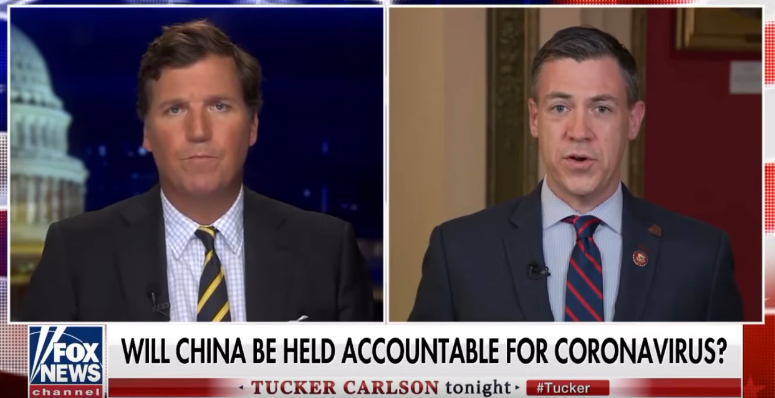 Banks stated: “We need to force China to the United States branch Fuxin Guan virus The burden and costs that come with it, I think we have a lot of ways to do that. For example, the president can force China to forgive a large portion of US debt … ”

Asked whether he thought Trump was willing to do so, Banks He replied: “I hope so.”

In addition, he also expressed the hope that the new crown epidemic would prompt the US Congress to move key supply chains including pharmaceutical manufacturing back to the United States.

The former US congressman declared that the two major health care systems, the United States Department of Veterans Affairs (VA) and the Department of Defense (DOD), should be prevented from purchasing medical equipment from China. “We can begin to liberate from the Chinese economy, and Accountable to them. ”

Coincidentally, just as Banks was playing with the idea of ​​US debt, the US Treasury Department on the 16th local time also released the latest data on the holding of US debt in major countries and regions around the world in January this year.

The latest data show that in January of this year, China increased its US Treasury bonds by 8.7 billion U.S. dollars, bringing its debt holdings to 1.0786 trillion U.S. dollars. This is also China’s first increase in holdings since June last year.

Monthly scale of U.S. bonds held by major countries from January 2019 to January 2020

As for Fox News, it has long been inferior in reporting the new crown epidemic. Tucker Carlson himself once referred to the “new coronavirus” as “Chinese coronavirus”. On March 2nd, another Fox host Jesse Watters falsely described the virus as “originating in China” on the show and also “formally apologized to the Chinese side.”

Foreign Ministry spokesman Zhao Lijian responded to this ridiculous speech at a regular press conference, which fully exposed his arrogance, prejudice, and ignorance of China.

Zhao Lijian said that the “Chinese apology” is groundless and unjustified. Where the virus originates is inconclusive. No matter where the virus originates, China, like other countries with outbreaks, is the victim of the virus and faces the challenge of spreading the epidemic. In 2009, the U.S. outbreak of H1N1 flu spread to 214 countries and regions. Who asked the United States to apologize?