Home Health The first case of new coronavirus infection appeared in the US Centers for Disease Control and Prevention
Health
March 17, 2020March 17, 2020By daydayhub
0 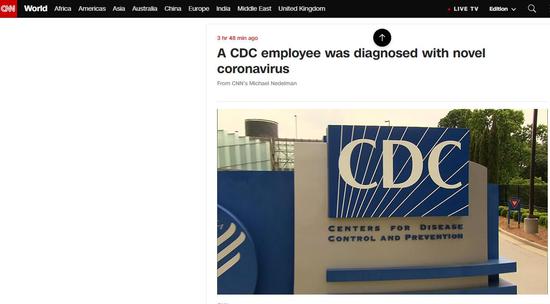 According to a report, according to a statement, the US Centers for Disease Control and Prevention announced that the employee was infected with the new crown virus, the first infected person in the institution. However, the Centers for Disease Control and Prevention the staff who tested positive for the new crown virus was “in good condition and quarantined to prevent transmission of other people.”

said that CNN said that the agency made it clear that the staff was not involved in the response. He has not been in the office since March 6, and he had no symptoms at the time. The statement added that other employees in the same unit are working remotely and their offices are undergoing intensive cleanup.

The Centers for Disease Control and Prevention said that they would not disclose further details about this case or other subsequent cases for privacy reasons.

On March 9th, Nancy Messoniye, director of the National Center for Immunity and Respiratory Diseases of the US Centers for Disease Control and Prevention, told reporters that “so far, more than 1,500 people involved in this (outbreak) response work”, no one Infected with new crown virus.