According to Bloomberg News, North Korea ’s top leader Kim Jong-un announced that North Korea has defeated the new crown pneumonia epidemic and no one is infected. In January, to prevent the epidemic from spreading, North Korea closed its borders while also suspending legal trade and tourism. On Friday, General Robert Abrams, commander of the US Army in South Korea, told reporters that North Korea ’s military operations have significantly decreased in the last 30 days, and daily military training has only recently resumed. Based on this, the United States speculates that there should be a confirmed case of new coronary pneumonia in North Korea. Despite the epidemic’s control, it is difficult for the virus to cross national borders. However, a large number of militarized borders and black market traders are still likely to become carriers of the virus, thereby allowing the new crown pneumonia virus to enter North Korea from China. According to the World Health Organization, at least 225 Chinese people entered North Korea from Liaoning and Jilin last week. To date, 5,400 North Koreans have been discharged from hospital and have not been infected. Professor of International Medicine at Korea University suspects that North Korea has concealed the true situation of the epidemic and believes that there should be confirmed cases in North Korea. 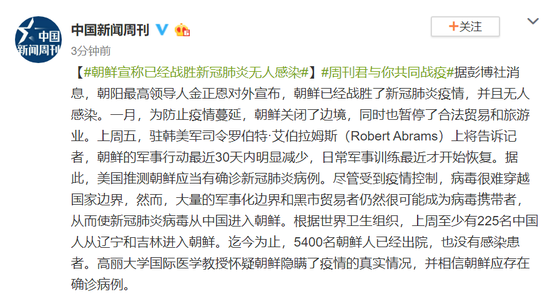