American man rushed into the US media live broadcast scolding: your fault, you conceal the truth, China did everything right

Home Health American man rushed into the US media live broadcast scolding: your fault, you conceal the truth, China did everything right
Health
March 16, 2020March 16, 2020By daydayhub
0

Original title: American man rushed into the US media live broadcast and scolded: Your fault, you concealed the truth, China did everything right

Recently, a video spread on American social media: At 5 am, American media was in a large department store A live broadcast of people grabbing shopping funds outside the door, a passing man suddenly grabbed the camera and yelled that it was precisely the media hype that caused the public to panic. He also stated that he did not blame China at all and that everything China did was correct. It can be seen from the video that when the host just finished a report, an American man passing by in the distance suddenly came forward and rebuked, it was your fault, and people panicked. He also said, “Do you know, I don’t blame China, at all, everything they do is right, you are here to hide the truth. Goodbye, good morning to you.” 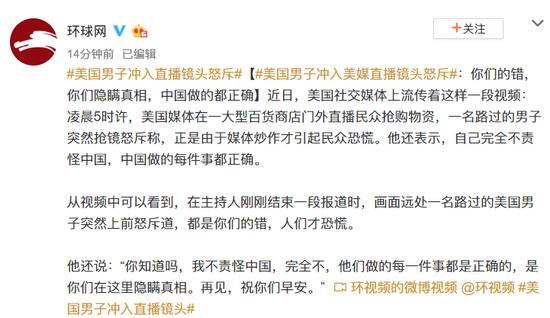 News, USA
Previous PostOn the material donated by Ma Yun to Italy, he wrote a lyrics of “Turandot”!Next PostMs. Li, who returned to the United States for medical treatment, has more questions …