US media: Trump people are calm before and calm, afraid of being infected

Home Health US media: Trump people are calm before and calm, afraid of being infected
Health
March 13, 2020March 13, 2020By daydayhub
0 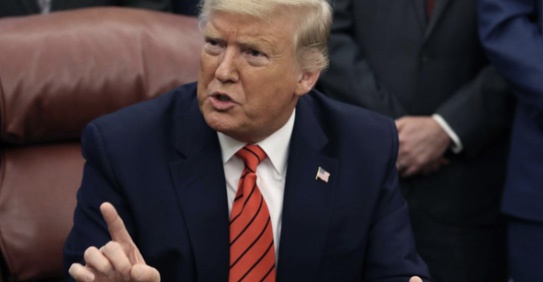 US President Trump is one of the few people who openly dismiss the new crown epidemic: Even with such severe measures as announcing a travel ban in Europe, one cannot help but add the phrase “the risk is actually very low.”

However, this may be a superficial phenomenon, and different sources show that the president, who has a serious cleanliness and calls himself a “phobic bacteria”, is actually very afraid of contracting the new crown virus in private. The reason why he insisted on diluting the risk of the epidemic in public is partly because he feared that the panic would affect the economy and would slow down his re-election.

Trump is pursuing his next four-year term, and a strong economy is his capital to compete with Democratic candidates. With the outbreak of new crown pneumonia in the United States, Trump is under increasing pressure.

Someone said it was okay, and privately was afraid that

Trump’s attitude towards the new crown virus would run counter to the public and media’s views from the beginning. Although the number of confirmed diagnoses has risen rapidly over the past few weeks, and public health experts have repeatedly warned, Trump has repeatedly stated that he need not worry about this.

Even with the new crown virus entering Washington and approaching the White House, Trump still looks very “calm” on the surface.

At least five members of Congress have isolated themselves this week for having had close contact with a confirmed person while attending the Conservative Political Action Conference (CPAC) at the end of last month, including Trump ’s newly appointed White House Chief of Staff Mark May Dos.

Trump also participated in the event, but was reportedly not in direct contact with the diagnosed. However, two of the five self-segregated lawmakers have recently had close contact with Trump. One of them also traveled with Trump on Air Force One.

Although the outside world is very concerned about whether Trump will be infected and House Speaker Pelosi calls for Trump to be tested, the White House insists that Trump is in excellent health and does not need to be tested for viruses. When asked about the situation, Trump said on the 7th, “I’m not scared at all.”

The report also quoted a source as saying that Trump had told an aide last week that he was concerned that a reporter intentionally transmitted the New Crown virus to “Air Force One” and infected him. To this end, Trump not only asked the Secret Service to develop a screening plan, but also banned anyone with symptoms of coughing from entering the White House.

Trump rumored to deny this, and a White House spokesperson also used Trump’s claims to call it outright “fake news.”

However, according to CNN 13, a source close to Trump also reported that Trump was indeed very worried. The source said Trump was worried about his close confession that he was indeed concerned about contact with people infected with the new crown virus, including Brazilian officials who were diagnosed with the infection after returning to the United States on a recent visit. “He is worried about everyone he sees, including Brazilians,” the source said.

Brazilian President Bossonaro visited the United States a few days ago and met with Trump. A Brazilian press officer on the same scene returned to the country and confirmed the diagnosis of new coronary pneumonia. However, Trump still stressed on the 12th that he was not worried about his health, claiming that he just sat next to him for a short while.

Trump’s private fear of the new crown virus is not surprising. Many people around Trump have long confirmed that he has been a serious cleansing fetish, and Trump has publicly declared himself a “phobic bacteria” many years ago.

US media have previously disclosed that Trump is particularly fond of hand-washing. He usually avoids shaking hands with people after speeches and meetings, even if the handshake is immediately disinfected with hand sanitizer. He would even ask visitors to the White House to wash their hands in the bathroom of the adjacent oval office. He hates seeing sick people appear in front of him, and if an assistant coughs and sneezes in front of him, he will be quickly driven away.

In fact, according to Rep. Matt Gaetz, who has been self-segregated, Trump has recently taken some precautionary measures, including frequent use of hand sanitizers.

The Washington Post said in a report on Monday (9th) that Trump ’s White House doctor Sean Conley recently started attending certain White House meetings It used to be more frequent, and people with flu-like symptoms were asked not to enter the White House because they “may infect the leaders of the free world.”

The road to re-election meets the “black swan”

The Vanity Fair article analyzes Trump’s response to the epidemic and argues that Trump has in fact treated a public health crisis as a media war. A White House official said, “He (Trump) is trying to control the narrative beyond his control.” The

article states that the epidemic crisis is in line with Trump’s long-established worldview that the media is always collecting stories to bring down he. The New Crown epidemic is one such example. Trump has chosen the response he is familiar with-he refers to media coverage of the epidemic as “fake news.”

Another more important reason may be his concern about the economic impact of panic. Trump is keen to brag about his economic achievements, which is the key to his reelection in the November election. In order to be re-elected, the president, who has serious fetishism, would rather choose to understate the outbreak.

The British Broadcasting Corporation (BBC) pointed out in a recent article that the support rate and stock market data are the things that Trump has always paid attention to and keeps an eye on. Trump predicts that if the stock market soars, his approval rating will rise, and he will be re-elected in November this year. He took the tweet to boost the market almost every four days after taking office.

According to the New York Times, from the beginning the White House has been divided over how much truth should be disclosed to the public. Although U.S. health officials have issued early warnings and urged the White House to take steps, Trump fears disrupting financial markets and causing panic.

Because of Trump’s pressure, many White House officials were afraid to express a view that contradicted him because of fear of angering Trump. Secretary of Defense Esper also warned the military not to make decisions that conflict with the message conveyed by President Trump.

Last month, US health officials worried about the epidemic took advantage of Trump ’s opportunity to fly back from India to the United States to warn that the spread of the new crown virus in American communities was inevitable, and the news quickly caused the US stock market to plummet. According to the New York Times, Trump was furious when he heard the news. As soon as he got off the plane, he called Health Minister Hazard to question, accusing the warning of scaring people.

But everything Trump does seems to be counterproductive.

He told the public not to worry that the epidemic would pass, but the number of confirmed cases in the United States is growing faster; he said that the United States was well prepared, and Vice President Pence turned his face and admitted that the kit was simply not enough. Republicans close to the White House say his optimistic estimates are fundamentally divorced from reality, leading to a worsening of the epidemic.

As a result, the epidemic did not end as quickly as Trump thought, and the stock market failed to stop the decline. Americans are increasingly dissatisfied with Trump’s way of handling the epidemic. In fact, some American media have accused Lamp is the biggest obstacle to controlling the epidemic.

Originally, Trump had the advantage in this year’s election, but the epidemic filled his re-election path with uncertainty. The Washington Post reported that White House officials are increasingly concerned that the rapidly spreading outbreak is a “black swan incident” that has affected Trump’s search for re-election.