Original title: Pompeo has left China after the epidemic prevention, and the American people have replied: Liar

Pompeo: It is “incredibly frustrating” to cooperate with China to obtain data on the new crown virus, which has left the United States behind in epidemic prevention.

According to statistics released by the Centers for Disease Control and Prevention and public health departments of various states, as of 6 pm local time on the 7th local time, a total of 445 positive cases of new coronary pneumonia and 19 deaths were reported in the United States. On the 7th, 95 newly diagnosed cases and 5 death cases were added.

Governor Chang’an Street noticed that the epidemic was so severe that the Trump administration was accused of inadequate response to the epidemic in the United States. At this time, US Secretary of State Pompeo dumped the “pot” to China.

On the 6th, Pompeo said in an interview with the US Consumer News and Business Channel (CNBC) that working with China to obtain data on the new crown virus was “incredibly frustrating”, which made the United States “lagging behind” in epidemic prevention. .

It is not surprising that Pompeo is so black in China, but his point is really amazing.

China’s achievements in combating the epidemic and sharing of experience are universally recognized.

As early as February 27 in the Xinhua News Agency report, the chief scientist of the World Health Organization, Sumiya Swaminathan, said in an exclusive interview that China’s openness and transparency in sharing relevant data and samples of New Coronary Pneumonia are commendable .

A survey report recently released by the China-WHO joint expert inspection team pointed out that China has taken the bravest, most flexible and most proactive prevention and control measures in history, successfully avoided or at least prevented 100,000 cases, and established prevention A strong first line of defense for the international spread of disease.

On the 6th, the international medical journal “The Lancet” published the latest editorial that pointed out that although other countries do not have the same level of political and economic command as China, politicians from various countries can learn from China’s experience.

The Governor of Chang’an Street previously reported that the US Centers for Disease Control and Prevention announced that it would not announce the number of people tested nationwide and the number of people who tested negative; the first-line doctors in the United States complained that they did not have rapid testing reagents at hand, and even “pleaded” the health department to test suspect patients; “Vice President Burns, who dealt with the outbreak, publicly acknowledged that the existing tests were inadequate. Plenty of facts lay in front of him, making Pompeo’s “shake pot” very ridiculous, not worth refuting.

Sure enough, once Pompeo’s remarks came out, even the Americans couldn’t stand it anymore.

In CNBC’s Twitter message, many netizens accused Pompeo of being a “liar,” and others said, “If you fail to dress up, you have played a game of shirk!”

Not only that, the domestic chaos in the United States has also been widely criticized.

Despite Pence’s demand for a “unified caliber”, conflicting and sometimes misleading statements by senior US officials have become even more confusing. For example, the problem of testing reagents. The day after Vice President Pence acknowledged the “shortage,” the US Secretary of Health and Human Services Alex Azar insisted that “there is no shortage of testing equipment and there has never been a shortage.”

Right now, the states most affected by the epidemic, Washington, California, and New York, have all declared states of emergency. The situation for the Supreme Princess cruise ship outside the San Francisco Bay of California is also less optimistic. The cruise ship carried about 2,500 passengers and 1,100 crew members. Of the 46 people currently on board, 21 were confirmed.

Many U.S. health experts are concerned that there may be many undetected cases of the infection in the United States because of the poor detection in the previous stage.

Howard Foreman, a Yale professor and medical management expert, even told Business Insider that it’s not impossible that 100,000 people are infected in the United States.

Under these circumstances, anti-China politicians, represented by Pompeo, are trying to make China “backfire” for the epidemic, which is obviously a joke. Pompeo’s remarks are reminiscent of what he concluded last year when he was in charge of the Central Intelligence Agency (CIA)-“We lie, we deceive, we steal. We have a course dedicated to teaching these. This is what the U.S. continues to do. Explore progressive glory. ” 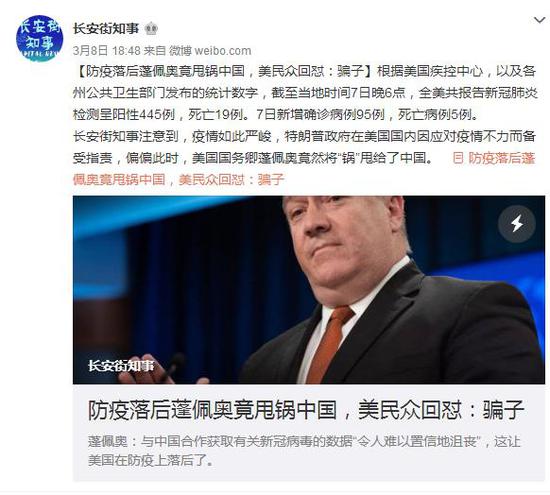