Italy in a “citadel”: open-air cafes filled with riots in many prisons

Home Health Italy in a “citadel”: open-air cafes filled with riots in many prisons
Health, Politics
March 9, 2020March 9, 2020By daydayhub
0

Original title: Italy in the “capped city”: riots in many open-air cafes filled with prisons

According to Xinhua News Agency, on March 8th, local time, the Italian government announced that from that day until April 3rd, Lombardy North In the region and another 14 provinces, about 16 million people have adopted closed quarantine measures.

What is uncertain, however, is the extent to which the government’s isolation measures will limit people’s activities in the quarantine zone, and the Italians do not seem to know how to deal with the situation and life in isolation. 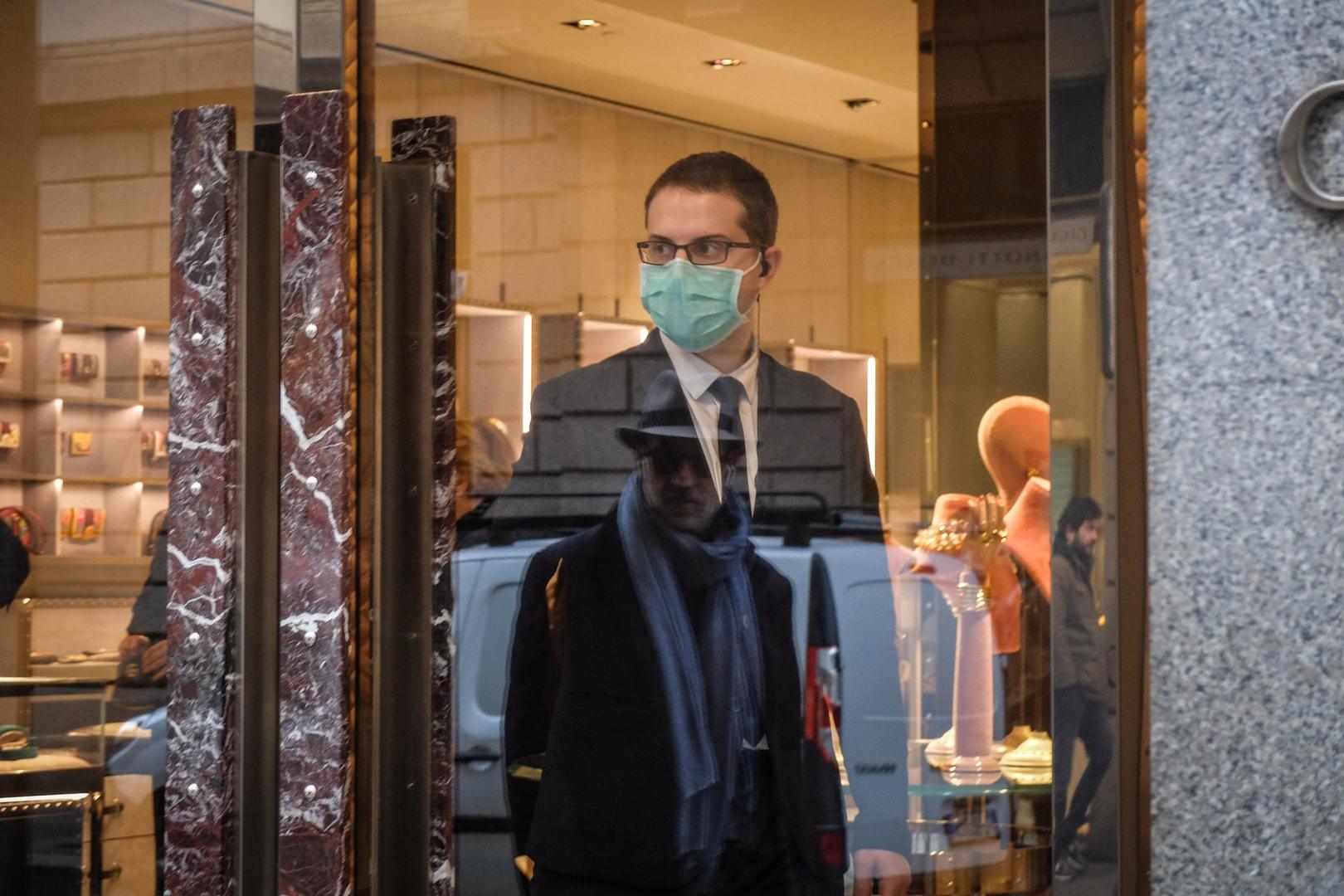 ▲ On March 7, local time, a luxury store employee in Milan wore a mask. According to the EPA on the

Outside the blockade, riots and riots broke out in Italian prisons due to isolation measures, killing one prisoner and injuring many others.

Outdoor venues are still crowded with

“this beautiful weather, you can’t stay at home”

on the evening of the 7th local time. After hearing the wind of the Italian government’s “cities closure” upgrade, some people decided to immediately “flee” Milan. Others who could have left, however, decided to stay.

“I don’t think it’s irresponsible to leave this area,” said Ludovica Atolico, a Roman who works in Milan’s luxury industry. “How do I know I don’t carry the virus? I will do as the government says. Even if I’m fine and have no symptoms, I don’t want to risk spreading the virus to others, especially my family. ” 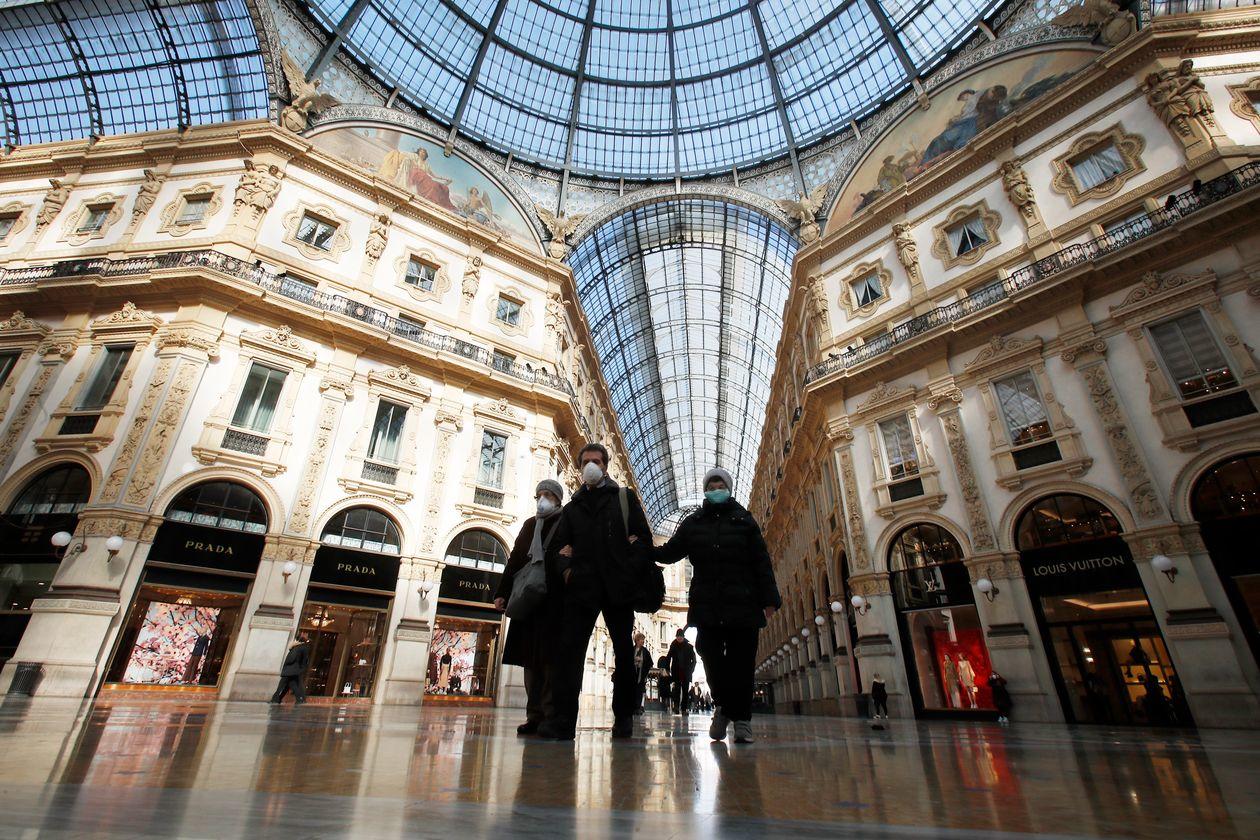 according to the Wall Street Journal, on the 8th local time, the first day of the decree’s entry into force, despite the bustling life in the central square in front of the cathedral, it was still crowded. Many of Milan’s shopping malls and business districts are nowhere to be found, but there are still many people walking, cycling and running in city parks and riverside walks.

Many open-air cafes along the river are full of people, but in order to comply with the new rules of maintaining a one-meter distance, the distance between the tables is longer than usual. “Everyone feels relaxed, I’m not surprised, because I don’t think people fully understand the decree,” said Beatrice Fumagalli on a bicycle through Cathedral Square. “You can’t stay in such beautiful weather At home. ” 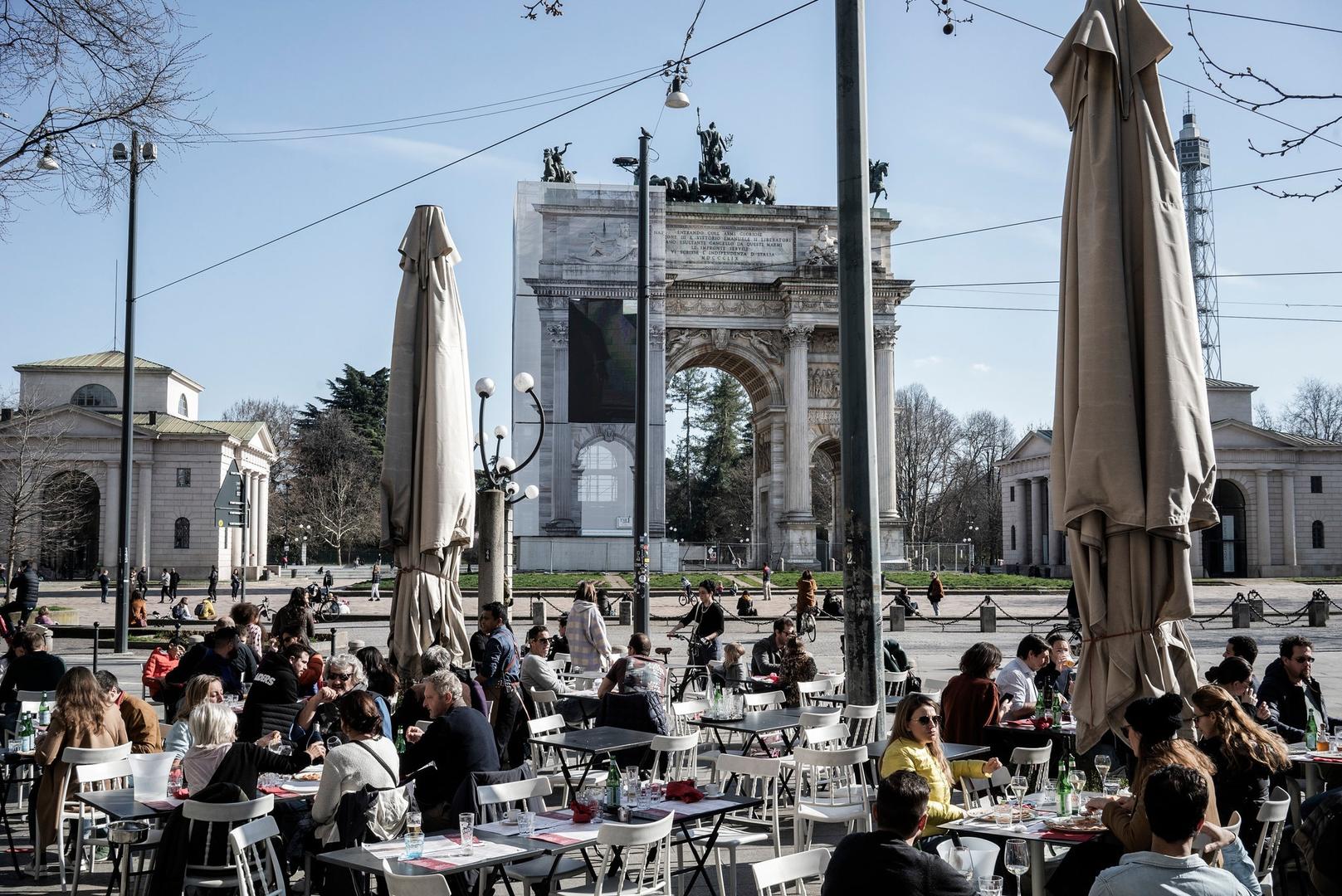 ▲ On March 8, local time, the first day of the quarantine order, the street cafes in Milan were still full of guests. According to the “New York Times”

trains are normally entered and exited without supervision.

Locals are confused about the quarantine order

. At Milan Central Station, the number of passengers is only a small number on weekdays. Despite government bans on travel, trains to and from Naples, Rome, Venice and Zurich, Switzerland, continue to operate normally, and there is no law enforcement to monitor the implementation of the new regulations. An employee of the train operating company stated that all scheduled trains are departing and returning normally.

Professor Michele Gera from a university in Lugano just got off the train from Rome and is waiting for a train to Lugano, Switzerland. “I read the statute, must travel people can do that. I just need to stay three minutes interchange station in Rome, so I think I can not carry the virus.” 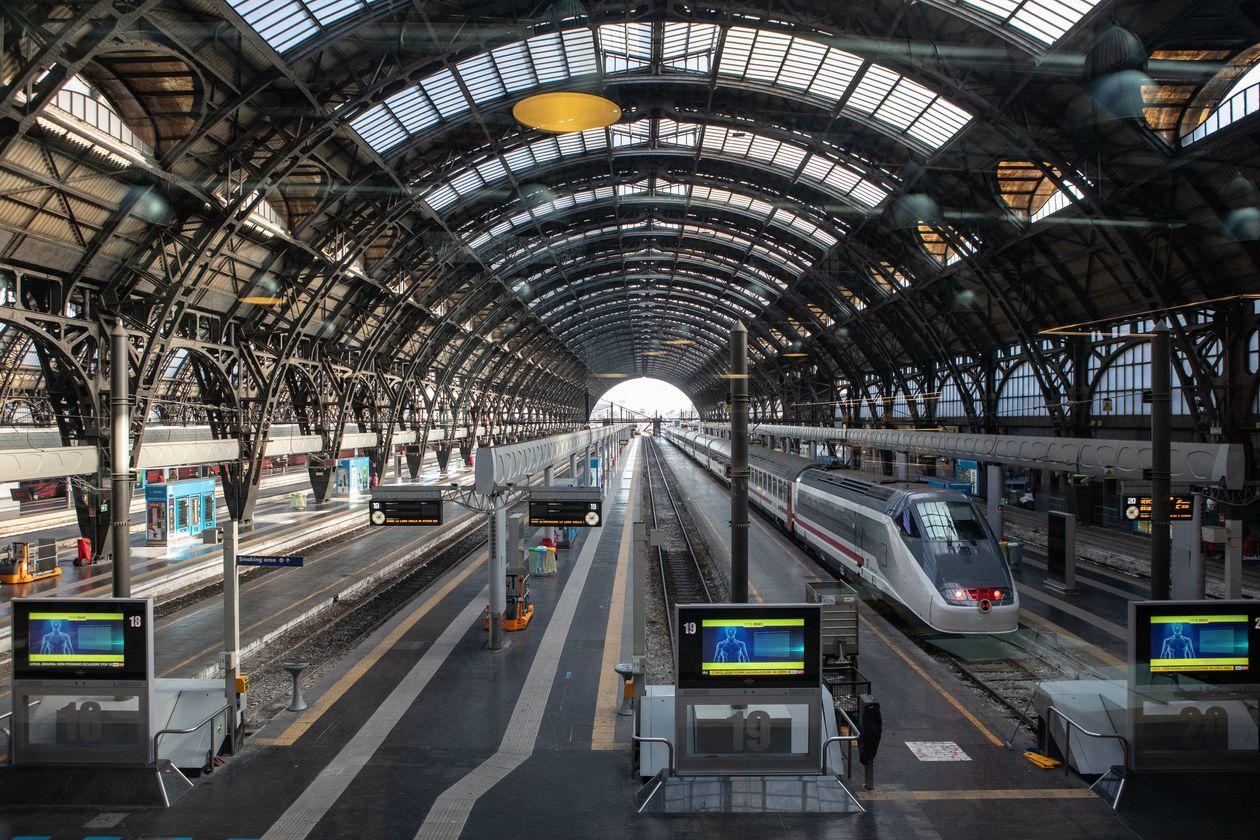 ▲ In the afternoon of March 8, local time, the sparsely populated Milan Central Station. According to the Wall Street Journal,

according to the government ’s quarantine decree, residents in the blocked area can only go out in emergency situations or work tasks that cannot be postponed, all large-scale assemblies are canceled, and weddings are not allowed in the northern region. Any violation Those in isolation orders will face about three months in prison. But at the same time, bars, restaurants, shops and churches will still allow limited openings, requiring people present to stay one meter away.

The sudden ban seems to have left the locals confused and completely unaware of how to deal with the situation and life in isolation. 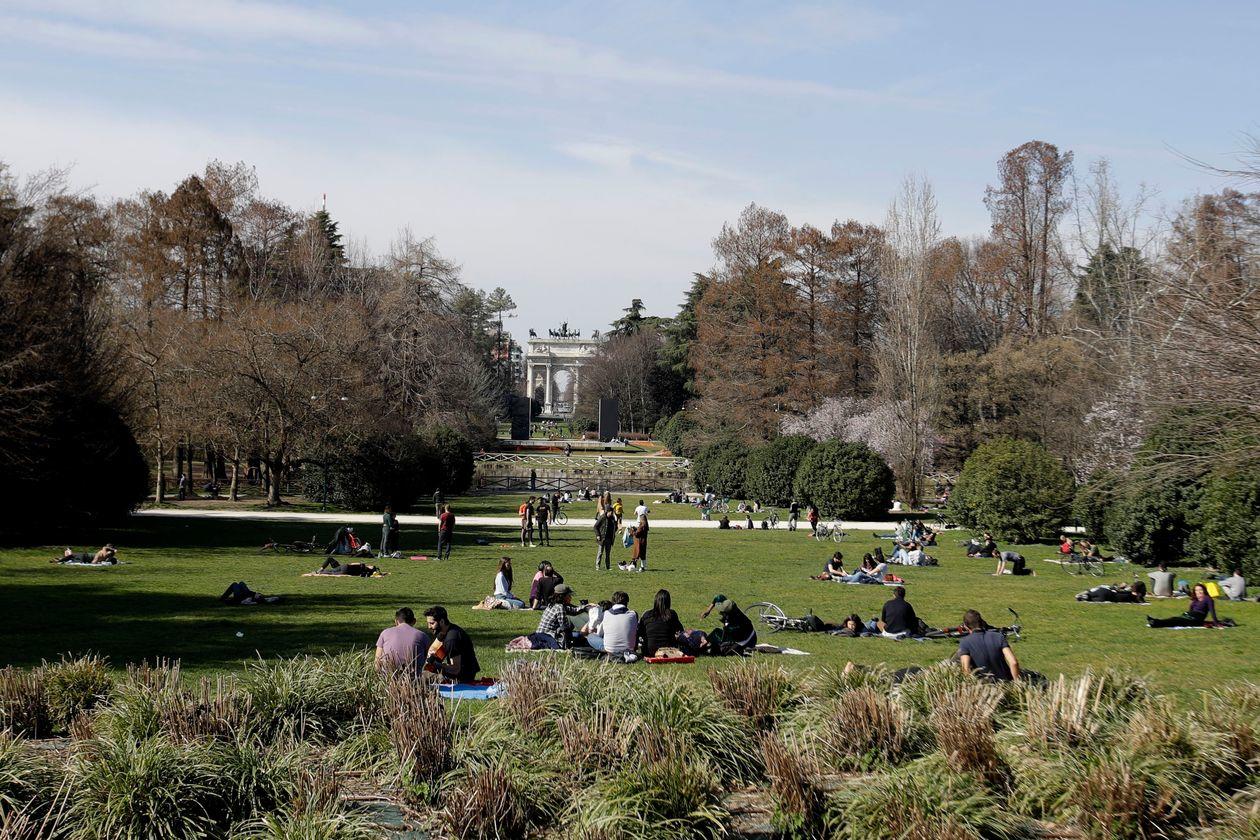 ▲ Milan Sempioni Park, there are still many people walking, cycling and running. According to the Associated Press

Governor of Veneto, the Wall Street Journal, he received calls from some people asking if they could go to the grocery store or have lunch at their parents’ home.

In the blocked Italian province of Treviso, Simona Patat, 44, said: “I’ve been discussing this with my friends all morning and some people say it’s clear we can go for a walk. But this is Really? I do n’t understand how much real freedom of movement I have now, and clarifying this will help us live a more peaceful life in an already difficult situation. ”

Riots in many due to the outbreak

prisons and relatives protested against the ban on visiting relatives Other measures:

Since the release of the isolation measures, various levels of riots and riots in prisons in Italy due to problems related to the new crown epidemic have resulted in the death of one prisoner and the injury of many others.

According to British media, the Italian newspaper “Republican” reported that the restrictions triggered riots and riots in Modena prison in the northern part of the country, and prisoners angrily said they were not allowed to see their loved ones. The Italian public interest organization Antigone said that the riot caused the death of one prisoner, injured two prison guards and about 20 staff had to leave the prison. 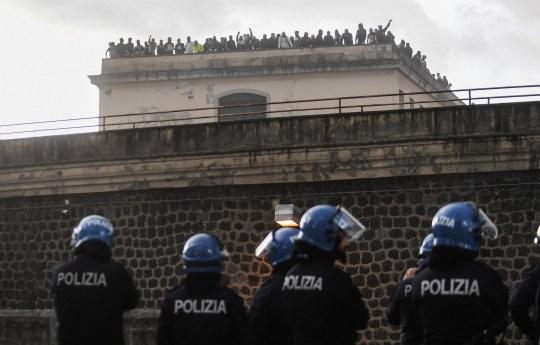 ▲ Riot police outside the rioting prison. According to the British Metro’s

According to the Asia News Network on the 9th, the Italian public interest organization “Antigone” said that in addition to Modena Prison, there are also Naples Poggioli Prison in the south, Frosinni Prison in the middle and Alexandria Prison in the northwest. Riots and riots have occurred, and prisoners have protested against measures such as banning family visits during the epidemic. 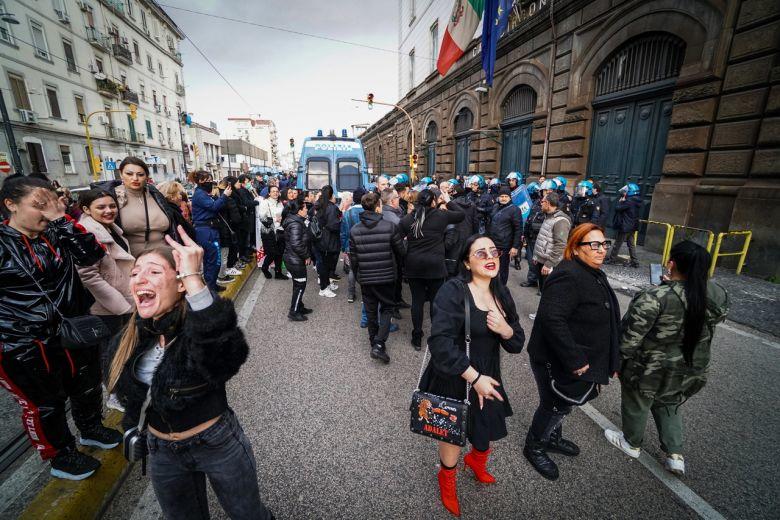 ▲ On March 8, local time, relatives of prisoners gathered outside the Poggioli prison in Naples, Italy to protest. according to the EPA

Similar incidents were staged in Padua in northern Italy and Bari, Foggia, and Palermo in the south. At Torregallo prison in Pavia, south of Milan, two prison guards were temporarily held hostage by prisoners, who stole the keys and released their associates. In Frosiny prison in southern Rome, police were deployed to restore order after about 100 inmates held themselves in an area of ​​the prison.

According to the Italian newspaper “News”, the trigger of the riot was the protests of prisoners’ families outside the prison door, which opposed measures to prevent them from visiting their loved ones. According to news outlet AGI, prisoners protesting have outlined a range of requirements, including the right to visit relatives, and have tried to negotiate with prison administrations.

Italy takes the lead in hard-core “blocking the city”,

On the other hand, according to the “New York Times”, Italy ’s comprehensive blockade of the northern region has had a huge response across Europe, exacerbating people ’s concerns about Britain, Fears of similar measures being taken by other countries. Some opposing European experts believe that the economic losses caused by blockades in parts of some countries may outweigh the health risks posed by the outbreak.

So far, no other European country has adopted measures like Italy, but as the number of confirmed cases soared to 1126 in France and Germany exceeded the 1,000 mark, both countries have taken corresponding actions, including stopping large public gatherings. Leaders of the two countries also convened emergency meetings to increase their response to the epidemic.

According to the Wall Street Journal, currently European countries have refused to close the border, but have stepped up inspections of tourists from Italy. 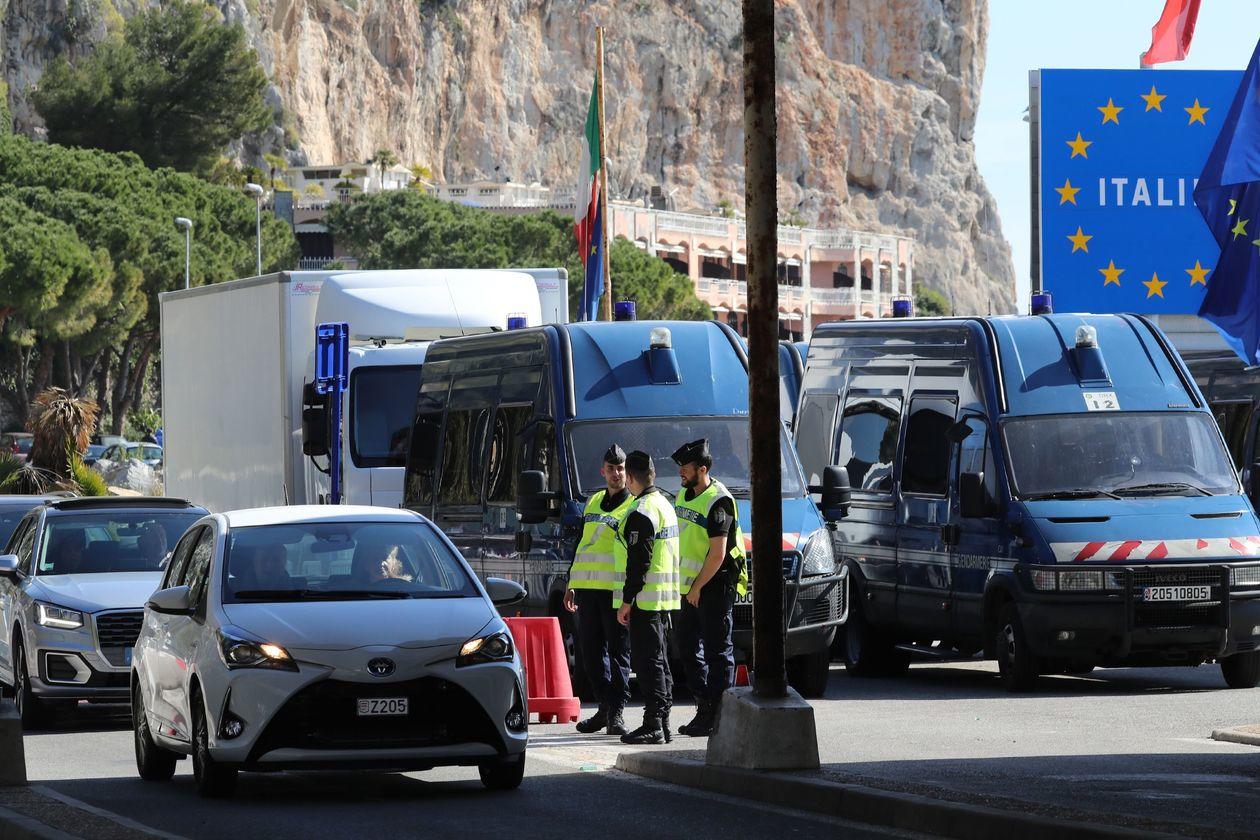 ▲ On March 8, local time, French police patrolled at the French-Italian border checkpoint. According to Agence France-Presse,

after the Italian government announced the quarantine order, the Austrian side said that it would strengthen quarantine of travellers from Italy by road or rail. Austrian Prime Minister Kurtz said in an interview that more travel restrictions may be announced in the near future. Croatia, which borders Italy, has also said it will take quarantine measures against truckers entering and leaving the border.

The German government issued travel warnings for much of northern Italy, but did not issue a ban. A German government official said the country’s new crown virus working group will update its policy on Tuesday, but urgent decisions may be issued at any time.

In the UK, medical experts say that Prime Minister Boris Johnson and other officials need to strike a balance between cautious response and preparation for more radical action by the population in the coming weeks. Pancania, an infectious disease expert at the University of Exeter School of Medicine, said: “The Italians have taken very drastic actions. Our pace should be modest. We don’t want to take drastic measures to put the entire society at a standstill.” 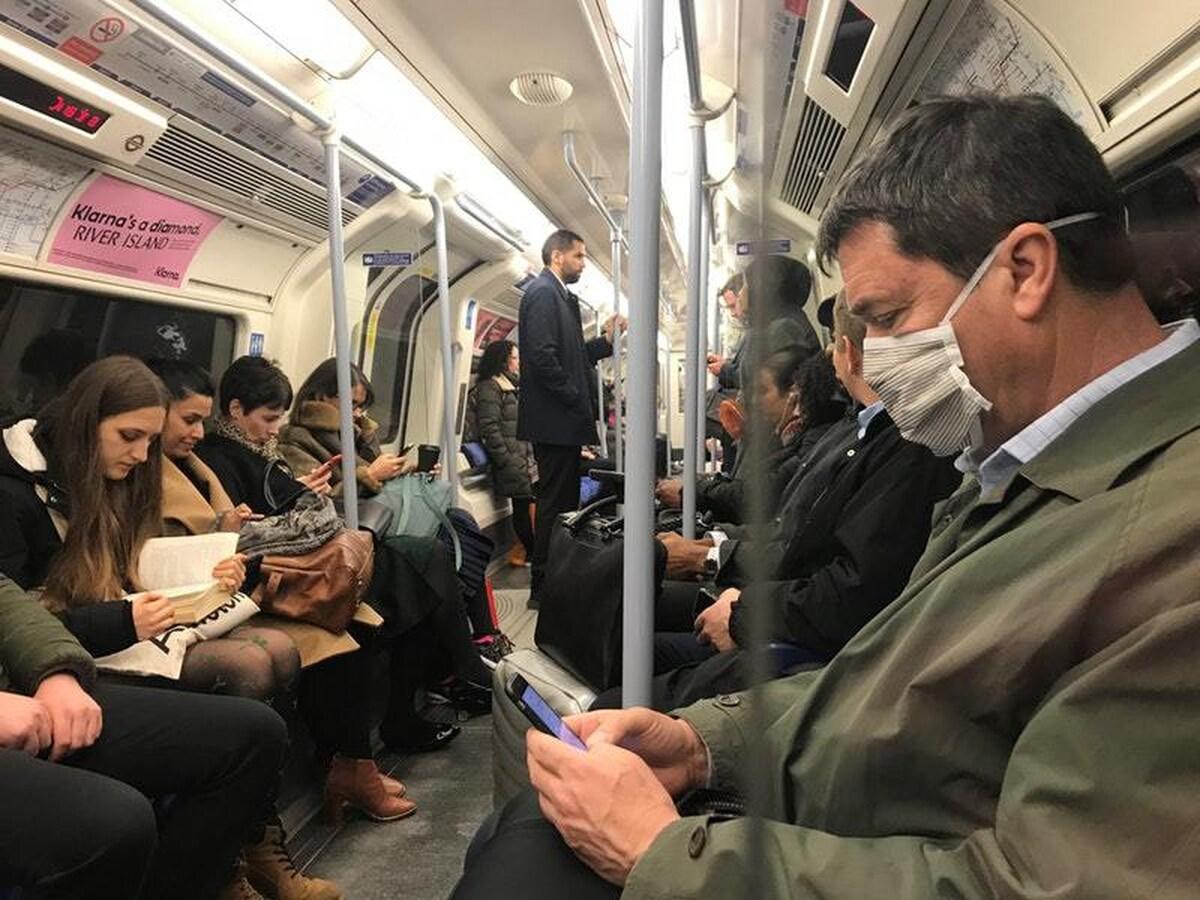 ▲ On March 4, local time, only a small number of passengers wore masks on the “Jubilee Line” of the London Underground. According to Reuters

, the difficulty of achieving this balance has been vividly demonstrated in Germany. Despite the spread of the epidemic, Bundesliga matches will continue as usual, with one of them taking place in a stadium in Mönchengladbach, which can accommodate 54,000 people, only a few miles away from Heinsberg, the most concentrated outbreak in Germany mile.

Heinsburg Chief Executive Stephen Pushe questioned whether the decision to continue the football match was wise. Although he has ordered the closure of schools and a ban on public activities, on March 8, he insisted that he would not order a complete blockade of the area. “I decisively ruled out the idea,” Push said in a video posted on Facebook the same day. He pointed out that “extreme measures” would destroy “the foundation of mutual trust we have always had.”